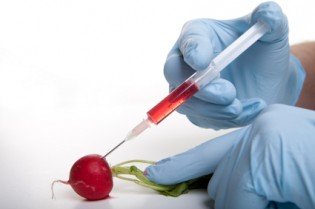 These days if you eat in North America, and increasingly all around the world, you are probably ingesting genetically modified organisms. If you eat a lot of processed food you are eating a substantial amount. I know many of us aren’t surprised to hear this report on how the GM DNA transfers to intestinal bacteria after all the other horrifying things we know they do. These genetically modified organisms have so many ways to harm our bodies it is truly flabbergasting when you come across someone who still believes they are somehow going to save the world. Please read the full article here.

There are no human clinical trials of genetically engineered foods. The only published human feeding experiment revealed that genetic material inserted into GE soy transfers into the DNA of bacteria living inside our intestines and continues to function. Even after we stop eating GE foods, we may still have the GE proteins produced continuously inside us.

As the Institute for Responsible Technology has noted, the genetic engineering process creates massive collateral damage, causing mutations in hundreds or thousands of locations throughout the plant’s DNA. Natural genes can be deleted or permanently turned on or off, and hundreds may change their behavior. Even the inserted gene can be damaged or rearranged, and may create proteins that can trigger allergies or promote disease.

The idea of having genetically engineered genes permanently living inside our guts has staggering implications:

And we’ve seen cross-species transfer of DNA happen before. A significant percentage of human DNA is actually viral DNA that became part of us over 40 million years ago. There is concern that virally transmitted DNA may cause mutations and psychiatric disorders such as schizophrenia and mood disorders. GE organisms may exacerbate this phenomenon.

Genetically engineered food genes transferring to our own genes could lead to problems like leaky gut syndrome…. Read More

Click here to cancel reply.
« The Failing Food System
Film exposes government raids on family farms »
We use cookies to ensure that we give you the best experience on our website.
If you continue to use this site we will assume that you are happy with it.