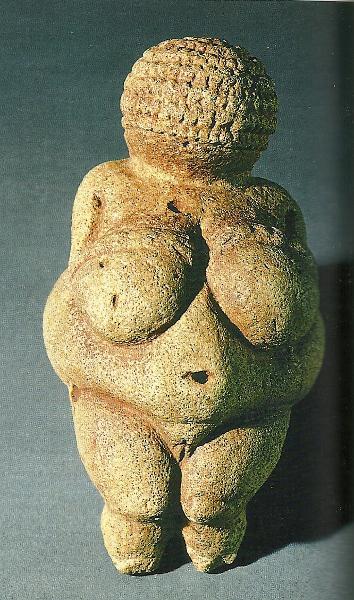 The first images of the human body from the European Upper Paleolithic, primarily three-dimensional, palm-sized female statuettes often referred to as Venus figurines, offer a case in point. Though little consensus exists about why the figures were created or what purposes they served, they have generally been interpreted as sex objects made from a male point of view. This view assumes women were passive spectators of the creative mental life of prehistory, their bodies relevant only as representative of male concerns and interests. The apparently exaggerated sexual attributes of the figurines have often been seen as magical symbols of fecundidty ultimately concerned with the increase of both animal and human populations. Whether magical or not, the belief that these figurines reflect a symbolic interest in sex and fertility has been most influential. Yet there is another plausible explanation for their creation and purpose: the figurines began as a form of self-representation by women (McDermott 1985, 1986). When examined, this proposal becomes so compelling that the only remaining question is, Why did it take so long to consider the logical possibility that a female point of view was involved? 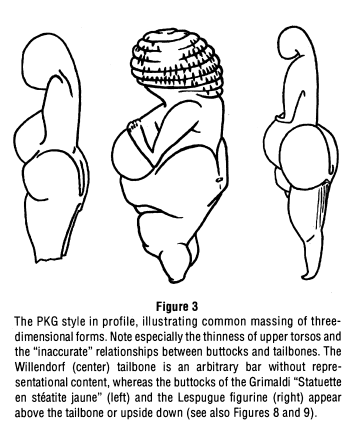 These first representations of the human figure the so-called Stone Age Venuses, Paleolithic Venuses or Venus figurines, constitute a distinctive class and are among the most widely known of all Paleolithic art objects. Most of the figures are about 150 mm in height and depict nude women usually described as obese…. These statuettes are carved in stone, bone, and ivory. Carved reliefs are also known.

One of the oldest of these figurines dates to 35,000 years ago.

The overwhelming majority of these images reflect a most unusual anatomical structure, which Andre Leroi-Gourhan (1968) has labeled the “lozenge composition.” What makes this structural formula so striking is that it consists of a recurring set of apparent departures from anatomical accuracy. The characteristic features include:

These apparent distortions of the anatomy become apt renderings if we consider the body as seen by a woman looking down on herself. Comparison of the figurines with photographs simulating what a modern woman sees of herself from this perspective reveals striking correspondences. It is possible that since these images were discovered, we have simply been looking at them from the wrong angle of view. 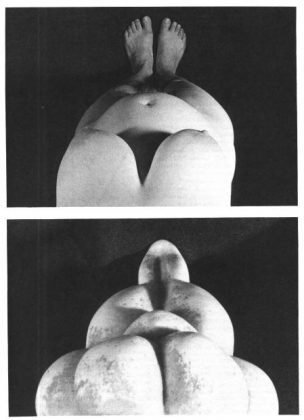 Although it is the center of visual self-awareness, a woman’s face and head are not visible to her without a reflective surface. This may explain why–although there are variations in shape, size and position in the heads of these pieces–virtually all are rendered without facial features and most seem to be turned down, as is necessary to bring the body into view. A woman looking down at herself sees a strongly foreshortened view of the upper frontal surface of the thorax and abdomen, with her breasts looming large. Such a perspective helps to explain the apparently voluminous size and distinctive pendulous elongation routinely observed in the breasts of the figurines. Viewed in this way, the breasts of the figurines posses the natural proportions of the average modern woman of childbearing age.

Other apparent distortions of the upper body undergo similar optical transformations from this perspective. For example, the inability to experience the true thickness of the upper body may account for the apparently abnormal thinness seen in the torsos of many figurines. Several figurines also have what seem to be unnaturally large, elliptical navels located too close to the pubic triangle. In a foreshortened view, however, the circular navel forms just such an ellipse, and when pregnant, a woman cannot easily see the space below the navel.

Similarly, as a woman looks down at the lower portion of her body, those parts farthest away from the eyes look smallest. It is also true that, for a pregnant woman, inspection of the upper body terminates at the navel with the curving silhouette of the distended abdomen (fig 4 and 5).

The perception of distortion is similarly resolved in a woman’s view of the side and back of her own body. When one rotates at the hips and raises and arm to look down the side, one’s field of visions includes an expanding strip of lower torso

and then a diminishing view of the leg. The feet may or may not be visible, often being obscured by the intervening body. From above, the forward projecting mass of the thigh and posterior location of the calf muscle are identical with a similar view of the bent-knee posture seen in numerous figurines (fig 6 and 7).

Depending on the effort expended to rotate and look under the arm at one’s backside, a woman’s view will either encompass a lateral segment of the lower back to the tailbone or, with greater exertion, include a strongly foreshortened, silhouette sliver of the upper buttock (fig 8 and 9).

Other Upper Paleolithic peoples may have preferred the more difficult of the two routes by which the human backside can be directly inspected. In an over-the-shoulder view, the dual masses of the glutei maximi muscles appear to project posteriorly into the visual field…. Seen only in three pieces from Italy and Southern France, this condition nevertheless demonstrates that the possibilities for self-inspection echo the actual range of regional and cultural variations encountered…. Again, what had been puzzling extremes of human representation become surprisingly realistic when considered from the probable point of view employed by their feminine creators.

The idea that women sought to gain and preserve knowledge about their own bodies provides a direct and parsimonious interpretation for general as well as idiosyncratic feature found among female representations from the middle European Upper Paleolithic. The needs of health and hygiene, not to mention coitus and childbirth, ensure that feminine self-inspection actually occurred during the early Upper Paleolithic. Puberty, menses, copulation, conception, pregnancy, childbirth, and lactation are regular event in the female cycle and involve perceptible alterations in bodily function and configuration. Mastery and control of these processes continues to be of fundamental importance to women today….

Perhaps the figurines served as obstetrical aids, the relative sizes of the abdomens helping women to calculate the progress of their pregnancies. Read the full article here.

Oh and by the way, if you would like to create your own Willendorf Venus here is a delightful crochet pattern to help you do so!

Click here to cancel reply.
« Icelandic Hot-Springs Bread
How therapists are using the rituals of eating to treat victims of trauma »
We use cookies to ensure that we give you the best experience on our website.
If you continue to use this site we will assume that you are happy with it.