A Meditation on Mold

by An Offal Experiment | 2 Comments »

Stage one of mission soy sauce is complete and stage two is well underway. Stage two is the development of mold on the soya bean and wheat cakes. The original recipe called for wrapping the cakes tightly with damp paper towel and saran wrap. This didn’t work for me. 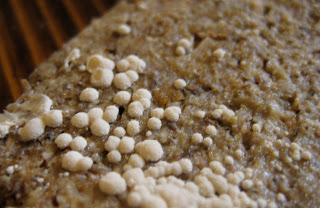 After about a week, I checked on my soy cakes and I found day-glo paper towel and very little mold. This didn’t seem right and I am sure the ancient Chinese peasants who created soy sauce didn’t use paper towel or saran wrap.

Plan 2: Arrange soy cakes on the back of mini muffin tins, squirt with a little water, seal them in and give them more time.

After about two more weeks, I decided that the mold development was sufficient. 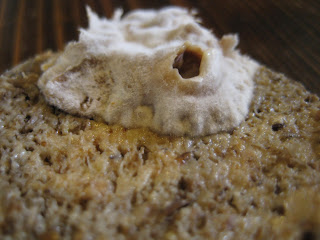 Before setting them out to dry in the hot summer sun, I wanted to capture the best of the best in terms of mold development.

I love this one to the left. It looks like a little mini-volcano. I had my eye on this mold pile as it grew, starting out as a beautiful coil, over time it collapsed on itself and developed lovely little white fuzz. 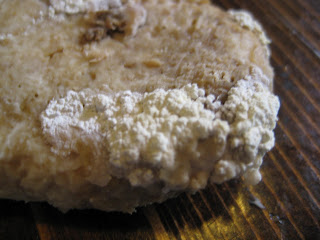 This is another interesting one that looks a bit like cheese.  The darker brown patch at the top of the cake was also originally a fluffy white coil but then collapsed or perhaps got crushed by my rough handling… 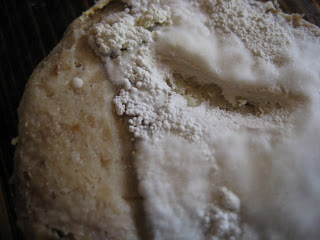 This is one of my absolute favorites. It’s as if you are flying through a bank of clouds in an air plane and all you can see are fluffy, fluffy clouds.

I would love to know what is going on right now in the mold colonies. Why are some areas fluffy and some cauliflower-like? 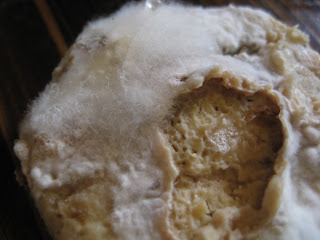 And for the finale mold shot… Look at those delicate white hairs. The gaping hole is where I ripped the little cake away from the pan.

I’m such a beast in the kitchen.

One thing I should mention for those inspired to make their own soya sauce is the smell. You are basically making blue cheese (from a smell perspective) and after about a week the soya wheat cakes start to smell like ammonia and sour blue cheese. You will probably find the odour offensive though my roommate hasn’t mentioned it yet so maybe it is not as bad as I think it might be. She is also used to me brewing up weird things on an almost constant basis. Now that the moldy cakes are in the living room window getting baked by the sun the scent might become stronger and weave its way through the apartment a bit more.

I’m not yet at a point where I can see or smell soya sauce. I keep sniffing the bottle I have in the fridge to see if I can detect any similarities, this might happen once I start to ferment my mold cakes.