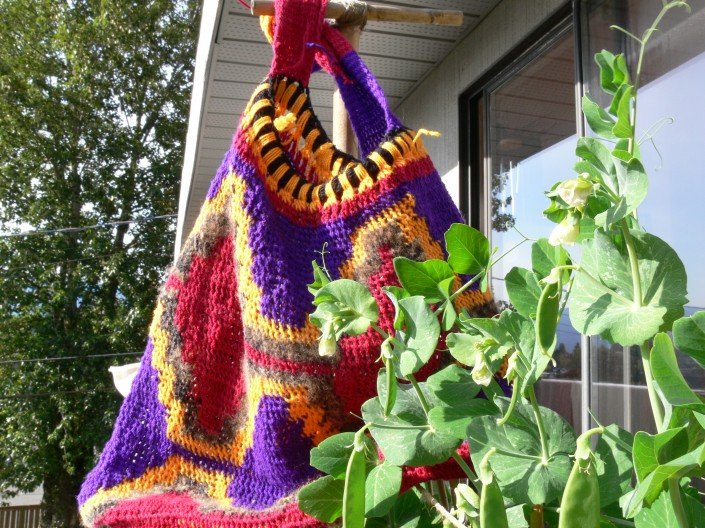 The last time I spent more than a couple days in Papua New Guinea I learned how to make a bilum from a wonderful highland woman by the name of Kapaim. She was very patient with me–I was determined to finish before I had to leave to begin culinary school. I worked day and night, stubbornly insisting on rolling most of the string myself. I finished the job in time–I was worried that I wouldn’t be able to figure out how to finish if I didn’t get it done. Even then it took me at least three weeks and this is a small bilum! Unfortunately I didn’t manage to remember how to start a new one and haven’t been able to make another one since. I have just discovered these great detailed instructions for making a bilum on The Papua New Guinea Bilum facebook page. 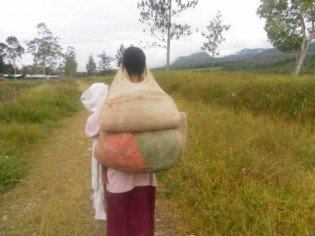 Image from www.hagenhandicrafts.com
For those of you who are wondering what in the world I am on about a bilum is the traditional handmade string bag that all women in Papua New Guinea know how to make. They were originally made with fibre from various local trees and often included the fur from a tree kangaroo (neither the trees, nor the tree kangaroo are killed to make these bags). These days they are generally made from imported yarn, although you can still find traditionally made fibre bilums in the highlands. Check out this great blog that shows the detailed process of harvesting, drying, rolling and weaving a bilum from natural fibre.

I grew up in Mt Hagen which is one of the main highlands cities and was surrounded by these colorful bilums for most of my youth. My younger siblings were rocked to sleep in a large bilum, and the women of our village were constantly either rolling string, working on a variety of colorful bags or lugging huge amounts of sweet potato to and from the Hagen market on their backs in a bilum. Bilums are very useful in that they can stretch to amazing sizes and hold incredible amounts of produce (or baby!). In Papua New Guinea, the women do pretty much all the work while the men generally sit around and treat them badly. Women do most of the gardening, take care of the pigs (in fact traditionally they lived with the pigs while the men lived together in the men’s house). 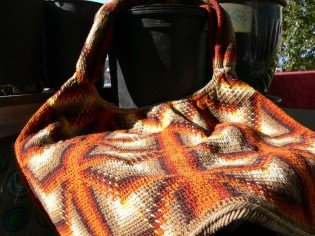 Handmade diamond bilum. Click on image to purchase via ArtFire.com
I still remember our daily trip into town to go to school, we had a series of second-hand vans that often needed a push to get them started in the morning. On our journey to school we would pass many villagers on foot on their way to town. My father would generally try to pick up as many old ladies buried under their huge bilums as possible, but if we stopped near a pack of young men, they would rush to the car, shove the old woman out of the way and push their way in. My father would insist that they get out of the way and let in the old woman and her bilum stuffed with sweet potatoes. (The men were generally carrying nothing).

Bilums are made with a sturdy woven handle and the bag is usually carried with this strap placed over the forehead with some padding underneath if it is very heavy and the weight balanced along the spine. Often the huge bag will totally cover the lady underneath it so that it just looks like a sack of potatoes walking down the road on a couple of feet. Older women, who have been carrying this weight every day of their lives generally develop pigeon feet from the constant pressure. In my opinion Papua New Guinean women are very amazing, strong women. Most of them are sexually and physically abused as well as having to do pretty much all of the work to support their families to survive. 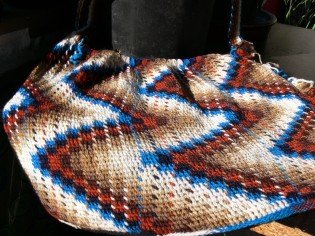 Unique handmade bilum. Click on image to purchase via ArtFire.com
The bilums they create reflect themselves, they are strong, practical and beautiful works of art. There is a huge variety of designs and colors. They have even started making dresses with this weaving technique! Since there is such a huge push these days in the Western world to wean ourselves off of our addiction to plastic bags I highly recommend getting yourself a bilum. A well made bilum will last 20 or more years and will be the envy of everyone when you pull it out at the farmers market and stuff it to the brim with fresh local produce. I have found a couple websites that are selling them in Papua New Guinea. Unfortunately the price of shipping is rather prohibitive. I have a couple of bilums that a friend brought back for me to sell and if I manage to sell them I will see if I can get some more via the wantok network.

These bilums take a few weeks to make and the price reflects the amount of time put into each bag. But as I mentioned earlier they are beautiful, unique, last forever, can hold much more in volume and weight than you might expect. And by buying one you can support the women of Papua New Guinea who are often raped repeatedly from very young ages and as they get older they are frequently beaten by drunken husbands, fathers and brothers. In fact the website Hagen Handicrafts has bilums available that are mostly made by women with HIV/AIDS from sexual abuse.

How to make a Bilum:

How Traditional Fibre Bilums are Made:

Click here to cancel reply.
« Cleopatra’s Secret to Success
Biofilms, Parasites, Mold and Electromagnetic Frequencies »
We use cookies to ensure that we give you the best experience on our website.
If you continue to use this site we will assume that you are happy with it.