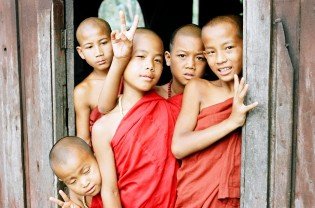 An interesting side-note about the legend of Shambhala is that in it, a being from Venus, Sanat Kumara, comes to Earth to help bring out the light within each of us, which we are unable to do on our own. An Australian meteorologist has also found that on the days that Venus was closer to the Earth, the Earth’s magnetic fields calmed down. Other astrologers have found that Venus’ close vicinity to Earth is linked to births of famous artists and musicians.

A couple years later I participated in a full moon meditation in Aotearoa (New Zealand), invoking light and love for healing the Earth. According to this particular Shambhala tradition there are three major full moons (Aries, Taurus and Gemini) during which the healing intentions for the earth are particularly powerful. Meditating in groups helps to bring these energies through (See the work done by HeartMath Institute on heart coherence). The man who organized the meditation told me Aotearoa is an anchor point, or a gateway for bringing through the energies of Shambhala. The following is some more information on what Shambhala is and how we can help it to return here on earth from Tony Knight. There is a group in Vancouver doing group meditations and The Great Innvocation at the Roundhouse and other groups all over the world, if you’d like to join us simply follow this link.

We know that Shamballa, as the Etheric ‘City of Light’ did in fact exist upon the physical realm of earth, in the Gobi desert region of Mongolia, for many millions of years, in between destructions and re-buildings, until approx 60,000 years ago when it ‘ascended’ to where it could no longer be destroyed. Since this cataclysmic event there has been various great periods or epochs on Earth, such as the celebrated Lemuria and Atlantis, which I believe were founded by great masters from Shamballa and created on the basis of the timeless teachings and the universal laws of creation. Each time the Earth goes through another major time cycle of 13,000 years there is a huge upheaval or cataclysm, which spawns the beginning of the next ‘Golden age’ and the highly developed souls from previous ‘glory days’ are sent forth as builders and seed sower’s for the next upward cycle to complete the 26,000 year cycle. This just happens to coincide with the completion of our zodiacal orbit around our Great Central Sun. Rather than seeing these cataclysms as a “disaster”, they are in fact in keeping with the divine Plan as they act as an evolutionary ‘booster’ for the next Age, each one building on the last. Now we have come to that stage in our Earths evolution where we are at “The End Times”, with the present cycle of 26,000 years due to end in 2012 as predicted by the Mayan Indians and many other prophesies.

I believe where Shamballa fits into this bigger picture is that it is primary to Earth, it was and still IS the direct source of all true wisdom and God consciousness for humans. It was the place of true education for our souls, during its legendary time on this physical planet and now that it’s ‘above’ Earth, also serving the multi functions as generator, moderator, transmitter, transmuter of ALL universal and God energies, so that we may integrate these and realise who we truly are and why we are here. We are the ‘God’s in embreyo’ waking up to our role in this divine dream play, becoming conscious as light beings to enable the divine Plan to be effectively carried out. Deep within our hearts and cellular memory’s there is a vision of “thy pure land” and as we dream of finding paradise on Earth, we are also connecting with our ancient memories of when we were there! We have all reached enlightenment before and we are now here again to re-member ourselves. Enlightenment is the most natural thing to be and it is simplicity and joy itself!

Certain souls in Tibet have full awareness of Shamballa both in the esoteric and exoteric ways. They have the Kalachakra mandala which depicts the initiation of the “journey through the wheel of time” and the destination? Shamballa! The Kalachakra Tantra belongs to the highest level of Mahayana Buddhist teachings and a young man named Tsi-lu-pa who claimed to come from the Kingdom of Shamballa originally brought it to India. It was then introduced to Tibet in 1026 AD. The Tibetans also have a mandala which depicts The Kingdom of Shamballa, which shows a ‘Lama or wise one’ in his temple in the centre of a wheel with snow capped mountains forming the outer wheel and spokes, with rows of houses and other temples in between. Below the wheel are the human masses, trying to access Shamballa, and above in the clouds is Buddha and Kali goddess over-lighting everything and everyone. Buddha is now the ‘head’ of Shamballa and when you look at all the evidence, it is obvious that the Tibetans have preserved all the original wisdom from when Shamballa resided on Earth in Mongolia. The ‘Shangri-la’ paradise in Tibet is vibrating at a higher rate than Earth (i.e the 5th dimension) and is an adaptation of the true etheric Shamballa. The legend states that the hidden land of Shamballa lies within 8 snow capped mountain ranges which resemble the 8-fold petals of a lotus. (The centre of the Kalachakra mandala). At the heart of Shamballa is a mountain shaped like a 4 sided pyramid so as to resemble a 3-dimensional mandala.

The paradise Shamballa, or exoteric ‘Shangri-la’ version, is of upmost importance to the Tibetans and it is significant that many people have searched for this pure land and have not found anything despite countless journeys, however we know it exists through the few documented souls who have made it through. Few make it because in the Legend of Shamballa it says that only those who hear the ‘call’ (i.e ready for the jump into the 5th dimension or world) can enter, and you must have completed various soul initiations and be at a certain level of consciousness, purity of intent and heart/mind to actually hear the call. This way no one gets hurt and we all learn in a proper order dependant on where we are at in our soul development. The call is “KALAGIYA”. To most this does not mean a thing, but as time rolls on many will know, as it is human destiny that we again enter the halls of records and sacred temples where man/women will walk as masters/Godesses in the paradise land called EARTH!

‘Lama, how does it happen that Shamballa on Earth is still undiscovered by travellers? On maps you may see many routes of expeditions. It appears that all heights are already marked and all valleys and rivers explored.’

Verily, there is much gold on Earth, and many diamonds and rubies in the mountains and everyone is so eager to posses them! And so many people try to find them! But as yet these people have not found all things – so, let a man try to reach Shamballa without a call….Many people try to reach Shamballa uncalled. Some of them have disappeared forever. Only few of them reach the holy place, and only if their karma is ready.’

If we make our own bodies sacred temples we will by default have to make the earth a sacred temple–Shambhala.