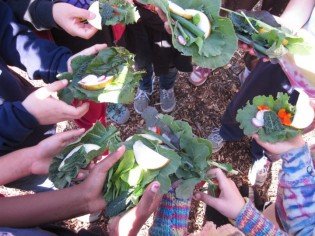 The edible schoolyard project that Alice Waters began with the Martin Luther King Jr. Middle School, in Berkeley in 1995 is a truly visionary project. Since it’s beginning 17 years ago it has spread across North America as well as the world. Alice Waters of Chez Panisse restaurant is the mother of the Delicious revolution that is sweeping the globe. She has been my inspiration ever since I started cooking. I have also had the chance to visit the original MLK Edible Schoolyard so this movement holds a very special place in my heart. Unfortunately, as the article below lays out, the future of this program looks like it might get cut off, just when we need it most–when the USDA thinks it is appropriate to feed kids pink slime for lunch – yuck.

Under existing guidelines, the schools will no longer qualify for federal funding because they have fewer than 50% of their students enrolled in the free and reduced-lunch program, according to Leah Sokolofski, who supervises the program for the district.

Berkeley has an international reputation for its edible schoolyards, where public school children of all economic means learn what it takes to grow a radish and sauté some chard. Such funding cuts to the program, whose total budget is $1.94 million a year, would represent a significant setback in the city’s pioneering efforts to date.

School gardening and cooking champion Alice Waters, whose Chez Panisse Foundation helped fund the Edible Schoolyard at Martin Luther King Jr. Middle School, expressed dismay at the potential budget cuts to programs. “It’s inevitable cuts will come — people think these programs are dispensable and the state of California is in a financial crisis — but it’s a tragedy,” she said.

Waters recently raised over $500,000 to launch the Edible Schoolyard Project (ESP), an online resource that shares curriculum and best practice principles for garden and cooking programs with schools around the country. ESP has affiliate programs in San Francisco, Los Angeles, New Orleans, and New York. “We have to continue to make the case for why an edible education is so important to the health of every child and the health of the whole country,” she said.

BUSD school garden and cooking programs are funded through September 2012 through Network for a Healthy California, a state program that distributes federal monies to local school districts through a three-year grant. The network seeks to improve the health of low-income Californians through increased fruit and vegetable consumption and daily activity. READ MORE

Click here to cancel reply.
« Revenge of the Candida Fungus
Shambhala aka Shangri-la »
We use cookies to ensure that we give you the best experience on our website.
If you continue to use this site we will assume that you are happy with it.