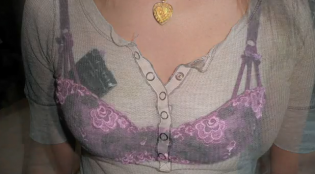 I had an interesting experience recently when giving a craniosacral therapy session to a woman who had just come back from a doctor’s appointment. In passing she mentioned it was a mammogram. It didn’t register with me until later when I was completely wiped out and developed an unusual rash on my chest that I put the two together. [When doing a deeply resonant therapy it is best not to work on someone who has just been radiated–note to self!] I have been uncovering more and more information lately demonstrating that low frequency EMFs are especially damaging to breasts and gonads. No wonder we have an epidemic of both breast and prostate cancer!

Not only that but as the paper below points out, the ‘standards’ for the levels of permissible radiation levels are based on adult males, not taking into consideration the difference in thickness of skulls in kids and adults. I had another experience recently talking to a lady on the bus who was bragging to me about her new company sponsored smartphone. When I asked her if she had heard about the studies clearly showing a 40% increase in brain tumors after just using the phone for 30 minutes a day, she immediately dismissed it all as poppycock and nonsense, “just like all those other tales about how microwave ovens were bad for you.”

The world is still clearly mainly insane. We have to change our habits, cellphones are actually more dangerous than cigarettes, their ‘second hand radiation’ causes a lot more damages then second hand smoke. Yet we give these wireless killers to our children and think it is cute.

Your bra is not the place to keep your cellphone. Dr John West MD Founding director of Breast Care and Imaging Centre of Orange County tells us why:

That’s the bad news. The good news is that this paper describes an alternative FCC approved process already used extensively within the Food and Drug Administration (FDA). The alternative process uses MRI-scans of a set of real human beings to determine the amount of radiation absorbed in every tissue. It is called, the “Virtual Family” and includes a 5-year old girl, a 6-year old boy, an 8-year old girl, an 11-year old girl, a 14-year old boy, a 26-year old female, a 35-year old male, an obese male adult and 3 pregnant women at 3rd, 7th and 9th months of gestation, allowing for appropriate cellphone certifications for the most vulnerable cellphone users.

In contrast, the existing cellphone certification process uses a plastic mannequin head, SAM, of a very large man with a liquid inside the mannequin which assumes all tissues in the head are identical. A robot positions a sensor within the liquid and calculates the maximum Specific Absorption Rate (SAR) with a tolerance of +30%. The FCC exposure limit is SAR=1.6 Watts per kilogram of tissue (1.6 W/kg). Because of the wide tolerance range, SAR values can be as large as 2.08 W/kg, 30% higher than FCC exposure limit.

The paper provides a history of how exposure limits have been developed over several decades and continues with an exposition of chronic cellphone health effects (humans, animals and human cells) reported in science papers. It then describes the two FCC-approved processes for cellphone certification: the existing cellphone process (exclusively used) and the MRI-based computer simulation process (never used for certification). Next it compares the efficacy of the two processes.

The paper explains in detail that the existing exposure limit process is so far from the original intent that we can only wonder what happened! Here are some examples:

Click here to cancel reply.
« Ancient Food Forests: Morocco and Vietnam
Replacing A Smart Meter With A Safe Analog Meter »
We use cookies to ensure that we give you the best experience on our website.
If you continue to use this site we will assume that you are happy with it.