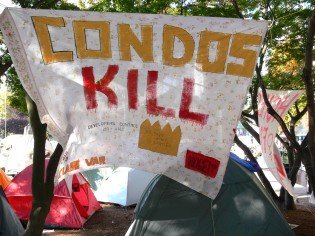 I finally managed to stop by Occupy Vancouver the other day and even though the weather is terrible and cold, it still feels like a community down there. I haven’t been able to spend as much time as I had hoped, but I really love knowing that there is a village in the heart of the city that I live in. What I’d really like to see is the city offer to pack up that dangerous art/fountain and put it away for now, and instead build a proper area for fire-pits–maybe roast a pig or two. It’s cold there! I really liked this description of Vancouver’s occupy movement by Steve Anderson:

The other day I decided to visit the site of “Occupy Vancouver.” I found a network of service tents scattered among open spaces, filled with people engaging in what seemed like unending conversations about politics, democracy and the future. An ethos of sharing and collaborating pervaded the space.

I’ve only visited Occupy Vancouver three times, but each time it has changed and evolved. I noticed what appears to be a community that operates on co-management, collaboration, sharing, trust and overall goodwill. There’s a fair bit of complexity as well; a network of 22 committees leads the work in key areas, with major decisions being made in their General Assembly. The committees are open to anyone who shows up. In short, the space seems to function based on a gift economy where people contribute based on their abilities, desires and needs. 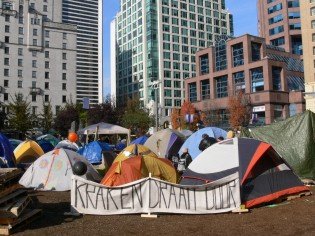 At first I couldn’t put my finger on it, but I soon realized that Occupy Vancouver reminds me of the “unconferences” I’ve attended. Unconferences are a kind of event common in the software industry. At unconferences, a topic is agreed to in advance and participants organize themselves into sessions on the day of the event. Unconferences were inspired by the non-hierarchical, collaborative nature of open-source software development and the Web in general.

In a similar way, Occupy Vancouver feels like an ongoing space infused with Web values and practices. Its structure of participation mirrors that of the online encyclopedia Wikipedia, which is one hundred percent produced by volunteers. While Wikipedia entries are open to be edited by any Internet user, most people participate just by viewing and maybe sharing entries; a smaller group of about 90,000 people actively edit pages and a still smaller group makes the vast majority of edits and upholds the rules.

At Occupy Vancouver, a large group of thousands of people shares material online, attends key gatherings, and engages with services. A smaller group attends the General Assembly and helps govern the space and an even smaller group puts in the daily effort needed to keep the committees and services operating. Both Wikipedia and Occupy Vancouver survive in part because they make participation easy – they let participants engage at the level they’re comfortable with and in a manner meaningful to them. Read More

I’ve been spending a tiny bit of time on diaspora lately, and I picked this article up from Randall’s feed. I’m starting to get the hang of it but I need some more friends! So please let me know if you want an invite. A great description of Ubuntu which ties into the above-mentioned article quite nicely. It’s based on an entirely different approach than what we have been taught. The following is an excerpt from The Spirit of Ubuntu and it’s relevance in today’s society by Henno:

In short, The Spirit of Ubuntu says you are who you are because of your interaction with the community around you, if the community thrives then you will thrive.

I firmly believe that the time is right for the human race to evolve beyond the constraining “I think, therefore I am am” Western Philosophy which revolves around the interests of the individual towards something more in line with the Spirit of Ubuntu.

Evolve you might ask? Yes, evolve I say, since it would be impossible for you to deliver a positive contribution towards your local community if you do not know yourself.

If more people embrace this philosophy I believe that we can see a Renaissance of global proportions which would ensure the survival of the human race as a species and further our own evolution as being who can actually decide between right and wrong. Read More

Sign this petition to allow the Occupy Wallstreet Movement to continue:

I/We stand with Occupy Wall Street and all Americans who wish to defend our disappearing liberties in demanding that the Mayors of America respect the First Amendment and the rights of our citizens to assemble and express themselves.