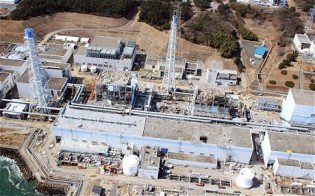 I think this is important information so I just wanted to quickly share it with everyone. More reports have been coming out lately which show just how much damage is being done to our earth:

France’s l’Institut de Radioprotection et de Surete Nucleaire (Institute for Radiological Protection and Nuclear Safety, or IRSN) has issued a recent report stating that the amount of radioactive cesium-137 that entered the Pacific after 11 March was probably nearly 30 times the amount stated by Tokyo Electric Power Co. in May.

According to IRSN, the amount of the radioactive isotope cesium-137 that flowed into the ocean from the Fukushima Daiichi nuclear plant between March 21 and mid-July reached an estimated 27.1 quadrillion becquerels. Read More

Professor Chris Busby outlines how helpful taking calcium and magnesium supplements are for helping to protect your DNA. The following is pulled from the information on youtube.

Chris Busby updates Japan on what to do to reduce the risk of radiation damage from the contamination from the Strontium-90, Uranium and Plutonium dispersed widely over northern Japan.First of all, evacuate the children and evacuate yourselves. The contamination of the ground and the food is a serious health hazard. Car air filter analysis shows the material on the ground becomes airborne and can be inhaled. Get away If you can; but if not not then you can reduce the access of these radionuclides to the DNA.

Increasing the Calcium concentration, (Calcium which stabilises the DNA phosphate backbone), will inhibit the equilibrium binding of radionuclides like Strontium, Uranium, Plutonium and other high DNA affinity elements and complex ions. The Iodine thyroid blocking method is based on the same thermodynamic chemical equilibrium idea. It is easy to buy Calcium/ Magnesium tablets from health food shops where they are not expensive.

The adult dose is about 800mg Calcium and 350mg Magnesium. Reduce the dose for children in proportion to their relative weight, so for a 10-year old, about 400mg Calcium and 175mg Magnesium. This is a critical issue: it will save lives and it is so simple and is absolutely harmless.

Visit these sites for more info:

Image from Japan: Fukushima disaster released twice as much radiation as initially estimated