Sunflowers and Bacteria Clean up Radiation 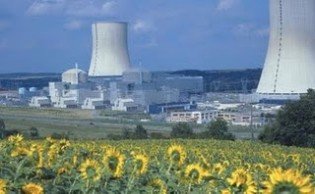 I read about sunflowers being able to clean up radiation a few months ago, but only now stumbled upon this project in Japan which is involving the whole country in growing and planting sunflowers near Fukushima to help remove radiation from the soil. What a beautiful cheerful flower to have growing in such a damaged area, the sunflower project is already in full swing. As it turns out bacteria are also able to remove radiation from the earth, although that doesn’t seem to be as simple as planting sunflowers. In the meantime mushrooms have been discovered in Chernobyl that are thriving on gamma radiation — isn’t mother nature incredible?

This slime, a collection of several fungi actually, was more than just surviving in a radioactive environment, it was actually using gamma radiation as a food source. Samples of these fungi grew significantly faster when exposed to gamma radiation at 500 times the normal background radiation level. The fungi appear to use melanin, a chemical found in human skin as well, in the same fashion as plants use chlorophyll. That is to say, the melanin molecule gets struck by a gamma ray and its chemistry is altered. This is an amazing discovery, no one had even suspected that something like this was possible. Read More.

It is said that Sunflowers can remove 95% of the radiation in soil in 20 days. 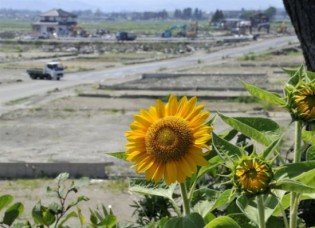 The devastating earthquake and tsunami that struck Japan in March caused a nuclear disaster that left high quantities of radioactive cesium and other toxins in the soil in around the Fukushima prefecture. But a recent campaign has been launched by civil servants and independent entrepreneurs who are focusing their efforts on the use of sunflowers to clean contaminants from the fallout zone.

The plants and seeds that grow from the contaminated soil will be gathered and disposed of safely, but meanwhile, they will create a brilliant yellow landscape, a kind of spectacle of hope and healing that will ideally be visible from space. In addition to leaving 23,000 people dead or missing, the earthquake and tsunami damaged the Fukushima power plant, which has been leaking radioactive material for several months. But sunflowers represent a hopeful beacon and a symbol of reconstruction, and as they grow, they help to absorb cesium from the soil. Sunflowers and plants with similar biology were also used in radioactive cleanup efforts after the Chernobyl disaster in the Ukraine. Read More.

How Bacteria Clean Up Nuclear Waste

Bacteria can clean up toxins, oil spills and nuclear waste, essentially by eating the stuff. But until now nobody was quite sure how they did it. Gemma Reguera and her team at Michigan State University found that the key is a structure called the pilus, a hair-like appendage that acts like a wire.

The bacteria, called Geobacter sulfurreducens, transfer electrons via the pilus to the metals that they feed off of. Transferring the electrons gives the bacteria energy. It also changes the ionization state of the metal, changing it to a form that precipitates out of water. A colony of Geobacter living near a pile of nuclear waste would extract the uranium, making it easier to handle and remove. Read More.