Beware. The Green Man is Back 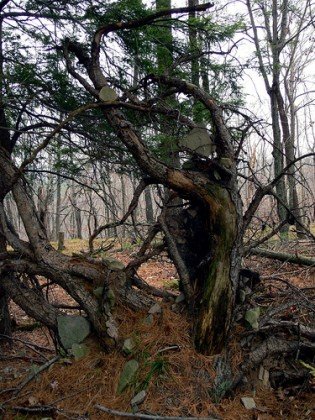 With the summer in full swing and my various gardens demanding attention, I’m having trouble keeping on top of blogging (!) We also recently had a huge family reunion for my Aunt and Uncle’s 50th wedding anniversary. I met lots of family I didn’t know and reintroduced myself to cousins last seen 20+ years ago in India. The event was really touching, the grandchildren performed a Bollywood-style dance routine in their honor, and a slide show of various highlights from their lives–children, healing and family fun–brought home the power of relationships and how the cycles of life–birth and death, illness and health–roll on and on, little affected by the stresses of our daily lives.

I also have a new job (!) … as social media manager of Body Intelligence, the craniosacral therapy school that I trained with in NZ. I’ve been finding interesting articles about the body, the mind, slime mold and embryology…in these travels I found this post about the Green Man, which, since I am thinking of the cycles of generations, of death and rebirth, seems an appropriate symbol to summon.

Now, I have been vaguely obsessed with the Green Man for a very long time. We had a mysterious book, I can’t remember the exact title, but it was something about the Green Man, in our bookshelves, growing up. It had an old-fashioned binding and that old book smell–and whenever I went to the book shelf looking for a new book to read it would pop out at me teasing and tantilizing me. But whenever I fell for the temptation, it was so boring and had nothing to do with its exciting title, I always felt jaded. Perhaps I was too young to get it which made it even more intriguing to me–perhaps it was written in the Language of the Birds–I wish I could remember the name….

Perhaps that book is a good symbol for what the Green Man has represented to me in general–despite my repeated attempts to understand what this ancient symbol and archetype means, I have always been stumped just prior to the actual ‘ah ha’ moment, which leaves me feeling frustrated, wanting to know more, but also needing to put it aside. The Green Man has therefore crept around the corners and cracks of my consciousness, much like moss growing irrepressibly from the chinks in a cement wall–something that is always there, but generally never noticed.

This is what Andrew Cook writes about the Green Man, which has finally provided for me the insight I have been longing for and gives me a toehold on what the Green Man represents:

The Green Man is a powerful symbol of regeneration, death and rebirth, and the inevitable power of life to continue regardless of circumstances. The nature of the new green shoots springing from the face and orifices of the (dead?) male human head also give reference to the turning of the seasons, and the movement of life within the cycle of the year.

Some Green Man faces are fierce, and reflect the intensity with which life is taking them over. It is almost as if the struggle to live and love has become so intense that life itself has intervened and decided the necessary direction of growth, and the Green Man is left grimacing and raging as life carries him and grows through him in directions he is trying to pull away from. He is trying to be a man (ego), and life is growing through his eyes and mouth and nostrils, transforming him into what he is struggling against. Some of the Green Man faces are relaxed, and even smiling. Whether relaxed or in a rage, the shoots continue to grow, and he becomes part of the new life growing from his old self/body. 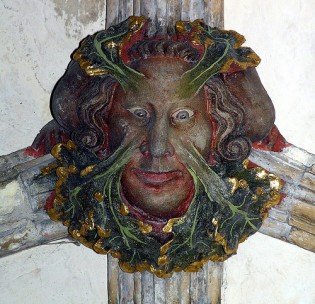 Everything that he was, now becomes the compost: the food which sustains everything he will become. The Anger and Grief feed his spirit, and with Laughter and Joy, Fear and Pain all become meaningful only as things which assist his growth. In the end, they all return to the Earth and surround his roots – for they are the history of his roots, his past. The spirit takes this, and performs alchemy, transforming base into fresh golden shoots which emerge into the light… And the roots feed and nourish that which he has become, providing a firm and solid foundation from which the seed can grow.

Meanwhile – his eyes do not look back at the soil, but remain fixed on the sunlit sky above. –Andrew Cook 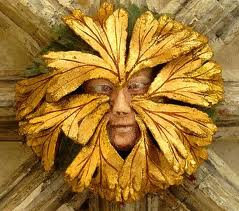 What and exciting and terrifying image! I can relate to this more strongly after being infested with a dangerous mold that took up residence in my digestive system living in NZ! Now, following the GAPS diet which focuses on growing the life supporting yeasts and bacteria in my gut and other mucous membranes–makes me understand the image of having the powerful force of nature growing from within. Nothing can stop it. This is just on the physical level, the levels that nature grows through us despite everything we do to sanitize it are legion.

A quick search of amazon.com just now to try to track down the book I mentioned earlier came up with a plethora of books about the Green Man, most of them quite recent just since the late 90s. The image of the Green Man is on the rise again. Now is the time the people who live in the cracks and around the edges of society are beginning to grow–the mossy people–the ones who can’t help but be how they are–despite trying as hard as they can to fit into what the general society would like them to be. These are the ones who can’t help but be what is growing within them, the wild, un-comprehensible, intuitive, creative, scary people with that strange fire in their eye–and now, those living the mainstream life are starting to feel their own bodies resonate with this ancient, irrepressible force as well.

It is almost as if the struggle to live and love has become so intense that life itself has intervened and decided the necessary direction of growth, and the Green man is left grimacing and raging as life carries him and grows through him in directions he is trying to pull away from.

I just love that passage. This is indeed what happens, we think we can control, regulate, restrict, but in the end we are left with the choice, to go with the flow of life or to insist on working against it, to our own terror, pain and ill-health, either way we will die, decompose and bring forth new life. This poem is also quoted from Andrew Cook’s site www.hummingbird-one.co.uk:

Let us without worrying about it,
let the destiny of the planet accomplish itself.
Our lamentations will not affect it,
and our ill-humour will be misplaced.

The Universe does not know discouragement,
it renews every task that has miscarried,
every check leaves it young, alert, and full of illusions.

The Green Man was often accompanied by a Green Cat in the ancient days. The cats were dressed up in leaves and vegetation for fertility festivals, they both may have also ended up sacrificed. Perhaps this is why the Green Man is found on crosses and represents Christ in old cathedrals. The sacrificial victim, scape-goat…I think of Merlin or Wodan when I see these images. Merlin is also meant to return at some point…perhaps that time is now, and he is returning in each of us as the Green Man…. 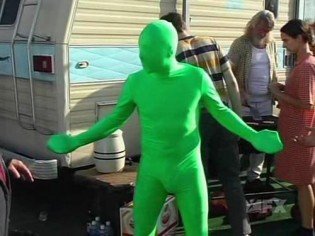 One last thought on the Green Man. The Green Man has recently taken on a new guise created in the TV show It’s Always Sunny in Philadelphia. The disgustingly lovable? character Charlie, not only loves dumpster diving, probably has all kinds of fungus growing on and in him and follows whatever passions his heart devises…but he also loves to wear a green spandex body suit and call himself the green man. Charlie’s particular breed of decrepit isn’t something I am recommending by mentioning this…just leaving you with some food for thought :)….

Click here to cancel reply.
« Warning From the Heart of the World
Yearning for our Other Half »