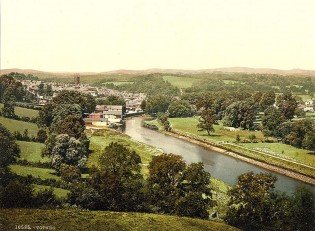 I think I discovered the Transition Town movement through reading Small is Beautiful, or maybe it was while I was living in New Zealand…I’m not sure. Vancouver, BC’s community site Village Vancouver is a really helpful resource, and has helped get the Underground Market in Vancouver going. Check out the site as there is also an alternative currency forming as well as a large bee community, backyard chickens…foraging…you name it. Check it out and get involved. I have also been following NZ’s TT movement from afar, check out this website to find out more about getting involved in New Zealand. The following article gives some interesting history and present day progress reports on the original Transition Town, Totnes in UK. Please read the full article here, as I have only pulled out a few of my favorite paragraphs.

Totnes: Britain’s town of the future by Lucy Siegle.

Totnes is an ancient market town on the mouth of the river Dart in Devon. It has the well- preserved shell of a motte-and-bailey castle, an Elizabethan butterwalk and a steep high street featuring many charming gift shops. All of which makes it catnip to tourists. A person might initially be lulled into the belief that this was somewhere with as much cultural punch as, say, Winchester.

But bubbling below the surface is a subversive hub of alternative living, a legacy of the radical goings-on from Dartington Hall, just down the road, where Dorothy and Leonard Elmhirst’s vision of a rural utopia gathered steam in the 1920s. Indeed, there are more new age “characters” than you can shake a rain stick at, more alternative-therapy practitioners per square inch than anywhere else in the UK and the town was once named “capital of new age chic” by Time magazine.

Rob Hopkins arrived in 2005 and let loose the Great Unleashing, aka the launch of Transition Town Totnes (TTT).

Six years on, the Transition initiative, which attempts to provide a blueprint for communities to enable them to make the change from a life dependent on oil to one that functions without, seems to me one of the most viable and sensible plans we have for modern society.

In search of a town big enough for the plan to have a wider effect, Hopkins moved back to Totnes, with its population of 23,000, with his wife Emma and their four children, and he worked on a version of the Energy Descent Action Plan with local resident Naresh Giangrande.

The Transition movement works on the basis that if we wait for government to act on issues such as climate change we’ll be waiting until hell freezes over; and if we only act as individuals, that’s too little. So it’s working together as communities where the real change will happen. In offices on that steep high street, squeezed between the pet shop and a travel agency, Transition Town Totnes was formed, swiftly followed by the Transition Network, to support the growth of the movement outside Totnes.

There are now more than 350 Transition movements, 200 of them in the UK. Last month the first Australian region, Sunshine Coast, became an official Transition Town. Hundreds more communities are mulling over the idea of embracing Transition (they are known as mullers).

Not everything has gone as swimmingly. A local currency is central to the Transition plan. “Think of a leaky bucket,” explains Brangwyn. “Any time we spend money with a business that’s got more links outside the community than in it, we leak money from the local economy. What local currency does is allow that wealth to bounce around in that bucket. We’ve barely touched the surface of systems that will benefit the local economy. We don’t just need our own pound note but a credit union, electronic means of transaction, a time bank.” And although you can detect a certain fondness for the Totnes pound note on the local high street, it hasn’t been as successful as Transition currency in Lewes, Brixton and Stroud. There’s still work to be done.

The great plan in Totnes included the planting of 186 hybrid nut trees around town. You can just walk around and help yourself to free nuts, which can only help community cohesion.

Click here to cancel reply.
« Wi-Fi in schools – an Invisible threat
Warning From the Heart of the World »
We use cookies to ensure that we give you the best experience on our website.
If you continue to use this site we will assume that you are happy with it.