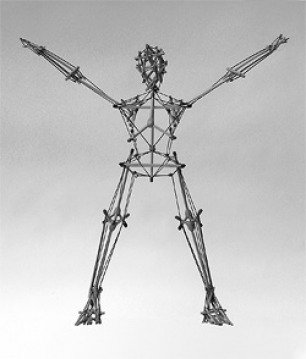 Since I am on the subject of connective tissue, I thought I better mention bio-tensegrity which is an important idea in the biodynamic mode of craniosacral therapy, and which is a concept I really like, plus I love the toys that have been made using this principal.

My sister, who is an emergency nurse, recently told me about an elderly gentleman they had show up in the emergency room during one of her shifts. I don’t remember exact details, but I will do my best. He was some kind of a marshal arts instructor and around 80 years old. Somehow he managed to fall out of a second story window onto the pavement below. He got up and was completely fine except for a burst ear-drum. No broken bones, in fact he had simply bounced. This seems like a great example of bio-tensegrity to me. I have pulled out some excerpts from Donald E. Ingber’s article The Architecture of Life below to give you a better idea of bio-tensegrity.

Tensegrity structures are mechanically stable not because of the strength of individual members but because of the way the entire structure distributes and balances mechanical stresses. The structures fall into two categories. Structures in one category, which includes the geodesic domes of Buckminster Fuller, are basically frameworks made up of rigid struts, each of which can bear tension or compression. The struts that make up the framework are connected into triangles, pentagons or hexagons, and each strut is oriented so as to constrain each joint to a fixed position, thereby assuring the stability of the whole structure. 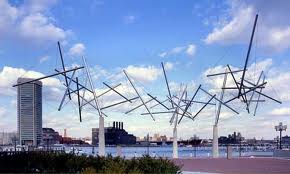 The other category of tensegrity structures encompasses those that stabilize themselves through a phenomenon known as prestress. This type of structure was first constructed by the sculptor Kenneth Snelson. In Snelson’s elegant sculptures, structural members that can bear only tension are distinct from those that bear compression. Even before one of these structures is subjected to an external force, all the structural members are already in tension or compression–that is, they are prestressed. Within the structure, the compression-bearing rigid struts stretch, or tense, the flexible, tension-bearing members, while those tension-bearing members compress the rigid struts. These counteracting forces, which equilibrate throughout the structure, are what enable it to stabilize itself.

Tensegrity structures of both categories share one critical feature, which is that tension is continuously transmitted across all structural members. In other words, an increase in tension in one of the members results in increased tension in members throughout the structure–even ones on the opposite side. This global increase in tension is balanced by an increase in compression within certain members spaced throughout the structure. In this way, the structure stabilizes itself through a mechanism that Fuller described as continuous tension and local compression. In contrast, most buildings derive their stability from continuous compression because of the force of gravity. 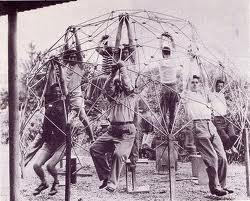 The tension-bearing members in these structures–whether Fuller’s domes or Snelson’s sculptures–map out the shortest paths between adjacent members (and are therefore, by definition, arranged geodesically). Tensional forces naturally transmit themselves over the shortest distance between two points, so the members of a tensegrity structure are precisely positioned to best withstand stress. For this reason, tensegrity structures offer a maximum amount of strength for a given amount of building material.

From Skeleton to Cytoskeleton

What does tensegrity have to do with the human body? The principles of tensegrity apply at essentially every detectable size scale in the body. At the macroscopic level, the 206 bones that constitute our skeleton are pulled up against the force of gravity and stabilized in a vertical form by the pull of tensile muscles, tendons and ligaments (similar to the cables in Snelson’s sculptures). In other words, in the complex tensegrity structure inside every one of us, bones are the compression struts, and muscles, tendons and ligaments are the tension-bearing members. At the other end of the scale, proteins and other key molecules in the body also stabilize themselves through the principles of tensegrity. My own interest lies in between these two extremes, at the cellular level. 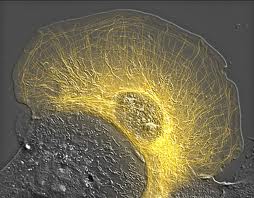 Inside the cell, a gossamer network of contractile micro-filaments–a key element of the cytoskeleton–extends through-out the cell, exerting tension. In other words, it pulls the cell’s membrane and all its internal constituents toward the nucleus at the core. Opposing this inward pull are two main types of compressive elements, one of which is outside the cell and the other inside. The component outside the cell is the extracellular matrix; the compressive “girders” inside the cell can be either microtubules or large bundles of cross-linked micro-filaments within the cytoskeleton. The third component of the cytoskeleton, the intermediate filaments, are the great integrators, connecting microtubules and contractile micro-filaments to one another as well as to the surface membrane and the cell’s nucleus. In addition, they act as guy wires, stiffening the central nucleus and securing it in place. Although the cytoskeleton is surrounded by membranes and penetrated by viscous fluid, it is this hard-wired network of molecular struts and cables that stabilizes cell shape.

The tensegrity model suggests that the structure of the cell’s cytoskeleton can be changed by altering the balance of physical forces transmitted across the cell surface. This finding is important because many of the enzymes and other substances that control protein synthesis, energy conversion and growth in the cell are physically immobilized on the cytoskeleton. For this reason, changing cytoskeletal geometry and mechanics could affect biochemical reactions and even alter the genes that are activated and thus the proteins that are made. 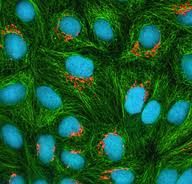 By simply modifying the shape of the cell, they could switch cells between different genetic programs. Cells that spread flat became more likely to divide, whereas round cells that were prevented from spreading activated a death program known as apoptosis. When cells were neither too extended nor too retracted, they neither divided nor died. Instead they differentiated themselves in a tissue-specific manner: capillary cells formed hollow capillary tubes; liver cells secreted proteins that the liver normally supplies to the blood; and so on.

Thus, mechanical restructuring of the cell and cytoskeleton apparently tells the cell what to do. Very flat cells, with their cytoskeletons stretched, sense that more cells are needed to cover the surrounding substrate–as in wound repair–and that cell division is needed. Rounding indicates that too many cells are competing for space on the matrix and that cells are proliferating too much; some must die to prevent tumor formation. In between these two extremes, normal tissue function is established and maintained. Understanding how this switching occurs could lead to new approaches to cancer therapy and tissue repair and perhaps even to the creation of artificial-tissue replacements.

The following video shows Peter Levine and Tom Flemons discussing tensegrity. They also demonstrate with some of the toys. It is great how easily a bunch of the toys fit together and function as a whole.