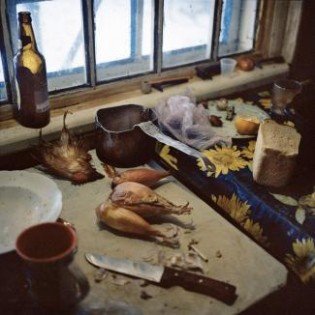 Incredible article of the spirit and warmth of hearth and soul. I highly recommend reading the full article here.

Twenty-five years after the world’s worst nuclear accident, More visits a hardy community of women who’ve made a home in Chernobyl’s desolate, radioactive surroundings. Why they chose to live here after the disaster, defying the authorities and endangering their health, is an inspiring tale—about the pull of ancestral lands, the healing power of shaping one’s destiny and the subjective nature of risk. Click here for a photo gallery.

Outside Hanna Zavorotnya’s cottage in Chernobyl’s dead zone, a hulking, severed sow’s head bleeds into the snow, its gargantuan snout pointing to the sky in strange, smug defeat.

The frigid December air feels charged with excitement as Hanna, 78, zips between the outlying sheds wielding the seven-inch silver blade that she used to bring the pig to its end. “Today I command the parade,” she says, grinning as she passes a vat of steaming entrails to her sister-in-law at the smokehouse, then moves off again. In one hand she holds a fresh, fist-size hunk of raw pig fat—there is no greater delicacy in Ukraine—and she pauses now and then to dole out thin slices to her neighbors. “I fly like a falcon!” says Hanna, shuttling at high speed back toward the carcass. Indeed, falcons—as well as wolves, wild boar, moose and some species not seen in these environs for decades—are thriving in the forests and villages around Chernobyl. One particular falcon, however, has not fared so well. A large gray and white specimen, it is strung up, dead, chest puffed and wings outspread against the slate sky, above Hanna’s chicken coop as a warning to its brethren. “He came and ate my chicken, so I beat him with a stick,” she says. But if this falcon has not survived, Hanna and her neighbors have—against all odds and any reasonable medical prediction.

“People who left have a lot of problems. When you live outside your village, you leave your soul,” says Galina Konyushok, 71. After the accident, she helped collect and transport contaminated wheat out of Chernobyl to feed the cleanup workers; now she has thyroid cancer. Her exquisite needlework, seen here, employs traditional folk patterns and images of Jesus Christ. The biblical verse in the frame reads, “I give you a new command: Love one another.” Photograph: Rena Effendi

Twenty-five years ago this month, on April 26, 1986, the Chernobyl Nuclear Power Plant’s Reactor No. 4 blew up after a routine test, and the resulting fire lasted 10 days, spewing 400 times as much radiation as the bomb dropped on Hiroshima. The government (then Soviet) declared the surrounding 30 square kilometers uninhabitable and immediately resettled 116,000 residents with a pension, an apartment and sketchy information about the health risks that lay ahead. In the ensuing months and years, these first resettlers were followed by a few hundred thousand more, all displaced, most from the land where they’d grownup. But Hanna, who had been forced out in the first group, did not accept that fate. Three months after being relocated, she returned with her husband, her mother-in-law and a handful of other members of their collective farm, the main building of which now lies like a carcass, silent and overgrown, its sunken roof collapsing, a half-mile down the road from Hanna’shouse. When government officials objected, she responded, “Shoot us and dig the grave; otherwise we’re staying.” (READ MORE)

Click here to cancel reply.
« Tutorial: How to Post to Hella Delicious
Nations of the Earth Slow Down »
We use cookies to ensure that we give you the best experience on our website.
If you continue to use this site we will assume that you are happy with it.