Street Food is Making a Comeback 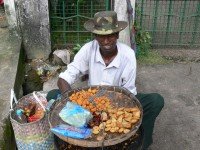 It is interesting to see over the past decade or so, as countries such as India and Thailand are putting more and more pressure on their street vendors to shut them down, that illegal street vendors are springing up all over North America — San Francisco, New York, Washington D.C., Los Angeles…the small guy is back. All over the world, sometimes this is the only way a family can make a dollar.

Last year in Los Angeles there was a crack down on street vendors, supposedly people were worried about the health safety of the vendors, but it may have been motivated more by racism. These days it is clear we need to be more concerned about food coming from the industrial-agriculture food sector, and not waste resources hassling street vendors. Most small-scale street vendors are very conscious of where their food is coming from and how they process it, they often know their customers in fact, their personal livelihood depends on their repeat business. They also take pride in their creation. Some of the new movement of pavement culinary artists may have even wild-harvested their ingredients!

There are concerns that should be met here, definitely, but if you follow the basic rules of street food safety eating–know your vendor, get things fresh and get them hot–and teach these to your kids as well as doing whatever you can to keep your intestinal bacteria powerful (eating raw garlic with your food is one way) I personally don’t think you would be any worse off eating from a street vendor than you would at a restaurant. I have worked in all types of food service facilities from airline catering to restaurants and to be honest I don’t trust any of them any more, in fact, I would be more inclined to trust a street vendor where I could see what was being done to my food! But I would love to know how you feel about this issue so please take a minute to vote in the street food poll in the right hand column 🙂

I was inspired to write this post after hearing about thepizzahacker, who is a friend of my man. He has developed a portable pizza oven called the FrankenWeber, he uses this oven in parks around San Francisco to make illegal pizza in the streets from home-made sourdough, home-grown tomatoes, nettles, mozzarella — many other fantastic toppings are also to be had. There is an interview with him here which tells how he developed his oven which he sells too, by the way on his website www.thepizzahacker.com. If you are in San Francisco and want to have some of his pizza follow him on twitter @pizzahacker and let me know how you like it! I want some! What an amazing guy!

Last year Toronto started allowing ethnic street vendors, instead of just hot-dogs. Some of the start-up costs for these vendors:

In the meantime San Francisco is digging their new formal and informal additions to the ‘pavement cuisine’ culture that has emerged there. Read the article here.

Please let us know if you think street hawkers should be allowed back into our cities by voting in the poll or leaving a comment, thanks 🙂