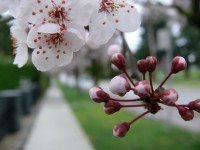 I have been wanting to go to Seedy Saturday for the past couple years, but somehow missed it each time. This year I was determined to get there, and so I rushed off after my last day of work. It was a sad morning as we got news of the earthquake in Chile and three of the ladies in the kitchen are from Chile. The hardest part for these ladies as they tried to take their mind off their families, was not knowing if they were alive as it was impossible to get communications through.

I got to Seedy Saturday shortly before it closed up, call me naive or just idealistic, but I had gotten the idea that Seedy Saturday was gonna be a bunch of people exchanging seeds for free, so I just assumed that the donation I was expected to give at the door would cover my costs and I gave generously. So generously I didn’t have any money left when I got in the building and realised that there really wasn’t much of an exchange going, and it was actually just a seed sale. I guess if I hadn’t come with this assumption I might have been more impressed. Fortunately I did discover a forum where seeds can be freely exchanged at the Environmental Youth Alliance booth, which also had some really cool stickers. The aforementioned forum is the Vancouver Plant and Seed Exchange Network. 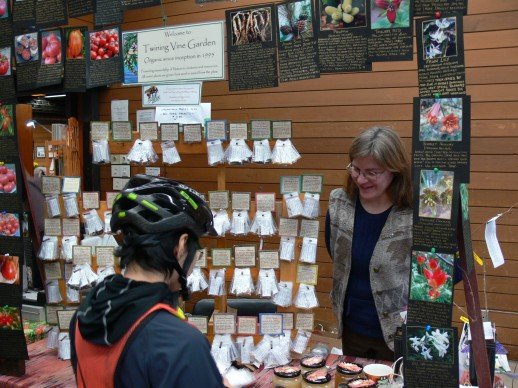 There was a wide variety of heirloom and traditional seeds available, but my favorite seed vendor by far was Sandra from the Twining Vine Garden. Her seeds and plants were priced surprisingly reasonably. I was amazed to see my first American Chestnut seedling, I had heard that they had largely died from blight years ago, but I guess there are still survivors on the West Coast. I really wanted to buy it but have nowhere currently to plant it. I was amazed to find the price was only $8.00. Sandra told me that there are lovely groves of American Chestnuts to be found in various areas of British Columbia. I spent the last couple of dollars I had left very wisely on a $2.00 packet of sprouted American Ginsing seeds which she said grow well in a container and some Sookum Grow germination initiator. I went home that night and tried it out, my seeds are now growing vigorously! 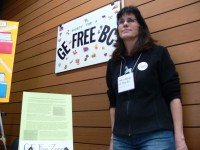 A couple of the other stands I enjoyed was Barefoot Books which had some really wonderful children’s books about growing and gardening, the Bokashi composting (I haven’t done so well with worms yet, but I think I will give it one more shot before giving up entirely). But my favorite by far was the Society for a GE Free BC. I had a chance to speak with April Reeves about the state of our world and her passion and extensive knowledge on the topic was inspiring. I will have to put up some more of the information she gave me on the topic in another post as there is a lot of info. She has started up a meetup group for Anti-GMO Activists in Vancouver and is working to create a GE Free BC, please join the group, more and more plant species are becoming destructively altered by their interaction with GE seeds. Wheat is a big concern as it is in the huge grass family. Alfalfa is a recent concern and GE sugar beets are already in the ground in Canada. These are just a few examples. In the meantime I will leave you with these facts and this video challenge for BC to go GE Free…

About 45% of corn and 85% of soybeans in North America are now GE. About 75% of processed foods on supermarket shelves contain GE ingredients.

Click here to cancel reply.
« Ubuntu = No More Student Debt?
Methods of Detoxification »
We use cookies to ensure that we give you the best experience on our website.
If you continue to use this site we will assume that you are happy with it.