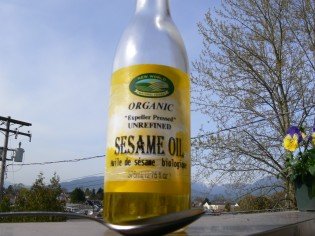 I first read of this unusual healing technique in Moon Time: The Art of Harmony with Nature and Lunar Cycles

by Johanna Paungger and Thomas Poppe when I first moved to New Zealand. At that time for some reason I couldn’t get my hands on cold-pressed sunflower or sesame oil and didn’t get a chance to try it. I started hearing about this method again last year and we tried it out with great results. It seems that Oil Pulling (OP) is also used in Ayurvedic healing which goes back at least 5,000 years, so the roots of this old European version are indeed ancient. It is helpful for removing heavy metals from the body, and people have used it for nasal congestion, eczema and various other issues. Both sunflower and sesame oil are very rich in antioxidants and are the best oils to use, I know other places say other oils are just as good, but I highly recommend using only sunflower or sesame. The following method of oil pulling is taken from the book Moon Time and describes in detail how to practise this ancient healing technique.

An old and effective method for the detoxification and strengthening of the whole body and at the same time decontaminating the teeth is known as an oil mouthwash. Each step of the method is important and should be adhered to closely in order to achieve the desired effect. This is how it works:

Last month, we decided to do this and were astonished with the results. We had been getting incredibly bad breath (like a dead corpse–yuck!) from the first few stages of the GAPS diet that we recently started, after a couple days of doing this oil pulling (we used sesame oil this time which is often used in the Ayurvedic method of this cure) we weren’t having that trouble anymore. It is a very strange method of detoxification but it also is said to clean and strengthen your teeth better than commercial teeth whitening. We followed Johanna’s advice to the T–including the slurping and following the moon phases. Many traditions seem to agree that methods of detoxification work much more powerfully when the moon is waning, and that building up the body is best done when the moon is waxing, it is also quite nice to be in a routine that follows the waxing and waning of the moon.

This website, with a lot of great information on Oil Pulling and first hand accounts from a wide variety of people, is a really handy resource if you are interested in knowing more about how this method actually works. Some people seem to think it is the omega-3 fatty acids and whatnot that are being absorbed into your system, others feel that it is pulling radiation out from your teeth. There are some really interesting accounts here and you can also add your own personal experiences.

I am always eager to hear first hand healing experiences so please take a minute to share your experiences and which oil you prefer. It seems that cold-pressed sunflower and sesame oil are the most commonly used (they are probably in a relatively good price range too-as pumpkin seed oil or avocado oil are often very pricey.) For more information please follow this link.

Update:
I have been using this technique now for over a year. I have found that it does help with removing radiation from EMFs and other things from your body, as well as being a good way to absorb the antioxidants that are in both of sesame and sunflower oils. When oil pulling my throat often becomes quite dry and when it is particularly bad I cannot keep the oil in my mouth for a full 15 minutes. The mucous membranes of my throat and lungs are being cleaned out and I generally have a chunk of mucous to spit out immediately following the oil pulling. Often I find that this chunk is dirty so I feel that my lungs are also being cleansed.

I have been thinking about all of this and looking into radiation and electromagnetic frequencies a lot lately. As we all know our teeth are mostly made of calcium which also conducts electricity. The other day I spent much more time sitting with my face very close to my monitor as I was doing extensive research. The next morning my teeth hurt and felt quite sensitive. I immediately did an oil pulling with sunflower oil when I got up, afterwards my teeth felt much better as did the rest of my head.

It is interesting to consider that the powerful antioxidants in both the sunflower and sesame oils when swished around the teeth are pulling the radiation out of the teeth. As we also know the mouth also absorbs various tinctures and homeopathics through the thin layer of skin, and is quite an effective for transdermal medicine treatments when you don’t want the treatment to be destroyed by the digestive process. Absorbing the high amounts of vitamin E and other antioxidants in these oils through your mouth is fast and quite effective.

The following is from another great site with some really good information on oil pulling: www.whale.to

Through this method it is possible to heal individual cells, cell conglomerates such as lymph nodes and more complex tissues such as internal organs simultaneously. This occurs because the beneficial microflora throughout the body are provided with a healthy continuum. Without this natural bodily intrusive element evinced by the microflora the usual pattern of human health tends to lean towards illness rather than wellness. Dr. Karach anticipates that regular application of this treatment by reversing this process so that wellness is the dominant state of the human body is likely to increase the average human lifespan to approximately 150 years, double the present life expectancy.

Dr. Karach is supported in this view by other colleagues in the world.

By means of this treatment {Oil } it is invariably the result that diseases like migraine headaches, bronchitis, diseased teeth, arterio thrombosis, chronic blood disorders such as leukemia, arthritis and related illnesses, neuro physiological paralysis, eczema, gastro enteritis, peritonitis, heart disease, kidney disease, meningitis, and women’s hormonal disorders are completely eliminated from the organism. The benefit of Dr. Karach’s method is that the oil therapy heals the whole body in perpetuity. In terminal diseases such as cancer, Aids and chronic infections this treatment method has been shown to successfully replace all others. Dr. Karach has successfully healed a chronic leukemia patient with 15 years of harsh treatment methods behind him. Acute arthritis in 1 patient who was totally bedridden was removed from his body in 3 days with no inflammation apparent.

Click here to cancel reply.
« Bentonite Clay
April Health Horoscope »
We use cookies to ensure that we give you the best experience on our website.
If you continue to use this site we will assume that you are happy with it.