Fire in the Fennel Stalk 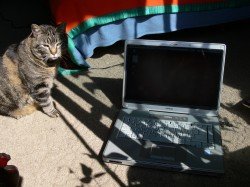 When I first heard of open-source I couldn’t believe my ears, the whole concept thrills me to bits. It is very timely, and similar to the myth of Prometheus when he stole fire from the gods, and brought it down for mankind in a fennel stalk. This time the tool of assistance for humanity is something that has been co-created through cooperation and free will. When I first heard about using Linux it was 2006 and I was still using my mom’s old notebook made in the 1980s. It was a real dinosaur, but at least it was still working and portable. I had about 4 batteries for it, but none of them held a charge and finally they all gave out.

I did a bit better this time round. My mom gave me her old computer again this year. I was really in luck, because she had just gotten it a couple years ago in S. E. Asia, all the software was pirated and it soon crashed. It was a perfect candidate for the new Ubuntu 9.0.4 that had just been released and suddenly I was back in business with the flashiest computer I have had since I got my PowerBook 165c in 1993.

I started using Ubuntu the beginning of last year and I ended up installing it on 2 computers about three times. I am maybe overly comfortable with computers since I have been around them most of my life, I was even a computer consultant way back in 1992. But that was a long time ago in computer years and I don’t have much of a clue about what I am doing these days, so I kept having problems. Therefore, it was good to have my computer expert guy around to get me through some frustrating moments last year, when I totally had no idea what I was trying to do or how to do it.

The latest release of Ubuntu, seems to have solved all kinds of problems and has made it very easy to use for even someone like me who is just your average computer user. I installed it with no troubles and added all of my favorite applications, in fact I find it easier to use than Microsoft because it has a very similar layout to the old apple computers and is very user-friendly. Other open-source programs that I like, such as digikam, have also been improved. With all these updates and improvements I am sure anyone could use Ubuntu now. There are also Ubuntu communities springing up in every city where you can share, learn and help each other in how best to use this incredibly handy and FREE tool. The other great thing about open source software is that you can generally find out anything you need to know by just searching for it. 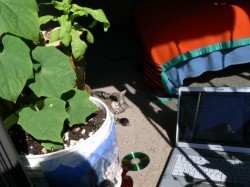 The other thing I really love about open source is that they are interactive systems, they need your feedback and will adjust to the needs of the people using it. If you have a bug or a problem or if you need something else, you can let someone know, or you can trust that it is probably already being worked on and will most likely be fixed in the next update. It is a model of what we should be basing our society on. The biggest problems we are seeing in all of our industries, schools, institutions on every level seems to be because we are so penalized for making mistakes and everything flows one way so there isn’t room for flow and adjustment to changing circumstances.

In this way the focus is taken off of the end product and is put on the continuing process and on cooperation and supporting each other. Open source and Ubuntu as one aspect of this movement is absolutely revolutionary. It is spreading like wildfire. I still have a lot to learn about it and I am fortunate to be living in Vancouver, BC because there is a real community around helping each other using Ubuntu, please check out this meetup group to get more details about the Vancouver group.