This is a practical post outlining several things you can do to stop supporting Monsanto and their cronies who have foisted genetically modified organisms on us. I though it was a helpful post–it gives a good list of numbers to call. Thanks to Myra Said It–please read the full article there.

There is power in the dollar & power in numbers!

How many of these things can you do?

I discovered this group, Nourishing the Planet while checking out some links over at The Bovine. When I saw this video I felt really touched and hopeful. A cow or goat can really make a difference to a family, whether it is here in Vancouver or over in Africa. This is a very basic and ancient re ...

The Vancouver march will begin on Monday, February 14 at 1 p.m. at Main and Hastings, and will continue past the police station and end at Oppenheimer Park. Vancouver march for missing and murdered women to mark 20th year By Yolande Cole, February 11, 2011 What began 20 years ago as a smal ...

It was announced last summer that total student loan debt, at $830 billion, now exceeds total US credit card debt! What about organizing a collective action to withhold loan payment for one month to send a message to the banks? I recently read the book The Student Loan Scam: The Most Oppresiv ...

Egypt – All Lines are Nines

I did an I Ching reading recently, and to my surprise I got Ch'ien (The Creative) in which all lines are solid. Solid lines are either numbered 7 (Young Yang) or 9 (Old Yang). (See how to count yarrow stalks). When I read the special section about what it means when all lines are nines--it made me t ... 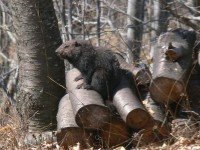 Happy New Year! Welcome to the year of the Rabbit and happy Groundhog Day! Winter is nearly over! We had great fun when we lived in upstate New York, we had a few groundhogs as our neighbors - they just loved eating up my garden. Gary the groundhog gives you a look into his daily activities as he ...

In 2003 when I first started writing for Healthy Options magazine in New Zealand I did a three day fast and spent a couple days at the Auckland library (some people do prayer and fasting, I do reading and fasting-heh). Now those of you who do fasts know that it is a good way to clear your mind and g ...

I'm really behind in posting as we haven't been feeling too well. We spent the first 10 days of 2011 purging in the most visceral of ways--right when I was planning a whole bunch of cool posts. As a result I am feeling quite frustrated. I thought I was gonna be on top of things this year--instead I ...

Hey all, hope you have had a great holiday season, managed not to eat too much crap and got in plenty of socializing. We made it through without too much disruption to our GAPS diet. It isn't easy to maintain your dietary guidelines under such exuberant hospitality that often occurs in these circums ...