Sense of Adventure in Man and Bee Influenced by Neurotransmitters 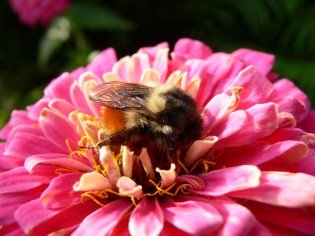 To Boldly Go Where No Bee Has Gone

Just like humans have astronauts and mountain climbers, honeybee societies have their own brave explorers: scouts, the bees that venture out to find new food sources. A new study examines scouts’ brains and finds that novelty-seeking in humans and bees seems to be based on some of the same genes.

In honeybee societies, scouts are the bold pioneers. “Most foragers wait to be told what to do, but not scouts,” says Gene Robinson, an entomologist and geneticist at the University of Illinois, Urbana-Champaign. “Scouts go out and search for food on their own.” When a scout, which is always female in bees, finds food, she flies back to the colony, reports to her compatriots with the famous waggle dance, then flies off again, ignoring her new discovery to look somewhere else. Robinson and graduate student Zhengzheng Liang suspected that it might be possible to make comparisons between this behavior and novelty-seeking in humans and other vertebrates, which has been well studied.

The researchers came up with a new way to identify scouts within a colony. Liang, who did the field and lab work for the study with the help of undergraduates, put a hive in an outdoor enclosure with mesh walls. The bees in the hive were given a few days to get used to eating from a jar of sugar water with a yellow flower pattern and a faint scent. Then on three consecutive days, Liang put out one alternative food source: a jar with a different color and scent, somewhere else in the enclosure. Scouts were defined as bees that visited at least two new jars, and when they did, the students placed a dab of paint on each bee’s thorax indicating which jar it had visited. “When they are being fed, it’s like little cats are drinking milk,” Liang says. “They don’t mind you putting the dot on them.” When those bees were later captured, Liang used a microscope to remove the scouts’ rice-grain-sized brains. Then she measured the pattern of gene activity in the brains of scouts and non-scouting bees. About 16% of the honeybee’s 7500 genes showed a significant difference in activity between the two groups of bees. That included several genes linked to novelty-seeking in vertebrates, such as receptors for the neurotransmitters dopamine and glutamate.

Finally, Liang and her colleagues gave non-scouting bees sugar water laced with neurochemicals that activate some of those receptors. Bees that ate glutamate were more likely to fly out in search of food when a hive was moved to a new location. Adding a glutamate inhibitor at the same time prevented that effect. Bees that were fed chemicals that block dopamine receptors were also more likely to scout, the team reports this week in Science.

That means that some of the same genes are involved in novelty-seeking in people and bees. Humans and honeybees aren’t close relatives; their common ancestor was probably some kind of marine flatworm, Robinson says. There’s basically zero chance that this common ancestor had scouts. “Our results raise the interesting possibility that there’s a genetic toolkit for this kind of behavior,” he says—a set of genes that have been used at several points in evolution to come up with similar behaviors.

“What this paper is showing very nicely is that you’ve got clearly a group of bees here who are interested in novelty in some form,” says Jeremy Niven, a neuroscientist at the University of Sussex in the United Kingdom who studies insects. Niven particularly admires the researchers’ method for finding scouts, because it makes no assumptions about what scouts might behave like, but only finds animals that go to new places. He is more cautious about the conclusions on how chemicals influence the bees’ behavior, however. For example, feeding a bee glutamate could be having effects on muscles all over its body, not just in the brain. “In the context of other things they’ve done it’s very strong evidence, but it’s not definitive by itself.”