A Shan Romeo and Juliet Story 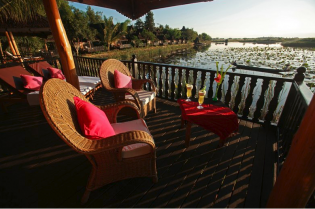 Back in 1999, after studying at the Culinary Institute of America in Hyde Park New York, I was highly disillusioned with the US — the greedy consumer mentality and the increasing amounts of GMOs in the food (which everyone thought I was nuts for being concerned about at the time!) so I fled to Myanmar (Burma). While traveling around the country I stopped in at a beautiful teak resort on the banks of the mystical Inle Lake in Shan State. The owner of Inle Princess Resort somehow discovered I was trained in the culinary arts and invited me to teach the kitchen staff the art of baking breads, desserts and pastries for the guests of his hotel. I jumped at the chance and soon found myself getting to know a lively and eager to learn staff.

It was a very interesting experience. The owner proudly showed me the large oil-barrel, wood-fired oven that he had installed into one wall of the kitchen. I was determined to become an expert at getting the fire under that oven going. But after my first couple attempts, when all I managed to produce was a thick black smoke which sent all of the staff, myself included, on a desperate dash out the kitchen door, one of the kitchen staff learned to keep a sharp eye on me and whenever I started to look like I was gonna start the fire, he quickly stepped in and got it going before I had a chance. Many of the kitchen staff spoke quite good English, but this young wiry man didn’t, so although we got along very well and I really appreciated his gentle humor despite his tough appearance, I never knew much about his life.

After I’d been at the hotel for several months the young man disappeared. On one of her rounds the General Manager was down in the kitchen and I was wondering where he’d gotten to as the kitchen staff were once again being driven crazy by my (slightly improved) attempts to get the oven hot. I was quite unprepared for my simple question to be answered with an amazing tale — a Shan Romeo and Juliet story that just ripped your heart out: 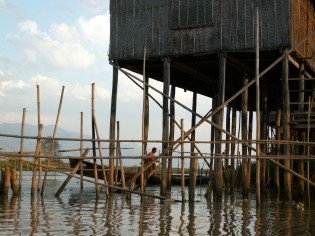 The young man was an ethnic Intha who had lived on Inle Lake for hundreds of years. He lived in a village on stilts in the middle of the lake. His family made Shan tofu, which is unique to Shan State and is made from channa dhal (which is something between a yellow split pea and chickpeas). There were two families in the village who made this delicious Channa Dhal Tofu and they hated each other. Their houses were right across from each other, on either side of the narrow strip of water that served as the main route through the village. Traditionally these families had a long-standing feud which as usual, no one could remember the reason for anymore.

As in Romeo and Juliet, the young man fell in love with the daughter of the hated family and they found ways to sneak off together and enjoy each other’s company. Unfortunately, things weren’t all peaches between the two of them and at some stage their relationship started to go wrong. The story I heard was that the young girl liked to play with the young men’s hearts and soon was up to her old tricks again, I am not sure the details of what happened but in an attempt to make him jealous she started hanging around with another young fellow and broke his heart as well as hers turning her quite bitter against him. She managed to get pregnant with this other fellow, but her family blamed the young man, causing quite an uproar between the two families. Her family then took the case to court, and the young man was convicted and sent to 3 years hard labor at the local prison in Shan State. 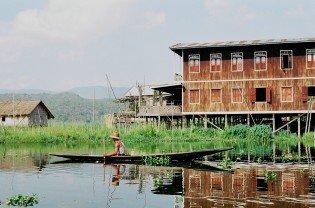 Of course I never heard her side of the story so who knows what actually happened, but either way, sitting here in Canada writing up this story, it is amazing to me that a young man went to jail for getting a young woman pregnant. That never happens! Usually the young woman is blamed and has to deal with raising the kid herself, and in Burma this is also often the case. It is true that in Shan state the women in general have more respect than in many places, they are also often the ones who run the businesses and are very sharp with money. But even so just the fact that this gentle, kind fellow was sent to jail for three years hard labor (which is extra tough in Burma!), does seem to prove the tale I was told about the vindictiveness of her family and their determination to ruin their competition and destroy their reputation.

A few months later I left my position there and went to work at a hotel in Yangon, but this poignant and romantic tale of two families on a beautiful, mystical lake always stuck with me.

The bright yellow channa dhal tofu is a very special dish, these particular beans are easier to digest than chick-peas although they look rather similar and the unique yellow tofu that is made from them is widely used in many Shan dishes. If it is made into a softer consistency more like a porridge it is called Tofu Nwe (warm tofu) and used as a sauce on the delicious Shan Noodles. The firmer version is cut into long strips and made into a Tofu Thoke (tofu salad) and triangle wedges are cut and deep fried to create tasty chips that are dipped into a sauce made from the softer tofu, cilantro, chilis and lime juice. Delicious and nutritious! Recipe with traditional preparation video here.

Click here to cancel reply.
« She Takes Back Her Body // We Take Back the Earth
25 Dead After Being Run Down in Cairo »