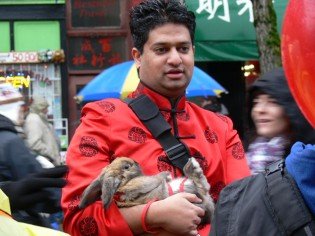 Gong Xi Fa Chi! Welcome to the Year of the Rabbit.

With February’s dark moon comes the year of the rabbit, and we say good bye to the year of the tiger (which is also my year). So what does the rabbit symbolize? I confess, I immediately think fertility and think of millions of rabbits bouncing around green meadows, I even get a little hungry. But perhaps I am not the person to ask–here’s a quote from the Medicine card book about rabbit:

Rabbit medicine people are so afraid of tragedy, illness, disaster, and “being taken,” that they call those very fears to them to teach them lessons. The keynote here is: what you resist will persist! What you fear most is what you will become.

During Chinese New Year, the people pay respect to their ancestors and in keeping with this tradition I am sharing a message from my own ancestor, about her experiences while doing Christian missionary work in China in 1937. As far as I can tell her trip was from Swatow (Shantou) to perhaps Hangpu (‘Hopo’).

Westward Bound — From Swatow, ninety miles inland to Hopo, in the heart of Hakka land, situated in western Kwangtung province.

Chinese New Year’s season is a time when all China is on the move, visiting and returning to ancestral homes. Four of us ladies decided to travel, also, we planned a visit, by launch and river boat, to Hopo. We had been invited to visit Rev. and Mrs. Adams, who, for over thirty years have been missionaries in a district of 250,000 people. This population includes those living in many villages, located within a radius of ten miles, beautifully situated in a wide river valley.

With sixteen large pieces of baggage and two men servants we left the launch for a four hour’s trip to Kityang, where we met the river boat which we had hired. (The boat cost seven dollars gold for the round trip for our croud.) At Kityang we were supplied with two hair mattresses from our mission hospital. These we put on the floor of the stomach of the boat, a deep section about six by eight feet. The boat was about eight by thirty-five feet and divided into eight small sections, the stomach being the largest. A semi-circular bamboo covering protected us during the day, and another was pulled over at night. 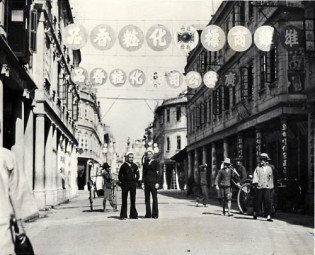 Our life on the boat, from Wednesday night till noon on Saturday, was extremely fascinating. We were surprisingly comfortable, with steamer rugs, blankets, comforters and warm clothing. The servants cooked on a charcoal stove in a section in the stern of the boat. A suitcase became an improvised table with blankets and cushions in liew of chairs. Our food, which we had taken with us, was similar to what we have in Swatow. The boys also brought fruit and vegetables in villages as we passed thru. We slept four in a row, packed in like sardines, with just room enough to turn.

It was interesting to watch the two boatmen, as the either rowed, poled, pushed or pulled the boat for the entire fifty miles. One of the party suggested that our boat was really a “Pullman” conveyance. We named it our “Twentieth Century Streamlined Limited”. Our boatman supplied us with rice and charcoal, so the Chinese would say, “We ate the boatman”. We afterwards “mended him”, — gave him a tip.

The scenery was really indescribable. Along the stream were graceful bamboo groves thrity feet high. These had been planted in rows, and, as they bent toward each other we had beautiful vistas of green cathedral arches. Behind the bamboos were fields and villages, with mountains in the distance. We passed women washing clothes, vegetables and furniture in the stream and saw water buffalo grazing or drinking, cormorants, snipe, white herons and kingfishers diving for fish. Now and then we disembarked and strolled through villages and along the banks, waiting for our boatmen to catch up with us at the end of our walk. At one village we passed a new, ornately decorated shrine on the side of which was painted, in English, “Deliged” and “Good Woring”, so we knew we were welcome. 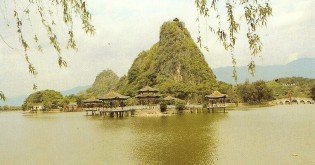 On the trip we amused ourselves by telling jokes, reading, playing games and loafing. The weather during the day was delightfully warm, getting much cooler at night, with rain, which really did not disturb us, during the last night.

At two pm of the last day two of the party decided to take a servant and walk the remaining distance–three po (about nine miles) according to the boatman. They found, however, at the end of the trip, at 6 pm, that they had walked twelve miles. The next morning, the rest of the party decided to walk in to Hopo, “just over the brow of the hill”, as the boatman said. They struggled on, around brows of many hills and bamboo groves and across bridges, and found, on reaching the Adama house, that they had walked three miles. They then inferred that the boatman had wanted to lighten his load, for which they did not blame him.

Upon arriving at Hopo we found a warm welcome awaiting us from Mr. and Mrs. Adams. Their home is situated almost in the center of a beautiful valley winding up to grazing fields for goats and buffaloes, short cuts to villages on the other sides of the mountains, roads to shrines and temples or narrow paths to ancestral graves. The graves in China are often placed high and must face water to conform to the superstition of feng shui. We saw many large earthen jars, placed in recesses in the hills and were told that these were bones of ancestors, dug from graves, for various reasons. The land was needed for fields, or roads, those who had come from distant parts wished to have their ancestors’ remains near their new home. The foreigners call these jars with their contents, “potted ancestors”, a rather uncouth, but very expressive term. 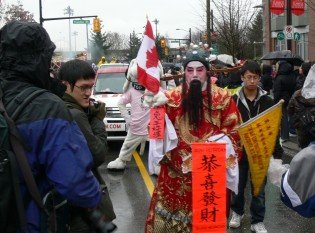 As the New Year was approaching the market center was crowded with purchasers of food, firecrackers, incense sticks, clothing, beautifully decorated children’s hats, etc. Everything must be spick and span at this time. Near the Adams’ house was a pond from which water was being pumped by a peculiar kind of treadmill. When the pond was dry people waded in and caught the fish to take to market. This water system is used extensively for irrigation purposes, also.

During our stay we tramped to temples and pagodas. We took our lunch one day and went to a small monastery in the hills. Here we had a marvelous view of the villages, terraces and mountain in the distance. Three of the party climbed to the top of the hill and had a fine view of the valley, with numerous villages, on the other side. At the monastery the caretaker heated water for our tea, which we “mended” him for, as usual.

Everything was quiet on New Year’s Day excepting for the shooting of firecrackers, which is done wholesale, by the pack or string. The next day we visited the market-place and witnessed a celebration in honor of an idol which had been brought from one of the temples. Food,–chickens, were carried on trays and presented to the idol. Incense was burned and respects paid and the food then carried home by the donor and the food eaten. Children, dressed in gay apparel, with peculiar hats, decorated with embroidery and pompoms, were also presented to the idols. In the evening the idol was carried around and through a big bonfire on the beach and was then taken to houses and business places, so that benefit might be derived thereby. Great crowds witnessed these celebrations. Bamboo poles, twenty feet high, shorn of leaves excepting for a tuft at the top, were strung from top to bottom with firecrackers which were set off at this festival. 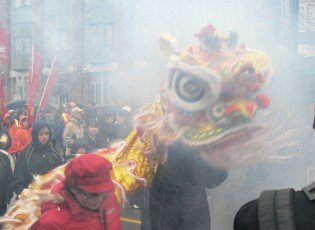 At this time of year for many days, strolling bands of entertainers, young men with immense, fierce looking, highly decorated lions and tigers’ heads, go around from village to village. Some of these men are actors, acrobats, or magicians. Some carry small stages and give puppet shows. A village will often hire a troupe to stay a week.

One trip of special interest in Hopo was to a new home of a wealthy family which had moved from their village on account of over-crowded conditions. Four brothers with their families and descendants, seventy apartments around a large central court, all inside the big outside wall. Each person had his or her allotted work. The house was decorated on the roof and eaves with symbols of the five elements–fire, gold, air, wood and water. The house cost $17,000 or about $5,000 US.

This inland section has been rich in curios. We bought pieces of bronze–two dating from the Sun Dynasty 900 to 1100 AD and one of early Han Dynasty, 200 BC 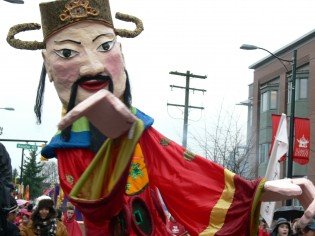 We must not leave Hopo without a word regarding the splendid mission work carried on by Mr. and Mrs. Adams. There are fine schools,–the boys numbering 200 students and the girls 130, a splendid hospital with a well-trained native Christian doctor, a well-established church and out stations in the surrounding villages. The hospital was built and is supported by the local gentry but they have placed it under mission control. The doctor’s salary is paid by our Board. On New Year’s DAy at the church service, in spite of the fact that people were celebrating at home, the church was full. Each of us made a short speech in English which was translated into the Hakka dialect by Mr. Adams. Evangelistic bands were ready to start out after the New Year’s season to hold services in surrounding villages. Surely work such as has been and is being carried on in this section of China is real, vital pioneer work for Christ.

The third day of the New Year is called in that district, “The Day of the Rat”, as the rat is supposed to take a bride on that day. It is considered ill luck to travel abroad during the day, but our boatman was not superstitious so we left at 9:30 am. We saw no signs of village activity along the way till 4pm when river boats, which had previously been loaded with charcoal (soaked in the river to make it weigh more), sugar, crackers, oranges, or wood, began to start, one after the other. Each boat had two oranges placed in a conspicuous place of the stern of the boat–as a good luck symbol. Our boat was no exception.

Our return trip took only thirty hours as we had the wind and tide in our favor. The sail was up for part of the way. The weather became much colder, but the coldest part of our whole trip was on the launch from Kityang, as we had packed rugs, etc, and did not want to disturb our bundles.

Our unique boat trip, our jolly times, the delightful visit with Mr. and Mrs. Adams and the insight we derived from our peep at the mission work of inland China, will remain as bright spots in our memories thru-out our lives.