Baking at Inle – Snakes, Opium and the West Cashing in 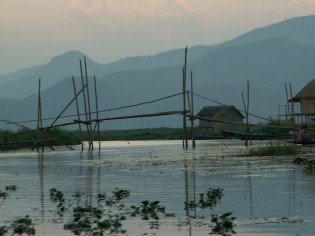 I was just trying to sort out and put away some papers when I got sidetracked by some diary entries from back when I had just fled the United States (I used to swear there was some kind of mass insanity going on there) and ended up in Burma. I was struggling with sugar addiction at the time, along with other things. Inle Lake is so beautiful, a huge lake that used to have fresh water dolphins! Amazingly colorful tribal hill-people and a five day market cycle around the lake. I had some ups and downs during this time, and some amazing experiences. Check out the Fire Balloons post as well. Italics are my current commentary to hopefully help clarify some things.

I am not quite sure what the date is–isn’t that just the most terrible sin? Well, all I know is that I am back at my secret, special, sacred spot made just for me. (Actually it was a meditation hut made just for that purpose–for anyone who wanted or needed to use it.) A lovely little bamboo hut on the top of a hill with the most gorgeous view of the lake and sunset. I got up here a bit late today, but now I know I must do it everyday.

The lake is flooding. They say the kitchen may be flooded in a couple of days. Then we can use canoes as we cook! This is so marvellous–I am the Baking and Pastry Chef and am surrounded by absolute beauty and wonderful people. It’s true I still get so caught up in my head-space about how horrible and terrible and cruel I am and how I shouldn’t eat carbs and all the other things I have to pick on myself about, but I think this is the spot to cure me of such evils. Who would imagine that I would get a job here–at the mystical, magical Inle Lake! 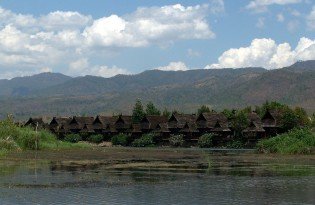 Such an interesting life…. From walking back in the dark from Nyaung Shwe, followed by a couple guys begging for 100 kyets. I don’t even have a single kyet right now so I couldn’t oblige and was quite annoyed I must confess. (The hotel hadn’t paid me in months). To eating fried Roselle with dried shrimp (yum) to seeing a fresh killed poisonous snake. Snakes are abundant now as the lake is so high. To getting into a–conversation about how poorly off Myanmar is.

I questioned a very interesting looking 56 year old Burmese man about 70% of the world’s heroin coming from the golden triangle in the 80s. He told me he knew all the facts….The British introduced the poppy to Shan State in 1825 and opened shops and started selling the opium to Burmese. Before that there wasn’t opium, it had to do with the Anglo-Burmese wars and the Opium Wars. Then later when the “White Chinese” or KMT (Kuomintang) were fighting along the Chinese border with the CIA this was a source of tons of money for them.

He then went on to saying something about 1993 when the US companies were the first into Myanmar with billions of dollars for beer companies. Heineken and Carlsburg. He declared himself neutral. Not pro-government–not pro-Aung San Suu Kyi. Neutral–like Switzerland–banking in. But quite displeased with the USA, England and China from what I could tell. (The same issues are faced again, now that the sanctions are being removed, but China, Thailand, Singapore and S. Korea have been raping Myanmar, so now the West just want to get in on the deal too, as they are nervous of China, with the port in Kyauk Phew).

I must’ve been tipsy by the end of the night because I told Tauk Tauk (the bartender) that he should try to go to the US for College! (His parents were involved in the ruby industry in Mandalay so they could probably have afforded it.)

The world is so strange and interesting. When you try to confine and limit it–all you get are aggravations and stress. As it will never fit into what we want or expect it to.

The following video tells the story of Khun Sa the Opium Drug Lord of Shan State.

Click here to cancel reply.
« To Live
Book Review – Cancer: Cause and Cure »
We use cookies to ensure that we give you the best experience on our website.
If you continue to use this site we will assume that you are happy with it.