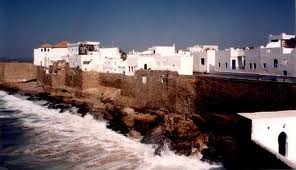 Folks have been asking for more stories. I was thinking about my time studying food preparation rituals in Morocco recently after reading Sunshine’s experiences in Egypt and decided to look through my old journals for a tale for you. I came across this story I wrote about a very crazy experience I had in a beautiful seaside town, Asilah, in Northern Morocco. There isn’t that much about food in here–except the sandwich that keeps coming up. Actually, Moroccan sandwiches are not like normal western ones. Made with really good bagettes and amazing fillings they are really something special. I wrote this in 1995.

Well, this story begins even before Dumb Blonde—lets just call her DB gets to Asilah. She is sitting on the train, stressing out because she doesn’t know where to get off. She has just read in her guide book about guides getting on trains and trying to pick up their victims from there, when…ta da! Door opens and in walks guide! Dumb Blonde is anxiously looking out the window, wondering what her best move is—make a jump for it at the most likely looking station, or ask somebody. Luckily?!? (Readers must decide if this is really luck) the guide sits down next to her and asks her the time. DB is at times remarkably astute, and she has this guy figured for a guide although he’s pretty sure he’s got her fooled.

He starts talking, she gives off all the hints and outright rudeness that she can to get rid of him, he jabbers on. He says he’s going to Tangier. “Great, I’m safe.” Thinks DB and decides to try to find out about Asilah. He mentions that Asilah is the next stop and asks if she knows Asilah—in her eagerness to appear intelligent and well informed she blurts out her first foolishness– “I’m going there!” More talk on the part of the guide and disinterested grunts from DB.

Asilah arrives, she leaps up and grabs her bags…what’s this? Guide Man is getting off too?! She quizzes him cleverly, “I thought you were going to Tangier.” He offers some vague reply. When they get off he walks her to the Medina while she at first tries to shake him—but being of such kind make-up can’t do it firmly enough, and also is figuring– “At least if I have a guide with me already, the rest of them will leave me alone.” –Oh dumb, dumb blonde.

Well he finds her a guesthouse that’s an OK price. She makes a break for the beach, but is picked up by Guide Man before going ten steps. He keeps trying to steer her to get a cup of coffee, but she is feeling clever and goes where she wants. Finally GM manages to gain some control by talking wildly of evil people lurking around every bend. This strikes fear into the heart of DB, making her docile and easily handled.

She continues, throughout the day to do her best to get rid of him, but to no avail.

In the evening, Guide Man hatches a clever scheme. Finally realizing that DB is close to broke herself, he confesses to her that he is a guide, not just some friendly fellow. He tells her of his scheme to con the city of Asilah. The shopkeepers here know him, so if he takes DB on a round of the tourist shops and she acts as if she is going to buy up the shops, but will come back the next day then he will get a stack of commission from the shopkeeper. He will pick up his share that night and they can get out of town before anyone realizes what is going on.

DB thinks this is a brilliant plan and begins dreaming of prancing through artifact filled tourist shops pointing out all kinds of exotic items. She vaguely wonders what Guide Man’s real motives are, and only then realizes that he was talking about giving her a cut of his profits—this makes her even more eager for the con to begin because the sooner she gets it over with, the sooner she will be rid of the Guide Man.

Alas, alack, DB and GM’s plan is a failure because there seems to be something missing…tourist shops. By the time they got around to going shopping everything is closed up. This makes DB highly suspicious of GM again, deciding he was just making it all up all along.

Back at the guesthouse GM is making himself comfortable all over her bed and is making all kinds of plans for the rest of her life. “We will go here and there, and to my mother’s and aunt’s and cousin’s…” claims Guide Man. DB is quiet, hatching plans to get him out of her room. It seems the only thing to do is to get the inevitable fight over with.

“Oh, I’m not sleeping here with you?”
“No, definitely not.”
“Why?”
“What do you mean why?” (some screaming and yelling in here as well)
“Listen to me, I like you from my heart, you understand?”
“I don’t care where you like me from.” Screams DB

–More why’s and rages and “I love you from my heart” comments for a while—oh here was a good one:

“But you are leaving soon and I want you to have a souvenir to remember me by” (!) – (did he mean a baby? I am still not sure)

Anyway she finally gets him out of the room by agreeing that:

“If she likes it she can go to his room”

He finally steps out of the room. The door is slammed and locked tight and she jumps into bed and waits—a few minutes later—knocking…

“Run. Yes!” She decides and packs her stuff pronto and sets go time for Operation Ditch Guide at 04:00 hours. She is being so sneaky. 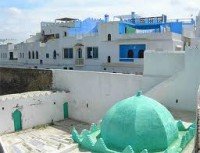 The Operation is well planned—or the instincts seem to come at the right times. She goes out, pretending it is only for the bathroom if Guide Man shows up—he doesn’t. She starts to get drowsy and worries she will fall asleep. Go time moves up to 03:00 hours. Then she gets another notion. Why not climb off the roof! Then she would be sure not to wake anyone up trying to sneak out the front door. There were several bodies she would have to tiptoe over to get out.

“Brilliant, what a mind!” She compliments herself and she creeps up to the roof and looks around, there is a spot that looks possible to climb down from! She grabs her bags and shoes and the Guide’s sandwich. She cleverly locks the door of her room and hides the key in an obvious place. She hopes that will stump Guide Man.

“Maybe he’ll think I’m sleeping until really late and by then I’ll be back in Rabat,” she chortles to herself.

Operation Ditch Guide is underway at 02:30 hours. Carefully dropping her quiet things to the ground below (i.e her jacket) She packs her luggage on her and tries to climb off of the roof, almost slipping—what a death defying woman! She climbs down a window, makes a huge racket, by not realizing the window is wide open. When she gets to the ground she realizes her shoes are still on the roof and has to go back up to get them.

On the ground she grabs her stuff and makes a dash around the corner and into a dark alleyway. Feeling triumphant she puts on her shoes and sets off jauntily to the beach, bragging to herself all the way. She plans to hang out there until 05:00 and get to the train and flee Asilah altogether. With all these fantasies of what a tough, strong amazon woman she is dancing in her head, she doesn’t notice that she is being surrounded by a pack of wild dogs.

Looking up she has her back to a railing onto the beach and the dogs are growling and moving in on her. Barking up a storm they leer in rabidly at her. She is terrified, but tries to project authority and reaches into her bag for Guide Man’s sandwich. Suddenly the dogs turn tail and flee, howling terrified into the shadows.

DB is the bold conquistador!

But no, she turns around and there is a little guy with a rifle behind her. “ Quick agi” (come) he says. So she figures she better, he grabs her hand and with great strength tries to drag her to some shadows.

“No way”, she says and puts up a fight with a mess of overwhelmed tears thrown into the mix. The tears manage to stop the man and he tries to calm her down (she was getting pretty hysterical I must admit by this point), and he tries to tell her in broken English and sign language that there are hoodlums and cut-throats out there and she better stick with him.

She sits on a log bench with him on the other end for a while. She eats the sandwich and throws a piece of the bread on the ground. This makes him very upset and he tries to explain to her that bread is sacred and you don’t go around throwing it on the ground. She is very sorry and appologetic. Suddenly he tries to kiss her and she quickly tries to grab her stuff and run away again. At this point another man appears from a small house and claims to be French and that if she leaves she will be killed by cut-throats. With everyone going on so much about cut-throat’s she is getting rather nervous about leaving. The man demands her passport and takes it into his little house. He insists he is “bolice”. He disappears for a while with it. The only reason she actually gave it to him is because it was about to expire and she has already ordered her replacement. Bolice Man seems to think she is CIA or some kind of a their and doesn’t give the passport back for an hour while he mocks her in simple French.

DB starts getting really loony by this point. Shivering and rocking herself she starts doing some muttering and mumbling of her own under her breath.

“Ha, I can still run, you idiots, it is just my passport, huh…heh…Yeah, yeah I’m CIA and if you mess with me you’ll be in trouble…I’ll beat you into bloody pulps…humph…”

Finally after a long while of Bolice Man hiding in the shadows watching her, he decides that he has played enough with his new toy and decides to leave her to the cut-throats and gives her back her passport. She bails after finally ditching the Gun Guy. Still, fearful of running into more cut-throats she finds a field with a couple goats and a thistle bush in it and hides behind it until it is about 05:00.

Still feeling clever, but quite foolish as well, realizing her brilliant escape plan could have killed her in several different ways she heads off to the train station to get the hell out of town, before she gets into any more trouble.

On the train, hamduleela, there is no guide. Operation Ditch Guide was successful—barely.

Click here to cancel reply.
« Christmas Jazz Club
Ubuntu Vancouver Maverick Meerkat Party »
We use cookies to ensure that we give you the best experience on our website.
If you continue to use this site we will assume that you are happy with it.