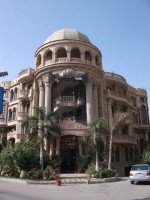 It has been another month or so since I last wrote, and since I promised to try and be better about sending out more regular updates I thought it was probably about time to fill you in on all the exciting things happening this past month.

The first thing which happened was that I went to a peace-building conference here in Egypt. Anyway, it turns out this Canadian (Brice Balmer) was one of the original people working on developing restorative justice as a viable alternative to the current criminal justice system. It was quite interesting hearing him talk about his experiences and his insights, and it was also great to watch the Egyptians attending the conference begin to think about possible ways to contextualize the things he was saying.

Shortly after this peace conference we had a retreat with a series of workshops. We had a speaker come who was a truly delightful woman who had been through some extremely traumatic experiences. I won’t get into all of the depressing details, but she is the mother of a murdered daughter and has spent her life working through trauma healing for herself and for victims of different acts of violence.

It was interesting because it certainly provides a much needed addition to criminal justice. The current criminal justice system in most countries assumes that any crime is done against the state, so the state deals with it and it ignores the needs of the victim (or assumes that it is taking care of the victim by exacting ‘justice’ on the offender).

Anyway, it was particularly interesting to me because the society as a whole here is quite violent and in a lot of parts of Egypt they still adhere to the old tribal cultural rules of exacting revenge on any member of another person’s family for a wrong done to them. Quite a few people have experienced violence either themselves or in their family and I can see some of the effects of trauma in the society as a whole. So it worked out well having Wilma as the guest speaker also at the second Peace Conference that I went to. It was once again very exciting to see how people could immediately see the need for some type of trauma healing to help people in their society. They were quite anxious to have Wilma come back and do another training with some other key people from around the country so they could spread the help that she was offering.

Although I was able to have a taste of what my new job will be, I had to return once again to Beba to attempt to teach one more course of English before I moved to Cairo. However once I returned I realized that I wouldn’t actually be teaching anymore. It is exams time here and also the beginning of summer, so it seemed as if half the people were studying for exams and had no time for English classes, and the others who weren’t taking exams were travelling because it was the beginning of summer. So I showed up to teach and only one student showed up for each of my classes.

No one here can believe that I will be living by myself in an apartment with three bedrooms. They were quite horrified when they found out, and it’s actually much more luxurious conditions than I’ve been used to prior to this. I’ve always had to have roommates because I couldn’t afford my own place. A lot of my friends here still live with their parents when they get married because they can’t afford to do anything different. I think the average wage is around $60 a month or so, which certainly isn’t enough to be able to afford an apartment.

I found some guys that play basketball at a local sports club. So that’s another reason I’m excited about moving to Cairo. Two of the guys play for local club teams that play at an international level so it was some great competition, and some good contacts for me to make. I’m going to try and get on a club team I think in Cairo, but I don’t know how they feel about having foreigners play for them. One of the guys asked me if he was good enough to play in the NBA, and I told him he was very good, but he’d have to start at about a D3 college level. He asked me how I thought he would match up against Kobe, which I thought was a joke, so I laughed. Only when I realized he wasn’t laughing with me did I understand that he was serious about his NBA question and I felt a bit bad.

I also just got back from a lovely long weekend on the Red Sea coast of the Sinai Peninsula. It really felt like I wasn’t in Egypt, and there were probably almost as many non-Egyptians living there as Egyptians. It was a very strange but wonderful experience and if anyone is planning on spending an extended amount of time in Egypt I have to say Dahab is a very necessary relief from the rest of it. They don’t particularly care that you’re a foreigner while you’re in Dahab, which may well be the only place in Egypt where that’s true. My biggest frustration here in Egypt is the lack of anonymity.

I can’t walk down the street almost anywhere without someone coming up to me and asking what my name is and what my favorite food is or a lot of times just yelling it at me from somewhere without really expecting an answer, which is why Dahab was such a welcome relief for me. I really do love Egypt and Egyptians, especially the friends I have who are Egyptian. However sometimes the frustrations come out, and an escape really is nice once in awhile. But I do love it here.

And I think I will actually end on that note. I do love it here, and I am looking forward to what the next three years hold for me. Also, in this period of transition, I just wanted to say thank you again to all of you who have made this possible for me. I would not have had these extremely exciting opportunities ahead of me now if you all hadn’t helped me get out here in the first place and your support during this year has been a great encouragement to me. So thank you for everything.