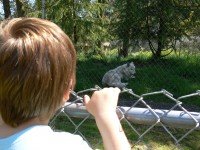 I have been wanting to get to Wolf Haven International for a while, so when our niece turned two we took the kids on a trip to see the wolves. Wolf Haven is just South of Olympia in Washington State and takes in wolves that have been kept as pets. I had assumed that the wolves were eventually released back into the wild, but once a wolf has lived around humans they can’t survive in the wild. Wolves are wild at heart so once they get past a certain age they are unpredictable (which is why they can’t be kept as pets). 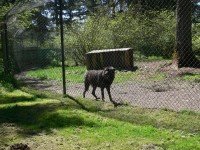 This was the first time I met wolves up close and personal. Wolf Haven has a few different kinds and they mostly looked like quite friendly dogs. But, there was one wolf that might almost fit the description of the wicked wolf we read of in Little Red Riding Hood tales, he was very big, with lanky legs and scraggly black hair and an evil gleam in his eye. The whole tour didn’t take very long, but we did find out that there is a pack of about three couples living in Northern Washington, wolves are endangered and still very hated by farmers.

I have always had a fascination with wolves after a nightmare I had of being chased by a large green wolf when I was about 5 years old. This is taken from Medicine Cards

by Jamie Sams and David Carson, from the section on Wolf Medicine:

Wolf is the pathfinder, the forerunner of new ideas who returns to the clan to teach and share medicine. If you were to keep company with Wolves, you would find and enormous sense of family within the pack, as well as a strong individualistic urge.

Wolf is represented by the Dog Star, Sirius, which was thought to be the home of the gods by the ancient Egyptians, and is still considered so by the Dogan tribe in Africa.

The gift of wisdom comes to you when you have walked enough pathways and found enough dead ends to truly know the forest. In the discovery and re-discovery of every inch of ground comes the knowledge that nothing ever remains the same.

Wolf Medicine empowers the teacher within us all to come forth and aid the children of Earth in understanding the Great Mystery and life.

Since it is the first of the month it seems a good time to invoke the wolf spirit for the month of July. Hopefully this will bring forth in all of us the things we need to say or do to help our world begin to spin more peacefully and healthily!

Please take a second and sign this petition to stop wolves being hunted.