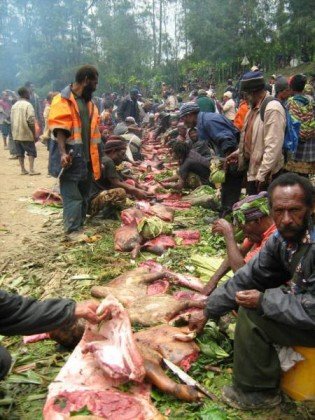 Ever since I can remember, I have enjoyed working with food. I believe this has to do with the amount of involvement I had with fresh local food, growing up in the highlands of Papua New Guinea. The Mount Hagen market was filled with fantastic fruits and vegetables and the gardens around our home were full of sweet potatoes, coffee, sugar cane and peanuts. The vibrant community gatherings that surrounded a special ceremony such as a bride price always included a pig kill. It is wonderful to have a whole community working together, each in their various capacities to make a huge feast. One of my first memories is of a large pig-kill in the highlands of Papua New Guinea, where my father was a missionary. At the end of this article there is a cute video of a traditional pig kill in PNG, which will give you a good idea of what my first mumu (ground oven) was like.

The Origins of Hella Delicious…

The seed of Hella Delicious was planted in a village in the highlands of Papua New Guinea in 1980. The village had been on the top of a hill but had been leveled during World War II when the Australians accidentally bombed it and took off the top. The villagers turned the event into a blessing from god and built an A-frame steel church in the middle of the newly created plain. I must’ve been around 6 years old when there was a huge New Years festival (which included a pig-kill, of course) held at the sing-sing grounds at the bottom of the hill where we lived. I had a good friend, Alice, who lived down near the sing-sing grounds (a big field the size of a foot-ball field where traditional dancing, fighting, bride-price and pig-kills were held), so I used her as an excuse to escape from home and go check out the festivities on my own. 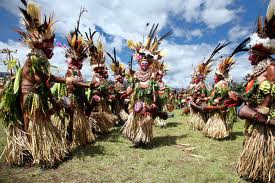 I didn’t know what I was getting into, but I remember the event so vividly it must have really been a bit of a shocker! There was a big bamboo patch as you entered the field, with a low thatched house behind it which faced out on the open field. There were a few large trees on the field, but mostly it was long, flat and open, just like a football field, and often that is what it was used for. The trees, I was told, were special trees, the various trees and other plants that were grown in this area were used for making spears and arrows.

Follow this link for a great series of photos showing preparation of a mumu.

Under one of these trees at the beginning of the field, a man clubbed a pig over the nose and as the blood spurted out and the pig screamed and shrieked that blood-curdling pig squeal as it died (I think these days they just shoot the pig in the head). Quickly moving down the field I came to the next station where the pigs were singed to remove the hairs. All around me there were greased up warriors with bright bird-of-paradise feathers in their hair, and tufts of leaves covering their behinds, and lots of excited half-naked kids. 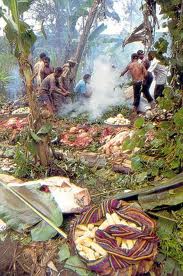 A little further along, large square fire-pits manned by strong men with long branches cut into sturdy tongs were used to pick up large rocks and put them into the coals. These rocks were being heated for the ground ovens (called mumu in PNG). Care had to be taken over which rocks were chosen to be heated as the wrong type could explode when heated. Once these rocks were heated they were taken a little further down the field where a series of large pits had been dug about 4-5 feet deep. They were lined with banana leaves and then the foods were layered into the pits with the hot rocks. Sweet potatoes and other root vegetables were one layer, topped with some kind of an edible fern, which was then covered with chunks of pig meat and then another series of layers was repeated, until finally it was covered with the banana leaves and sealed up tight to cook for a few hours.

As I finally approached the end of the incredibly long field I found the pigs laid out in rows on banana leaves laid out on the ground. This was a massive bride-price pig kill and the pigs were being laid out to display the wealth that was being given. The pigs had been gutted, cleaned and cut in half, each half laid on banana leaves and displayed to show off their fat. I remember coming upon a pig cut open with all of her little piglets tucked into one half of her. I can remember being pretty sad, seeing that, someone explained to me that whoever killed the pig, hadn’t realized she was pregnant. Those 6 or 8 piglets would have been more valuable if they had been allowed to grow up.

This event was more monumental on my psyche than I realised until recently. I studied anthropology in college and specialised in food preparation rituals. I have believed for a very long time that it is important to get to the basics and what is more basic than food? Everyone needs it! Our food rituals have been usurped by this fast-food culture.

It is easy enough to create your own rituals around food, it is also good to be aware of why you are practicing these rituals, and to realise that they are flexible and if they aren’t working for you, you can find a new ritual, or if your goals have changed you may also want to change your rituals in accordance with that. I guess the real key is to not let anyone else control these intimate rituals-that is the ultimate slippery slope, Monsanto and other industrial agribusiness companies know this as well. Why else do you think they go for the basics, food, seed, water?