The Gift of Typhoid 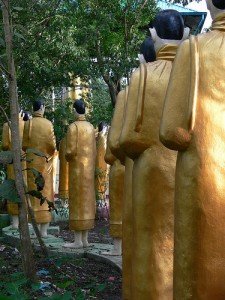 I was given a melted popsicle from a local ice-cream seller while visiting a pagoda in the suburbs of Yangon/Rangoon. It was a bit of a surreal experience. The old man smiled so kindly as he eagerly handed it to me. He was so sweet and toothless. He had come across me as I was trying to find the vendor of the incense stall so I could offer some incense to Garuda my Burmese deity. In Myanmar your horoscope is the day of the week you were born on. I am Sunday born and therefore my Burmese name must begin with an A and my special animal is the Garuda which is half-beast and half-bird. Interestingly it is said that worship of Garuda is believed to remove the effects of poisons from one’s body. On this day, my worship of Garuda brought a colony of destruction down on my gut.

We were visiting Mei La Mu Pagoda, which has marvelous mystical statues depicting the stories behind the origins of the pagoda. Mei La Mu, according to legends was a lady who was born out of a la-mu fruit (mangrove) and was raised by a hermit. Her son is the famous King Okkalapa who was the original donor of Shwedagon Pagoda. It is a fun pagoda, a real folk-pagoda which have full moon festivals that include all sorts of games for gaining merit, boisterous drinking and a plethora of food stalls selling special street foods. It is also a favorite pagoda for children as the statues, which include a huge concrete crocodile, bring their legends to life.

With my incense burning I bowed down three times before the Sunday shrine and made a wish for world peace and personal happiness while placing the incense into the sand in the pot at the base of the shrine. Without thinking I then tore open the bright blue melted popsicle and sucked it down, grimacing at the syrupy sweet sickly taste. I lived in Asia most of my life and knew quite well the terror of typhoid and never to consume ice or melted popsicles under such conditions, so I don’t know what I was thinking, obviously I wasn’t. Unfortunately for all the local children who love popsicles my following experience is all too well known, although many of them may not survive it…

Not surprising, in about 10 days I had a fever and threw up violently. I assumed it was simply a bought of food poisoning and neglected getting any blood tests done. Finally one day I was so tired at about 2pm that I could hardly move, I realized I better go get tested for typhoid and sure enough the bacteria were colonizing my intestines. I was put on serious antibiotics the same day for ten days.

Typhoid destroys the friendly micro-organisms of the gut so completely that the recovery period even after a strong course of antibiotics is said to be three months. During this time I would get so tired I couldn’t even lift my arm and would frequently get irrationally emotional and paranoid. In the first couple weeks after I completed the antibiotics, instead of relaxing and recovering, I catered for the housewarming of the new British Ambassador. That day as I cooked, I couldn’t believe the waterfalls of sweat streaming from me and nearly fainted just before the guests arrived. A couple days later I was on a flight that overnighted in Taiwan on the way to New York, this two day trip which knocked me out completely.

As a result of all this my recovery time period ended up being much longer than three months. I probably damaged my small intestine and I couldn’t do physical work for about 18 months. It also made it blindingly clear to me how important the flora of our intestines is for the nervous system.

During this time I started to look into fermented and cultured foods in order to re-establish the micro-organisms in my gut that had protected me so completely for most of my life. It has been an eye-opening journey and has led me to the understanding of humankind as a symbiotic organism that needs bacteria and fungus to access our full potential.