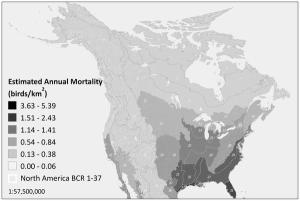 This is very sad news. Not only are we harming our own health and destroying the bees but we are killing millions of birds with our cellphone addiction. This number is destined to rise dramatically by the end of the year with smartphones cheaper than ever and usage increasing exponentially. It is rather disappointing to realise that we humans are still more concerned about saving a penny and looking cool among our peers than making the effort to not contribute to the destruction of the earth and the health of the plants, birds and animals that co-exist with us on this lovely planet.

Every year nearly 7 million birds die as they migrate from the United States and Canada to Central and South America, according to a new USC study published on April 25, 2012 in the journal PLoS ONE.

The birds are killed by the 84,000 communication towers that dot North America and can rise nearly 2,000 feet into the sky, according to the authors of “An Estimate of Avian Mortality at Communication Towers in the United States and Canada.”

Placing that figure in context, the Exxon Valdez oil spill killed 250,000 birds and the Empire State building is 1,250 feet high.

“This is a tragedy that does not have to be,” said lead author Travis Longcore, associate professor in the USC Spatial Sciences Institute at the USC Dornsife College of Letters, Arts and Sciences.

The taller the tower the greater the threat, the study found. The 1,000 or so towers above 900 feet accounted for only 1.6 percent of the total number of towers. Yet these skyscraper towers killed 70 percent of the birds, about 4.5 million a year, Longcore said.

Most of the birds spent winter in places like the Bahamas and summer in Canada. With names like the Common Yellowthroat and the Tennessee Warbler, they could fit in the palm of one’s hand.

“These birds eat insects and keep our forests healthy,” Longcore said. “They are quite beautiful. We have a long history of appreciating birds. Millions of people watch birds.”

However, the birds are not generally killed by running into the tower itself but the dozens of cables, known as guy wires, that prop up the thin, freestanding structure, Longcore said.

During bad weather, the birds were pushed down by cloud cover and flew at lower altitudes. The clouds also removed navigation cues, such as stars, leaving only the blinking or static red lights of towers.

The blinking did not fool the birds, but towers with a static red light resulted in more dead birds.

“In the presence of the solid red lights, the birds are unable to get out of their spell,” Longcore said. “They circle the tower and run into the big cables holding it up.”

Longcore estimated that changing the steady-burning lights on the 4,500 towers greater than 490 feet tall (about 6 percent of the total) could reduce mortality about 45 percent, or about 2.5 million birds. The study also recommended that businesses share towers to reduce their number and build more freestanding towers to reduce the need for guy wires.

In 2005, Longcore and his colleagues started collecting and analyzing data from field studies that counted the number of bird kills at communication towers across the United States. The team only used findings that documented bird kills for at least a year and in some cases for several decades.

The numbers were scrutinized to find the average bird mortality based on height, the guy wires and the types of lights affixed to the tower.

The team then matched up tower types, sizes and attributes of 38 tower studies, applying those findings to the 84,000 towers across Canada and the United States in preparation for the new publication, which also was submitted to the Federal Communications Commission.

“One of the things this country has been great about is saying we care about not losing species on our watch,” Longcore said. “With these towers, we are killing birds in an unnatural way. This is senseless.”

The study, which does not include shorter towers that typically are used for mobile telephone transmission, focused on towers taller than 180 feet, which typically provide TV and radio frequencies.

The study was funded in part by The Urban Wildlands Group, Environment Canada, the American Bird Conservancy and Defenders of Wildlife.

Click here to cancel reply.
« Biofilms as Human Gut Mycorrhizals
Spying on Scientists: How the FDA Monitored Whistleblowers Who Raised Concerns over Radiation »