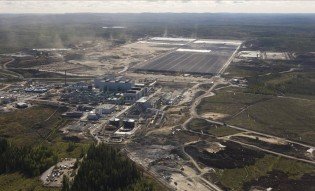 This is a short text to help enlighten a worldwide audience about what’s happening in Finland – a Nordic country that is said to have one of the world’s most advanced democracies, lowest corruption rate, and a vast abundance of clean lakes and nature. Well, since Talvivaara mining company was founded this doesn’t seem to be completely true anymore. After reading this brief summary the reader is advised and encouraged to follow the links, news and other resources at the end of this article.

Officially, Talvivaara is a Finnish-based nickel mining business, but for many who have followed the case closer it seems to be just a moneymaking environmental crime company, leading a plot of full-blown uranium scam. Talvivaara, all through its operations, has ignored and overlooked the local people, their natural resources and Finnish environmental legislation.

The Talvivaara mining company was established in 2004 when it acquired the rights to mine sites at Sotkamo in Eastern Finland. The appropriate permits to commence mining were obtained in 2007, and metals production started late in 2008. In 2010 the company announced the commencement of uranium production as a “by-product” from its normal mining operations in Sotkamo. Talvivaara neglected to mention uranium in its EIA (Environmental Impact Assesment) statements, even though the company knew in advance that the process used in the mine separates uranium from ore. There was no mention of uranium mining to local municipalities or residents before the mine was already underway. Yet uranium reserves at the area have been well-known since the 1980’s. 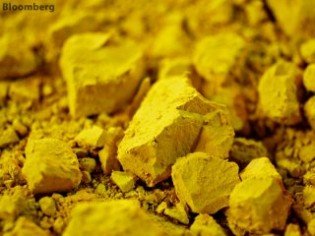 Picture by: Bloomberg News Finland’s Talvivaara has announced plans to modify its production processes to extract uranium concentrate, or yellowcake.

Talvivaara gained access to uranium production through the back-door; their environmental permit was granted for Europe’s largest nickel mine, while later it “turned out” that the area is also a potential uranium production site with huge reserves. Now, Talvivaara has signed a deal with Cameco, a Canadian uranium corporation, and is carrying on plans to become Europe’s largest uranium mine as well.

During only its first couple of years in operation Talvivaara mine has systematically failed to follow its environmental permits, having consistently exceeded its permitted effluent levels, officially polluted four lakes beyond regular usage, and now spreads its pollutants to important water courses within a 80 kilometre radius from the mining area. This has all happened despite the fact that Talvivaara’s environmental permit was granted on the basis that pollutants would not spread beyond the mine.

There have been numerous pollutant leaks throughout Talvivaara’s history, including one major leak in 2010 from the gypsum precipitate pool (also containing uranium). This major leak was publicly announced by Talvivaara two days after the incident. Talvivaara company systematically overlooks the faults, harm and pollution it is causing and dismisses health and environmental claims. The environmental impact caused by Talvivaara’s operation is probably already irreversible – and if large-scale uranium production is allowed to proceed it would unleash a whole new set of dangers and toxins upon the Finnish wilderness and people.

In February 2011, Cameco Corporation signed a contract with Talvivaara to build a uranium extraction plant on the site of their Sotkamo nickel mine. It is expected to produce between 350 and 500 tons per year. Euratom and the European Commission have already granted their approval for the uranium processing facility.

The Finnish government has also granted permission to Talvivaara to start producing uranium. This approval was granted despite the fact that there are lawsuits raised, complaints, and police investigations concerning Talvivaara’s operation. For example, the Finnish Association for Nature Conservation (SLL) has asked the Supreme Court to overturn the uranium decision, as it violates Finland’s law on nuclear energy. There is also an ongoing police investigation concerning Talvivaara’s environmental impact report. Talvivaara’s Environmental Permit for uranium extraction and the general update of their Environmental Permit are now being processed by Northern Finland Regional State Administrative Agency.

In the planned expansion of operations, Talvivaara seeks to heavily increase pollutant concentrations in the mine’s effluent; for example 40 times more sulphate (7000 mg/l) and 20 times more natrium (3000 mg/l). Environmental microbiologist Helvi Heinonen-Tanski from the University of Eastern Finland has said that “Talvivaara’s demands of 7000 mg per litre of sulphate emissions is absurd. Such amounts would kill freshwater fish and roe, preventing fry hatching. It would even threaten the drinking water quality. ”

In making the whole world aware of Talvivaara’s mining and uranium madness, Finland truly needs support and help from abroad. These disastrous plans for Europe’s largest uranium mine aren’t widely known – but the results surely will be.

Wherever uranium has been mined, the surrounding communities and nature have suffered. That is why uranium mining has been stopped nearly everywhere in Europe. It’s also not a secret that Talvivaara’s new partner, Cameco, is infamous for the leaking of radioactive waste into Lake Ontario and has been involved in US uranium weapons used in the Gulf War.

For the sake of future generations and chances for sustainable livelihoods in the region, Talvivaara’s environmental permit should have been revoked a long time ago. For the very same reason, Talvivaara’s plans to expand their operation and start large-scale uranium extraction need to be cancelled. And this is all the more important given that Talvivaara mining company has already proven itself to be incapable and unwilling to follow its environmental permit.

Here are few links in English about this little known but tragic disaster which has been allowed to continue in Finland for too many years already:

Website of local resident with bits of English information

Blog with a few selected Finnish to English translated articles:

And finally, a chronological set of news in English from HS (Helsingin Sanomat – Finnish newspaper) and YLE (Finnish national broadcast network) detailing the history of these unfortunate events: