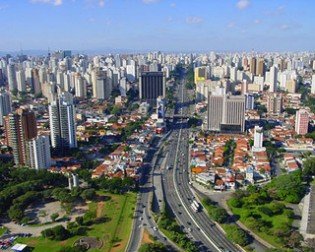 Lately I’ve been thinking more and more that we need to move to Brazil, now here is one more reason to get a fire under my butt to do so! I have been dreaming of how wonderful the world would be if we would ban all billboards and replace them with murals. Sao Paulo has gone even one step further and banned all ‘visual pollution’ what a great idea. I can’t wait for this to happen here in North America. This simple action would really open up our cities to a lot more diversity, happiness and awareness.

This organization is doing a great job to break the commercial stronghold corporations have over us: The Center For a New American Dream.

We seek to cultivate a new American dream—one that emphasizes community, ecological sustainability, and a celebration of non-material values. 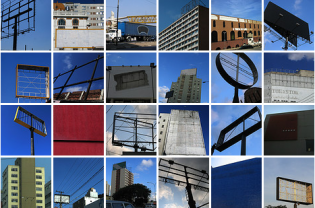 Click on the image above to view Tony de Marco's Flickr photo set of Sao Paolo immediately after the ban.

Imagine a city of 11 million inhabitants stripped of all its advertising. It’s nearly impossible when the clutter and color of our current urban landscapes seem inextricably entwined with the golden arches of McDonald’s or the deep reds of Coca-Cola.

Yet for the residents of São Paulo, Brazil, this doesn’t require imagination: city dwellers simply have to walk down the street and look around to see a city devoid of advertisements.

In September 2006, São Paulo’s populist mayor, Gilberto Kassab, passed the so-called “Clean City Law,” outlawing the use of all outdoor advertisements, including on billboards, transit, and in front of stores.

Before being enacted, the law triggered grave alarm among city businesses and other economic constituents. Critics worried that the advertising ban would entail a revenue loss of $133 million and a net job loss of 20,000. Fears that the city would look worse without the mask of the media alarmed residents. Despite the concerns, the law passed and the 15,000 billboards cluttering the world’s seventh largest city were taken down.

Five years later, São Paulo continues to exist without advertisements. But instead of causing economic ruin and deteriorating aesthetics, 70 percent of city residents find the ban beneficial, according to a 2011 survey. Unexpectedly, the removal of logos and slogans exposed previously overlooked architecture, revealing a rich urban beauty that had been long hidden.

“São Paulo’s a very vertical city,” said Vinicius Galvao, a reporter with Folha de São Paulo, Brazil’s largest newspaper, in an interview with NPR. “That makes it very frenetic. You couldn’t even realize the architecture of the old buildings, because they were just covered with billboards and logos and propaganda. And there was no criteria.”

No longer covered in homogenous and imposing signs, the unique character of São Paulo was able to resurface. Admittedly, not all of the revelations proved beautiful: shantytowns that pepper the city’s streets, once hidden under massive signs, revealed gross inequalities. But bringing the situation to light incited residents to improve conditions and begin discussing solutions. No longer could actual problems be masked by artificial solutions.

In today’s synthetically colored cities, people assume that vibrancy derives from neon lights and advertising campaigns. The ban in São Paulo reminds the world that it’s a city’s inhabitants and cultural heritage that bring the true flavor.

“My old reference was a big Panasonic billboard,” Galvao told NPR. “But now my reference is an art deco building that was covered [by the massive sign]. So you start getting new references in the city. The city’s now got new language, a new identity.”

Hopefully one day, communities throughout the world can adopt this new language and new identity and focus on the unique aspects of their communities, instead of on mass-produced ones.

To see images of São Paolo immediately following the ban, check out this photo collage.

Interesting mini-documentary describing the advertising ban and its effects on the city: