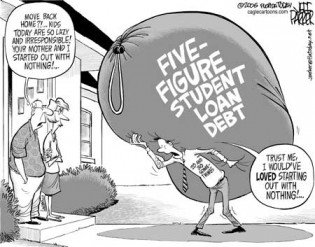 A comment on one of my posts about the student loan scandal lead me to this post: Edumacated, what a great cartoon too. Very true, I have reposted that as well. Another very important article about the whole issue of what is going to happen when the student loan bubble finally bursts as well as some great info on how we got to this point and a bit of history around the whole issue. I just have to repost most of this article from N+1, they did a great job. Please read the whole article, Bad Education by Malcolm Harris here.

The Project On Student Debt estimates that the average college senior in 2009 graduated with $24,000 in outstanding loans. Last August, student loans surpassed credit cards as the nation’s single largest source of debt, edging ever closer to $1 trillion. Yet for all the moralizing about American consumer debt by both parties, no one dares call higher education a bad investment. The nearly axiomatic good of a university degree in American society has allowed a higher education bubble to expand to the point of bursting.

Since 1978, the price of tuition at US colleges has increased over 900 percent, 650 points above inflation. To put that number in perspective, housing prices, the bubble that nearly burst the US economy, then the global one, increased only fifty points above the Consumer Price Index during those years. But while college applicants’ faith in the value of higher education has only increased, employers’ has declined. According to Richard Rothstein at The Economic Policy Institute, wages for college-educated workers outside of the inflated finance industry have stagnated or diminished. Unemployment has hit recent graduates especially hard, nearly doubling in the post-2007 recession. The result is that the most indebted generation in history is without the dependable jobs it needs to escape debt.

During the expansion of the housing bubble, lenders felt protected because they could repackage risky loans as mortgage-backed securities, which sold briskly to a pious market that believed housing prices could only increase. By combining slices of regionally diverse loans and theoretically spreading the risk of default, lenders were able to convince independent rating agencies that the resulting financial products were safe bets. They weren’t. But since this wouldn’t be America if you couldn’t monetize your children’s futures, the education sector still has its equivalent: the Student Loan Asset-Backed Security (or, as they’re known in the industry, SLABS).

SLABS were invented by then-semi-public Sallie Mae in the early ’90s, and their trading grew as part of the larger asset-backed security wave that peaked in 2007. In 1990, there were $75.6 million of these securities in circulation; at their apex, the total stood at $2.67 trillion. The number of SLABS traded on the market grew from $200,000 in 1991 to near $250 billion by the fourth quarter of 2010. But while trading in securities backed by credit cards, auto loans, and home equity is down 50 percent or more across the board, SLABS have not suffered the same sort of drop. SLABS are still considered safe investments—the kind financial advisors market to pension funds and the elderly.

With the secondary market in such good shape, primary lenders have been eager to help students with out-of-control costs. In addition to the knowledge that they can move these loans off their balance sheets quickly, they have had another reason not to worry: federal guarantees. Under the just-ended Federal Family Education Loan Program (FFELP), the US Treasury backed private loans to college students. This meant that even if the secondary market collapsed and there were an anomalous wave of defaults, the federal government had already built a lender bailout into the law. And if that weren’t enough, in May 2008 President Bush signed the Ensuring Continued Access to Student Loans Act, which authorized the Department of Education to purchase FFELP loans outright if secondary demand dipped. In 2010, as a cost-offset attached to health reform legislation, President Obama ended the FFELP, but not before it had grown to a $60 billion-a-year operation.

Even with the Treasury no longer acting as co-signer on private loans, the flow of SLABS won’t end any time soon. What analysts at Barclays Capital wrote of the securities in 2006 still rings true: “For this sector, we expect sustainable growth in new issuance volume as the growth in education costs continues to outpace increases in family incomes, grants, and federal loans.” The loans and costs are caught in the kind of dangerous loop that occurs when lending becomes both profitable and seemingly risk-free: high and increasing college costs mean students need to take out more loans, more loans mean more securities lenders can package and sell, more selling means lenders can offer more loans with the capital they raise, which means colleges can continue to raise costs. The result is over $800 billion in outstanding student debt, over 30 percent of it securitized, and the federal government directly or indirectly on the hook for almost all of it.

If this sounds familiar, it probably should, and the parallels with the pre-crisis housing market don’t end there. The most predatory and cynical subprime lending has its analogue in for-profit colleges. Inequalities in US primary and secondary education previously meant that a large slice of the working class never got a chance to take on the large debts associated with four-year degree programs. For-profits like The University of Phoenix or Kaplan are the market’s answer to this opportunity.

While the debt numbers for four-year programs look risky, for-profit two-year schools have apocalyptic figures: 96 percent of their students take on debt and within fifteen years 40 percent are in default. A Government Accountability Office sting operation in which agents posed as applicants found all fifteen approached institutions engaged in deceptive practices and four in straight-up fraud. For-profits were found to have paid their admissions officers on commission, falsely claimed accreditation, underrepresented costs, and encouraged applicants to lie on federal financial aid forms. Far from the bargain they portray themselves to be on daytime television, for-profit degree programs were found to be more expensive than the nonprofit alternatives nearly every time. These degrees are a tough sell, but for-profits sell tough. They spend an unseemly amount of money on advertising, a fact that probably hasn’t escaped the reader’s notice.

Higher education seems an unlikely site for this kind of speculative bubble. While housing prices are based on what competing buyers are willing to pay, postsecondary education’s price is supposedly linked to its costs (with the exception of the for-profits). But the rapid growth in tuition is mystifying in value terms; no one could argue convincingly the quality of instruction or the market value of a degree has increased ten-fold in the past four decades (though this hasn’t stopped some from trying). So why would universities raise tuition so high so quickly? “Because they can” answers this question for home-sellers out to get the biggest return on their investments, or for-profits out to grab as much Pell Grant money as possible, but it seems an awfully cynical answer when it comes to nonprofit education.

First, where the money hasn’t gone: instruction. As Marc Bousquet, a leading researcher into the changing structures of higher education, wrote in How The University Works (2008):

“If you’re enrolled in four college classes right now, you have a pretty good chance that one of the four will be taught by someone who has earned a doctorate and whose teaching, scholarship, and service to the profession has undergone the intensive peer scrutiny associated with the tenure system. In your other three classes, however, you are likely to be taught by someone who has started a degree but not finished it; was hired by a manager, not professional peers; may never publish in the field she is teaching; got into the pool of persons being considered for the job because she was willing to work for wages around the official poverty line (often under the delusion that she could ‘work her way into’ a tenurable position); and does not plan to be working at your institution three years from now.”

If overfed teachers aren’t the causes or beneficiaries of increased tuition (as they’ve been depicted of late), then perhaps it’s worth looking up the food chain. As faculty jobs have become increasingly contingent and precarious, administration has become anything but. Formerly, administrators were more or less teachers with added responsibilities; nowadays, they function more like standard corporate managers—and they’re paid like them too. Once a few entrepreneurial schools made this switch, market pressures compelled the rest to follow the high-revenue model, which leads directly to high salaries for in-demand administrators. Even at nonprofit schools, top-level administrators and financial managers pull down six- and seven-figure salaries, more on par with their industry counterparts than with their fellow faculty members. And while the proportion of tenure-track teaching faculty has dwindled, the number of managers has skyrocketed in both relative and absolute terms. If current trends continue, the Department of Education estimates that by 2014 there will be more administrators than instructors at American four-year nonprofit colleges. A bigger administration also consumes a larger portion of available funds, so it’s unsurprising that budget shares for instruction and student services have dipped over the past fifteen years.

When President Obama spoke in the State of the Union of the need to send more Americans to college, it was in the context of economic competition with China, phrased as if we ought to produce graduates like steel. As the near-ubiquitous unpaid internship for credit (in which students pay tuition in order to work for free) replaces class time, the bourgeois trade school supplants the academy. Parents understandably worried about their children make sure they never forget about the importance of an attractive résumé. It was easier for students to believe a college education was priceless when it wasn’t bought and sold from every angle.

If tuition has increased astronomically and the portion of money spent on instruction and student services has fallen, if the (at very least comparative) market value of a degree has dipped and most students can no longer afford to enjoy college as a period of intellectual adventure, then at least one more thing is clear: higher education, for-profit or not, has increasingly become a scam.

Today, student debt is an exceptionally punishing kind to have. Not only is it inescapable through bankruptcy, but student loans have no expiration date and collectors can garnish wages, social security payments, and even unemployment benefits. When a borrower defaults and the guaranty agency collects from the federal government, the agency gets a cut of whatever it’s able to recover from then on (even though they have already been compensated for the losses), giving agencies a financial incentive to dog former students to the grave.

In addition to the billions colleges have spent on advertising, sports programs, campus aesthetics, and marketable luxuries, they’ve benefited from a public discourse that depicts higher education as an unmitigated social good. Since the Baby Boomers gave birth, the college degree has seemed a panacea for social ills, a metaphor for a special kind of deserved success. We still tell fairy tales about escapes from the ghetto to the classroom or the short path from graduation to lifelong satisfaction, not to mention America’s collective college success story: The G.I. Bill. But these narratives are not inspiring true-life models, they’re advertising copy, and they come complete with loan forms.

Click here to cancel reply.
« Atomic Gardens: Irradiated Mutants to Save the World!
Local/Global – Start With Your Cells »