Atomic Gardens: Irradiated Mutants to Save the World! 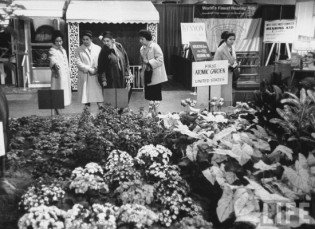 Ah, the good ole days…. It is really incredible to look back now and think that Atomic Gardens were really a thing. This is a very interesting interview with a woman who is studying the Atomic Gardens, it is good to remember our history and how little we often know about the forces we are messing with!

The following interview is with Paige Johnson who works as a nanotechnology researcher at the University of Tulsa, Oklahoma. When not inventing new ways to fabricate nanobatteries and other advanced materials, she moonlights as an independent scholar of garden history. She has published articles on the “outlandish” garden hydroengineering of Isaac de Caus and the technological motifs of Art Deco landscapes, among other topics. Additionally, she maintains two landscape-themed blogs, Garden History Girl and Playscapes.

Her current landscape research is focused on the strange and fascinating story of atomic gardening, a post-war phenomenon in which plants were irradiated in the hopes of producing beneficial mutations. Considering recent nuclear events in Japan and the ever ongoing concern for food security, it’s a topic that’s sure to resonate.

We asked Johnson to share some of her research in this interview.

Pruned: So basically what are atomic gardens? 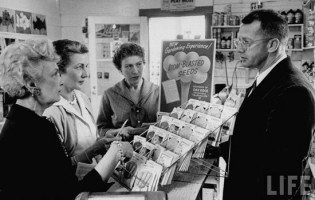 Paige Johnson: After WWII, there was a concerted effort to find ‘peaceful’ uses for atomic energy. One of the ideas was to bombard plants with radiation and produce lots of mutations, some of which, it was hoped, would lead to plants that bore more heavily or were disease or cold-resistant or just had unusual colors. The experiments were mostly conducted in giant gamma gardens on the grounds of national laboratories in the US but also in Europe and countries of the former USSR.

These efforts utimately reached far into the world outside the laboratory grounds in several ways: in plant varieties based on mutated stocks that were—and still are—grown commercially, in irradiated seeds that were sold to the public by atomic entrepreneur C.J. Speas during the 50s and 60s and through the Atomic Gardening Society, started in England by Muriel Howorth to promote the mutated varieties.

It’s easy to look back at it all as some crazy, or conspiratorial, plot. But the atomic gardens weren’t a secret. They’ve just been forgotten. And it’s clear from reading the primary sources that most people involved were deeply sincere. They really thought their efforts would eradicate hunger, end famine, prevent another war.

If we think of modern GM as taking a scalpel to the genome, mutation breeding by irradiation was a hammer. Amidst all the debate over altered crops, surely evaluating the legacy of the atomic gardens could be useful.

I think one way that science has failed the public is by not making its results accessible, often with the implicit—even explicit—excuse that non-scientists somehow aren’t smart enough to understand them, which is self-serving tosh. It’s interesting that public engagement was desired, and sought out, during the Atoms for Peace program of which the atomic gardens were a part. It was a time when the atomic scientists who had been sequestered during the war began to speak strongly into the public sphere about their science and its implications, to enter the cultural discussion in the way that these atomic experiments—which are still ongoing—should now.

Plus, the atomic gardens are an amazing human story—with Muriel carrying around atomic potatoes in her hand bag and C.J. irradiating seeds for science students—who wouldn’t want to hear about that? Muriel and C.J. were exemplars of a nuclear enthusiasm that hasn’t been nearly so examined historically as has nuclear protest. It’s fun to look back and laugh, to shake our head with hindsight, but the less comfortable part of it is to examine our own enthusiasms, to ask what their unanticipated consequences might be.

Pruned: Muriel Howorth is a major character in this story. Can you elaborate her role in this post-war phenomenon?

Johnson: Muriel is one of my favorite parts of the story and my upcoming article for the British Journal for the History of Science is all about her nuclear enthusiasm. I was able to locate her remaining family, they’re lovely, and they still have a trunk of her things which they made available for my research, and her own personal geiger counter! 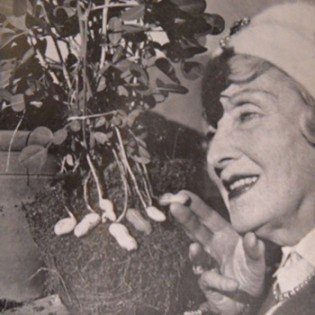 The atomic peanut dinner party sparked Muriel’s involvement with atomic gardening, but it was in some ways a culmination of ten years of work during which she had acted as a tireless booster for all things nuclear: forming two societies to promote atomic science to the layman, publishing books and a journal with the same aim, writing the biography of a Nobel prize-winner, and even staging a “Radioactivity Jubilee” and an isotopic pantomime in which she and a dozen ‘Atomic Energy Associates’ danced out atomic forces.

Muriel was also the only person at the time speaking specifically to women about the new science, and encouraging them to take an active role; she had a Ladies Atomic Energy Club whose aim was expressly to bring women out of the kitchen and into the atomic age.

By her own account, Muriel originally hadn’t thought beyond serving the NC4X peanuts to her guests at the dinner party. It was only afterwards, seemingly disappointed with their reaction, and wondering what to do with the leftovers, that she thought of popping some in the soil to see how they grew. (Read More)

Click here to cancel reply.
« Ai Wei Wei With Milk
Higher Education has Increasingly Become a Scam »
We use cookies to ensure that we give you the best experience on our website.
If you continue to use this site we will assume that you are happy with it.