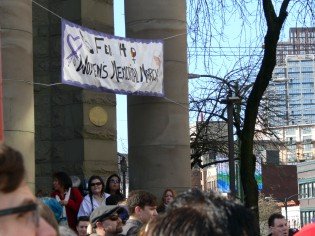 A few weeks after a Coast Salish woman was murdered on Powell Street in 1991, about 30 women decided to organize a march to lay roses at the sites where she and other women in the other Downtown Eastside had died, according to Marlene George.

It grew from there into an annual event, where marchers stopped at sites around the neighbourhood where women were killed or were last seen. Last year, the march drew an estimated 4,000 people.

On Monday, the 20th annual Feb. 14th Women’s Memorial march will wind its way through the streets of the Downtown Eastside, stopping at about 20 memorial sites. 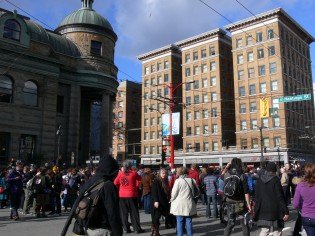 The main goal of the march, said George, who chairs the event’s organizing committee, is the same as it was when the first memorial was held – to honour the women who have died as a result of violence, or whose disappearances remain unsolved.

“For the missing women, there’s no answers for those families,” she added. “There’s no place to go and leave a rose or anything so they come to participate and in many cases to be together to remember their daughters.”

Members of the organizing committee for the march say it’s also intended to raise awareness of violence against women in the Downtown Eastside, as well as other challenges facing women in the community, such as access to housing and health care.

According to George, many of the women living in the poverty-stricken neighbourhood don’t reach the age of 65, but die much younger, in their 30s or 40s.

Organizers say the issue is now more on the public’s radar than when the small group of women first gathered in 1991. But they argue there are still discrepancies in the amount of public attention paid to the death of women from the Downtown Eastside.

Groups such as the Walk4Justice organizers, the Native Women’s Association of Canada and Amnesty International have pointed to a country-wide trend that they say has seen more than 3,000 women go missing or been murdered, including nearly 600 aboriginal women.

The march in Vancouver will coincide with similar events across the country, in cities including Victoria, Calgary, Edmonton, Saskatoon, Toronto and Ottawa.

Click here to cancel reply.
« The Student Loan Swindle
Nourishing the Planet: Empowering Women to Feed Communities »
We use cookies to ensure that we give you the best experience on our website.
If you continue to use this site we will assume that you are happy with it.