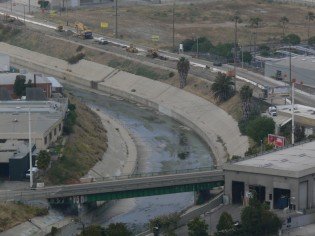 Have you ever seen that documentary about the hugest urban community garden in the world that was bulldozed by the city of Los Angeles? It is a real tear-jerker. A truly disturbing film. Guess what? LA is at it again. They are planning to increase the cost per plot for community gardens from $25 to $120 in 2011. What an increase! Los Angeles has also been notorious for pulling up guerrilla gardens. Los Angeles is a fantastic city. I have lived there on and off since we used to visit my grandparents in Alhambra when we were kids. In fact, I went to high school at John Muir in Pasadena, and went to college there as well–despite the crazy excesses of that city, I really like the place.

Thanks to Homegrown Evolution for bringing this issue to our attention:

The City of Los Angeles Department of Rec and Parks just announced fee increases for community garden plots. The rental of a 10 by 20 space will go from $25 to $120 a year. In the midst of an economic crisis, when the city should doing everything it can to encourage growing food in the city, we get this.

The good news is that, unlike national politics, we can make a difference by getting involved at a local level. I was alerted to this short-sighted fee increase by my friend Stephen Box who is running for city council in district 4. It’s about time that we got rid of the machine politicians that run Los Angeles and who oversee a vast and incompetent bureaucracy. It’s time for a change. If you live in district 4 vote for Stephen Box next March. If you live elsewhere, attend meetings, write letters and run for office.

View the trailer for the film The Garden, mentioned above–the largest urban garden in the world (14 acres), which was bulldozed by LA in 2008: