There is No “Sustainable Biofuel” 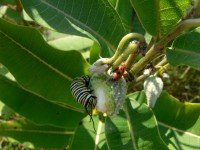 Small farmers that came together in Japan recently have come up with some very practical and do-able solutions. La Via Campesina–The International Peasant Movement–posted this press release from the biodiversity conference last month:

(Nagoya, 26 October 2010) Small farmer delegates from different parts of the world who are members of the international peasant movement La Via Campesina are attending the Convention of Biodiversity conference in Nagoya, Japan. They represent hundreds of millions of small farmers and family farmers in the world.

“We are disappointed in many of the initiatives discussed in the working groups of the conference, such as “sustainable biofuels”. What we call “agrofuels” are actually not sustainable and do not constitute a renewable source of energy. It is really no solution to climate change, or of any benefit to farmers, indigenous people or local communities, but just a way for agribusiness to make more money”.

Many small farmers in the Global South are facing exclusion and bankruptcy due to the expansion of agrofuel plantations. They loose their biodiversity due to monoculture plantations and they lose their land and territories. Hunger and poverty is everywhere in the rural areas. Worse, agroethanol and agrodiesel do not even solve the climate crisis, they actually increase it.

Click here to cancel reply.
« Little House in a Highland Village
Smorgasbord Bruncheon »
We use cookies to ensure that we give you the best experience on our website.
If you continue to use this site we will assume that you are happy with it.