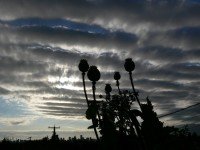 Over the past few years I have seen various information about chemtrails. While I was reading about it I would be concerned, but once finished, I would quickly put it out of my mind. I know I am not the only one who does that when faced with something so outrageous–especially if there doesn’t seem to be anything to do about it when you are just doing your best to make it through the day as it is, but I can’t say I am proud to have ignored this issue. We have been seeing more and more information coming out about chemtrails recently–in fact the UN just agreed to an international moratorium on geo-engineering experiments, so clearly this is something that really is happening and we need to know what they are spraying and why.

So, what are chemtrails? Well, they look a lot like condensation trails (contrails) but are actually microscopic particles of aluminium and barium, other heavy metals, chemicals, bacteria and fungi (a fibre is shown at the bottom of this post). They don’t dissipate like contrails do. These particles and chemicals are being sprayed into the atmosphere in an attempt to reflect radiation from the sun and in that way shade the earth and stop global warming (I know unbelievable)! At least that is the reasons that are generally given–as usual it is begin done for our own good.

In case you think I am totally nuts, have a look at this article in the Guardian, April 2002. The government of the UK admits to spraying all kinds of chemicals and bacteria on the population from 1940 to 1979.

As it turns out, incredibly high levels of aluminium are being found in remote, pristine areas. For example 61,000 parts per billion of aluminium was found in the snow on Mt. Shasta. The maximum level allowed is 1,000 ppb, so this is off the charts. These chemicals have been sprayed since 1997, as many of us know first hand, rates of alzhiemers have been rising aggressively over the past 10 years.

This chemtrail phenomena made me angry because I was so helpless. You can decide what food your gonna eat, whether you’re gonna smoke, what water you are gonna drink, what kind of life you are gonna lead. But not with this phenomenon, then you are just a victim….

Incredibly high levels of aluminium have been found in soil and water all over the world. Trees and other vegetation are weakened by the poor soil conditions, the bark of trees accumulates high levels of aluminium, which is highly flammable. Some fire-fighters think this is why forest fires are so bad lately. Since the UN moratorium has been passed, hopefully we won’t see this happening in the sky any more, but if you search the internet you will see thousands of images and probably realize you have seen chemtrails frequently yourself.

Join the Coalition against Geoengineering to help stop the spraying.

Another point brought up in the below film is that patents were taken out last year in September of 2009 on aluminium resistant seeds. In other words, GMO seeds that will grow in aluminium corrupted soil, when other seeds will fail to thrive. Is this another push to force us to have to buy seeds from Monsanto? There are many questions brought up that need answers. Watch the documentary below:

Check out this short video of a morgellon fibre that was taken from a Chemweb in Nebraska:

This video is very good, a Dutch scientist–Dr. Coen Vermeeren–explains coherently the differences between chemtrails and contrails:

And last but not least here is my little video of the chemtrails over Vancouver BC on New Year’s day 2011: