The community of real milk. 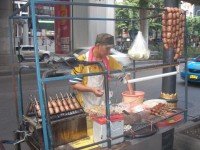 I’ve been talking a lot about raw milk lately, but haven’t really explained much of my own history and why I am so passionate about such a strange thing. While making my weekly journey to pick up my share of raw milk, the bright orange colors of the fall leaves stimulated memories from my own quest for raw milk….

Come to think of it, one of the cowshare members from our community meeting last night asked me how I got interested in raw milk, so I have had it on my mind. It is really exciting and interesting to meet the people involved in the Our Cows cowshare. In many ways I am glad that Fraser Health has forced us to come together as a community.

I am not really sure when I decided to find a way to drink raw milk. A moment I can put my finger on is a day in the back alleys of Kao San Road in Bangkok. I was killing time, waiting for my visa to Burma to be processed, when I found a book in a remote corner of an overloaded trinket/bookstore: The Traditional Healer’s Handbook: A Classic Guide to the Medicine of Avicenna

I’d always had a passion for exploring the healing properties of foods and traditional eating rituals, but this book was inspiring. The book contains the translation of one of the handbooks of Avicenna and the system of Unani natural medicine. It has helpful and practical information on restoring the balance of the body and described how to use herbs for many different types of remedies. Raw milk often called for as a medicinal treatment used to detoxify and rebalance the body and help some of the worst conditions mentioned.

I took courses in nutrition from various institutes around the world, but kept feeling that something didn’t ring true. I especially found the whole low-fat and calorie counting thing annoying. Finally, I picked up Sally Fallon Morell’s book Nourishing Traditions: The Cookbook that Challenges Politically Correct Nutrition and the Diet Dictocrats

and found out about the studies of the dentist Weston A. Price who travelled the world in the 1920s documenting the deterioration in the teeth and fertility in the people who began eating processed foods. Suddenly everything made sense. I was very fortunate to attend Sally Fallon Morell’s first New Zealand conference in 2002 a couple months later. Ever since, I have been studying my own kind of nutrition, trying out different types of diets and fasts. Observing how my own body responds, as well as reading as much as I can about health and healing.

When I was in New Zealand I was unable to get raw milk. The movement was just starting and I think there was just one dairy that supplied Auckland, at the time. I didn’t have a car and was working all the time so I wasn’t able to join that cowshare, but I hoped one day to drink raw milk on a regular basis. After I left New Zealand, trying to drink raw milk in Burma would have been a pretty stupid move. As it was I did a stupid enough thing by eating a melted popsicle in a remote pagoda. It wasn’t a huge surprise to find ten days later I had a serious case of typhoid. 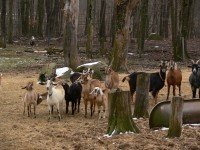 I never imagined at the time that my dreams would come to fruition in 2010 in Vancouver, BC. I especially never imagined that I would have a chance to be a part of this important battle for food freedoms. When I left the US in 1999 I had no intention of ever living there again. When we moved back to New York in 2006 I had a very hard time cooking. I was really scared of the food and I knew that we couldn’t afford to spend a lot of money on organic foods. It is hard when you have that kind of fear of the food you are working with to really cook with your heart. I often found the same thing when cooking in the industry, having to cook up this factory farmed food is soul breaking, and produces a state of disassociation in us towards cooking.

Most of you already know about my recent health problems and the reasons that we are on the GAPS diet, for those of you who don’t, my digestive tract was severely destroyed by fungus from living in a moldy apartment in New Zealand. A year later I got typhoid and used some crazy hard-core antibiotics to deal with it. All of this left me with a ravaged digestive tract that was so toxic I was getting weekly cyclical vomiting spells, sometimes lasting 3 days (YUCK).

In September we decided to implement the Intro Diet stage of the GAPS diet again, which basically consists of rich broth carrot soup for about three days, to which you slowly begin adding in foods and see how you do. I found when adding dairy back in I would instantly have a reaction, so we stopped eating dairy for a couple weeks. I then started adding in yogurt made from the raw milk and that was fine. When I added in keffir I had to start with small amount but very soon I could soon drink it with no problems. During these few weeks I soon realized that the type of dairy that I was reacting to was industrially processed cheese and milk. Our healing process has been vastly improved from having access to raw milk. 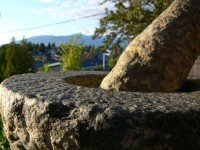 Although I had been reading about the healing properties of raw milk for years, I had never really realized how immediate and potent these abilities were until this experience. The GAPS diet is great because it really sensitizes you to your body and to your digestive and nervous system in particular, therefore it becomes easier to understand the various reactions that your own body has to different foods and toxins. It takes a while to develop this understanding, but taking the time to prepare food from scratch helps to understand and respect the food you are working with. Through both experiences of a) taking time to cook and b) having access to well loved raw material with has given me the kind of love and passion for cooking that I had lost from spending too many years cooking as a chef in the hospitality industry.

In the last month, our healing has suddenly taken a turn. We suddenly seem to be cruising towards having healed bodies. We both have more positive energy than we have in ages. It is as if the big uphill struggle of removing the toxic overload on all of our various systems has finally been relieved to the point where our body’s organs can focus their energy on healing again. I also get the impression that my intestines are finally able to absorb nutrients again–which speeds up the healing process ten-fold. I am sure there are other healing crisis ahead but I think we are nearly in the clear, thanks in a big part to raw milk.

When I fled North America in 1999 in fear of the unknown GMO’s and other chemicals and pesticides in the food system, I had no idea that I would one day be back in the ranks of those fighting for food freedom by joining a small local cowshare simply to heal my digestive system. When travelling the world, one of the things people notice is how the rest of the world loves to mimic the US, while criticising the very thing they are imitating. Everywhere I have been in the world I have seen the culture of consumerism, which the US so foolishly promotes, taking over. As a result I think it is even more important for us to make these changes here now. If North America can change our culture to support small local farms, respect organic and diverse gardens and decentralize our food systems, it is possible this attitude can be quickly exported. That way everyone can get back to their own traditional methods of food preparation before they are completely destroyed. While I say this I also want to make it clear that I know we are learning most of this from indigenous groups in the first place and I am speaking of the institutions and corporations that are promoting the outdated consumer mode.

In order to know what water is
you have to be thirsty,

In order to know what bread is
you have to be hungry,

In order to know what love is
you need to drink (raw) milk.*

Although we used to get raw goats milk from a local farm when we lived in New York, it is very nice to be involved with a cowshare like the one we have here in Vancouver. With the recent pressure we have been getting from Fraser Health our community has had to come together and it is really wonderful to find such like-minded friends in our extended cowshare family. I have just been so amazed by the powerful spirit of community and integrity that this group of people who believe in the healing power of raw milk, that it feels in a way like coming home.

Michael Schmidt, who is organizing an amazing initiative to support and organize cowshares across Canada, also feels that the community spirit of the cowshare is of vital importance to this model and to the fight for basic food rights and freedom to put in our bodies what we feel is right for it without having to have everything approved by some government regulation is crucial in maintaining our ability to be self-realized individuals. He has also started the Cowshare College, which is an excellent idea and will train people both how to set up a cowshare, but how to support your local farmer as well.

*I don’t know where this came from, Michael Schmidt quoted it at the first Our Cow cowshare meeting.

Click here to cancel reply.
« Shame on You – Fraser Health
Astrovision Horoscopes – November 2010 »
We use cookies to ensure that we give you the best experience on our website.
If you continue to use this site we will assume that you are happy with it.