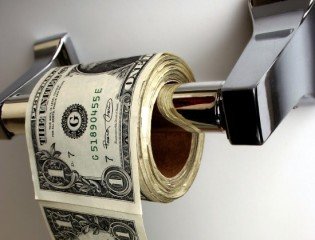 I have been following Ellen Brown‘s articles ever since reading her book Web of Debt about a year ago. I highly recommend it as it is enjoyable–following the story of the Wizard of Oz–as well as a very eye-opening read. In the meantime, she has just posted this revolutionary article about money as a relationship, which I have pulled a few of my favorite passages from. Please take the time to read the whole article here:

Time For A New Theory Of Money

The reason our financial system has routinely gotten into trouble, with periodic waves of depression like the one we’re battling now, may be due to a flawed perception not just of the roles of banking and credit but of the nature of money itself. In our economic adolescence, we have regarded money as a “thing”–something independent of the relationship it facilitates. But today there is no gold or silver backing our money. Instead, it’s created by banks when they make loans (that includes Federal Reserve Notes or dollar bills, which are created by the Federal Reserve, a privately-owned banking corporation, and lent into the economy). Virtually all money today originates as credit, or debt, which is simply a legal agreement to pay in the future.

By understanding that money is simply credit, we unleash it as a powerful tool for our communities.

In an illuminating dissertation called “Toward a General Theory of Credit and Money” in The Review of Austrian Economics (vol. 14:4, pages 267-317, 2001), Mostafa Moini, Professor of Economics at Oklahoma City University, argues that money has never actually been a “commodity” or “thing.” It has always been merely a “relation,” a legal agreement, a credit/debit arrangement, an acknowlegment of a debt owed and a promise to repay.

The concept of money-as-a-commodity can be traced back to the use of precious metal coins. Gold is widely claimed to be the oldest and most stable currency known, but this is not actually true. Money did not begin with gold coins and evolve into a sophisticated accounting system. It began as an accounting system and evolved into the use of precious metal coins. Money as a “unit of account” (a tally of sums paid and owed) pre-dated money as a “store of value” (a “commodity” or “thing”) by two millennia; the Sumerian and Egyptian civilizations using these accounting-entry payment systems lasted not just hundreds of years (as with some civilizations using gold) but thousands of years. Their bank-like ancient payment systems were public systems–operated by the government the way that courts, libraries and post offices are operated as public services today.

Today, paper money is no longer redeemable in gold, but money is still perceived as a “thing” that has to “be there” before credit can be advanced. Banks still engage in money creation by advancing bank credit, which becomes a deposit in the borrower’s account, which becomes checkbook money. In order for their outgoing checks to clear, however, the banks have to borrow from a pool of money deposited by their customers. If they don’t have enough deposits, they have to borrow from the money market or other banks.

[T] he banking system . . . has failed in its primary purpose: to act as a machine for lending into the real economy. Instead the banking system has been turned on its head, and become a borrowing machine.

The banks suck up cheap money and return it as more expensive money, if they return it at all. The banks control the money spigots and can deny credit to small players, who wind up defaulting on their loans, allowing the big players with access to cheap credit to buy up the underlying assets very cheaply.

Like with the gold that was lent many times over in the 17th century, the same home may be pledged as “security” for several different investor groups at the same time. This is all done behind an electronic curtain called MERS (an acronym for Mortgage Electronic Registration Systems, Inc.), which has allowed houses to be shuffled around among multiple, rapidly changing owners while circumventing local recording laws.

The bankers have engaged in what amounts to a massive fraud, not necessarily because they started out with criminal intent (although that cannot be ruled out), but because they have been required to in order to come up with the commodities (in this case real estate) to back their loans. It is the way our system is set up: The banks are not really creating credit and advancing it to us, counting on our future productivity to pay it off, the way they once did under the deceptive but functional façade of fractional reserve lending. Instead, they are vacuuming up our money and lending it back to us at higher rates. In the shadow banking system, they are sucking up our real estate and lending it back to our pension funds and mutual funds at compound interest. The result is a mathematically impossible pyramid scheme, which is inherently prone to systemic failure.

The flaws in the current scheme are now being exposed in the major media, and it may well be coming down. The question then is what to replace it with. What is the next logical phase in our economic evolution?

Credit needs to come first. We as a community can create our own credit, without having to engage in the sort of impossible pyramid scheme in which we’re always borrowing from Peter to pay Paul at compound interest. We can avoid the pitfalls of privately-issued credit with a public credit system, a system banking on the future productivity of its members, guaranteed not by “things” shuffled around furtively in a shell game vulnerable to exposure, but by the community itself.

The simplest public credit model is the electronic community currency system. Consider, for example, one called “Friendly Favors.” The participating Internet community does not have to begin with a fund of capital or reserves, as is now required of private banking institutions. Nor do members borrow from a pool of pre-existing money on which they pay interest to the pool’s owners. They create their own credit, simply by debiting their own accounts and crediting someone else’s. If Jane bakes cookies for Sue, Sue credits Jane’s account with 5 “Favors” and debits her own with 5. They have “created” money in the same way that banks do, but the result is not inflationary. Jane’s plus-5 is balanced against Sue’s minus-5, and when Sue pays her debt by doing something for someone else, it all nets out. It is a zero-sum game.

Community currency systems can be very functional on a small scale, but because they do not trade in the national currency, they tend to be too limited for large-scale businesses and projects. If they were to grow substantially larger, they could run up against the sort of exchange rate problems afflicting small countries. They are basically barter systems, not really designed for advancing credit on a major scale.

The functional equivalent of a community currency system can be achieved using the national currency, by forming a publicly owned bank. By turning banking into a public utility operated for the benefit of the community, the virtues of the expandable credit system of the medieval bankers can be retained, while avoiding the parasitic exploitation to which private banking schemes are prone. Profits generated by the community can be returned to the community.

For capital, a state bank could use some of the money stashed in a variety of public funds. This money need not be spent. It can just be shifted from the Wall Street investments where it is parked now into the state’s own bank. There is precedent establishing that a state-owned bank can be both a very sound and a very lucrative investment. The Bank of North Dakota, currently the nation’s only state-owned bank, is rated AA and recently returned a 26 percent profit to the state. A decentralized movement has been growing in the United States to explore and implement this option. [For more information, see www.public-banking.com.]

We have emerged from the financial crisis with new clarity: Money today is simply credit. When the credit is advanced by a bank, when the bank is owned by the community, and when the profits return to the community, the result can be a functional, efficient, and sustainable system of finance.

Please note the above is not the full article which is much more detailed.

Click here to cancel reply.
« Canada Raw Milk Farmer’s Call To Arms
Little House in a Highland Village »
We use cookies to ensure that we give you the best experience on our website.
If you continue to use this site we will assume that you are happy with it.