Little House in a Highland Village

Many, many years ago, when I was about 18 months old, our family took a trip around the world to move to Mt. Hagen, Papua New Guinea. It was 1975, just after Australia had granted Papua New Guinea independence. Most of the government houses were empty since the Australian administrators had left, and for the first few years we were there, we lived in town in one of these houses.

When we had to move out, we house hopped for perhaps a year, staying in some very interesting places–one was out on a tea plantation, and another had tons of Rhinoceros beetles, which would make very loud hissing noises if you poked at them. Finally, we found a place in a village about 20 minutes drive from the town of Mt. Hagen. The village was called Bomrui because it had a hill in the centre of it that had been accidentally flattened by the allies during WWII. On top of the hill was the villages pride and joy–a large A frame church. Our house was just down the hill from the church and our roof was just about level with the floor of the church.

It was a lovely house with a flat tin roof. Whenever it rained (which was a LOT during the rainy season) the sound of the raindrops falling on that roof as we drifted off into dreamland created a beautiful lullaby we still dream of. The walls were all made of bamboo matting. The house was slightly raised from the ground about 2 feet. When we moved in it had three rooms, one of which was our father’s office and the babies room combined. Us three older girls shared a large room with a double bed and a bunk bed. There was a proper bathroom with a shower, toilet and sink and a dining room and kitchen. The house had a large yard with a big avocado tree and was fenced in to allow for a garden and keep out the pigs that often roamed about quite freely. Around the back of the house were three large water tanks that stored the rainwater, which was some of the best water we have ever drank. Between these tanks and our house was a small hand pump to pump the water from these tanks up to the tank on the top of the roof. That tank supplied the house with running water.

One of our chores, every morning and evening, was to go out to the pump and do 200 pumps each. If we were lucky we would be the last one pumping and the tank would overflow before we got to 200. I learned to count standing by that pump every morning and evening working away at it. We used to listen carefully for the sound of the water first running over, and then, when we heard it, we would jump and laugh and cavort around the tanks to visually confirm that the water was indeed running over and we could stop our arduous labor, singing “Running, over, running, over, my heart is full and running over” as we ran. (Yes my description is a bit over the top, but seriously, it did happen, more than once). 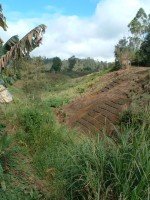 When we first moved into the house we had a running shower, but our water only ran cold. Being so far out of town we were off the grid so we didn’t have any electricity. We took bucket showers, boiling the water on the stove, pouring that into the bucket, then filling it up with cold water until it was just the right temperature. Then, using a dipper, we would shower. It was often my job to shower my little sister, and I soon found if I pretended to be the queen of the fairies, it was easier to get my little sister to happily take her shower. Dipper baths are not a fun way to take a shower, but much better than just plain cold water at 6,000 feet elevation (even if we were only 5 degrees from the equator-it still got cold!). At one point, I remember, my father’s hand slipped with the boiling water as he was pouring it into the bucket and spilled on his bare foot. A blister that was at least 4 inches in diameter instantly rose up on his foot.

Maybe that was the day he decided to track down a solar panel to heat our water, which he somehow did. I think he actually hand carried that solar panel from whatever country he got it from (probably Germany) all the way back to our little house in that small village in Papua New Guinea. After that we had great hot water all the time–even in the cloudy rainy season. The exception being when we let the water run out of the header tank. If that happened, Papa would have to go all the way up on the roof to let the air bubbles out of the pipes before we could get running water again, so we always had to make sure to do our 200 hand pumps every morning and evening to prevent that from happening.

We had a kerosene fridge and oven/stove and after the first couple months of using kerosene lamps, Papa had someone hook up a system using car batteries to run our lights from and we had a regular cozy little home. Papa would haul those car batteries up the hill to our car and off into his office in town and charge them up all day, bringing them back at night so we would have lights. As a result of all the effort we had to put in for our electricity and water, we were very conservative. The car batteries didn’t support other appliances, so we didn’t have a washing machine, blender or TV, although we did have a radio.

In the evenings, after dinner, Papa would read to us from three types of publication. First, he would show us the pictures from an article in the National Geographic and explain to us all the details of the article. Secondly, he would read us some fiction. We loved Laura Ingalls Wilder’s books and JRR Tolkein’s, and CSS Lewis. Papa was great at reading and doing all the different voices and songs. I remember one year, our mother had us all learn how to knit and we would sit on their big bed at night listening to stories from Little House on the Prairie while knitting.

Since we lived in the middle of nowhere and were pretty broke most of the time, part of our family tradition was to make each other gifts. What we were doing, with all that knitting, was trying to make a present of a blanket for our father for Christmas. Each of us made our own different mistakes, and one blanket came out twice as wide, one was very triangle and the other had lots of dropped stitches. It was pretty ugly but it stood the test of time, I wouldn’t be surprised if it was still around. As a result of all of this tradition of handmade gifts, I learned all kinds of crafting from quite a young age. 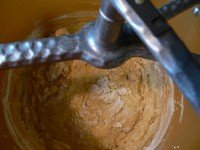 Our mother was a believer in whole grains and yogurt and she used to make a large batch of bread in her bread bucket every week. This was our favorite day, as she would use any left over dough to make a tasty apple-cinnamon ring or cinnamon buns. She also made yogurt. We usually had excellent free-range eggs for breakfast with our toast and peanut butter. The Mt Hagen market was filled with delicious tropical fruits and vegetables and for years my sisters and I had the best teeth around, which I believe came from the great quality of the food we were eating. And the peanut butter? I can hear those die-hards of you asking…where did you get peanut butter in such a remote spot? In some ways the Americans in Mt Hagen seemed to rally around peanut butter, whereas the Australians rallied around vegimite and the English around marmalade.

We used to get our peanut butter freshly ground in bulk from the local American mission station. It came in a huge barrel and we would scoop it out into large jars and put them under the shelf and use them as needed. Usually by the time we were ready to use the peanut butter it had settled to the point where the oil was fully separated. Our daily trip to school was along one of the bumpiest dirt roads I have ever been on. This was often made worse by the fact that our vans were quite old and often needed a push to get started in the morning. On top of this, in the rainy season it was nearly impossible to get up the mud slide of a hill that we had to get up to get to school, and then up another one to get home again.

We all developed amazing skills at working together to get our van up those muddy hills. Our father’s driving skills were amazing, aiming for the top of deep ruts in the red mud of those hills. The rest of us would pile into the back seat and bounce up and down over the tires to add as much weight as we could to gain traction. We found the bouncy roads to be very helpful in mixing the peanut butter and oil up again. A week or so of that treatment–with a jar of peanut butter bouncing away on the front seat of our van, up and down those muddy hills–was often enough to get the peanut butter perfect for spreading on our morning home-made whole wheat toast.

Click here to cancel reply.
« Money As Relationship
There is No “Sustainable Biofuel” »