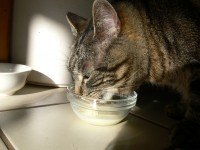 Last night I had an amazing dream. It was about the current war between the small scale farming and the huge factory farm industry. In the dream it was clearly a war, with all the blood and gore, intrigue and propaganda we associate with Vietnam, Iraq and Afghanistan. I don’t think the dream really had a conclusion, but it pulled together much of what is going on with the fight for food rights these days. The conclusion to this war depends on us.

As many of you know, from my enraged tweets and posts over the last couple weeks, the province of British Columbia is currently trying to shut down our local cowshare. The Canadian champion of local raw milk, Michael Schmidt has stepped in and we had a town hall meeting a week ago, where I finally got to meet some of my cowshare family. One of my new family members made a comment on facebook that really hit home for me. It went something like this:

“We may be the last generation who has the ability to make a choice about our food freedoms.”

The battle against small dairies who provide raw milk in North America has really stepped up these last couple years. As Michael Schmidt mentioned at our meeting, Canada was the flagship G8 country that had total monopoly over milk sales. Now local cowshares are cracking that monopoly, and Big industry and government are not happy. When Michael Schmidt won his case for his cowshare in Ontario last year, BC put in a regulation declaring raw milk to be a hazardous substance (like some kind of toxic chemical)!

As many people were saying at our cowshare meeting, this isn’t really a battle over raw milk as the industry would have you believe. It is a battle over health freedom, food rights and ultimately profits.

Food is the last thing that government has to take over to control people’s thinking. -Michael Schmidt.

This is very true, in fact it isn’t just raw milk Big industry is trying to shut down, they are doing their best to hyper-regulate the whole food industry (see S 510: FDA Food Safety Modernization Act), as well as what types of fats are used, as we have seen in the restaurant industry with them removing hydrogenated fats–yet not replacing them with traditional fats used for deep frying like tallow or lard. In the UK there are various groups trying to put a tax on certain types of ‘junk food.’ This sounds very nice, unfortunately, once again, the fats they approve of are highly refined and GM soy and canola oils which have been proven to damage hormones and the nervous system, among other things. Despite these agencies claim to be protecting our health with such regulations, these groups often approve of sugar and flavor substitutes (aspartame, MSG) that are incredibly damaging to the nervous system. Read this incredible interview with Emmanuelle Garcia director of the recent film The Idiot Cycle:

I used to notice my dreams often seemed more or less vivid depending on what I eat, as a result I connect dreaming to the micro-organism activity in my gut. Recently this has become more apparent to me. For a few years now I have noticed I don’t dream like I used to. My gut flora was severely damaged by mould, antibiotics and typhoid a few years ago. Since then I have been struggling to repair it, finally going on the GAPS diet earlier this year. Recently I read a book, The Secret Life of Plants

, which discusses the physical, emotional and spiritual relations between plants and man, this gave me the idea that we can also communicate with our gut micro-organisms.

For the past couple weeks I have been focusing on cleaning out the pathogenic organisms from my small intestine. To do this I have been taking a bath at night and visualising the repair of my gut by the lacto-bacilli and other micro-organisms. I have been amazed by the results with my digestive health, interestingly my dreaming has become more vivid all of a sudden. I personally believe that not only do these micro-organisms help us to digest our food, but they also help us to digest and integrate our daily experiences. The sanitation war we rage against micro-organisms and our irrational fear of them has prevented us from understanding how powerful our symbiotic relationship can be.

I watched a expose of the large dairy industry last night before I went to bed, so I am sure that is what influenced my dream. It is really shocking what Big Dairy is doing to cows. Please read this article, watch this clip, and let me know what you dream of tonight 🙂

Another great article about the raw milk battle here.

Click here to cancel reply.
« Astrovision October Horoscopes
October Update »
We use cookies to ensure that we give you the best experience on our website.
If you continue to use this site we will assume that you are happy with it.