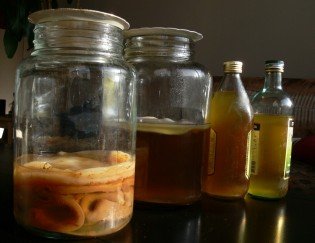 Limited Time! Twitter Contest! WIN a Free SCOBY Brew Now Kit (provided by LA’s Kombucha Mamma and valued at $35- see it here).  All you have to do is follow @helladelicious and @kombuchakamp on twitter by Sunday, August 15th, then Tweet this message: “Win a Brew Now Kombucha Kit from Kombucha Kamp, RT and follow @helladelicious and @kombuchakamp by 8/15”. Good Luck! Visit Kombucha Kamp’s Contest Page Here

A special thanks to Hannah Crum who is the Kombucha Mamma, and owner of KombuchaKamp.com for this article giving us the low-down about what has been going on in the US with the kombucha recall. She also conducts workshops about Kombucha year round, for anyone who wants to take control of their own kombucha!

As long as humans have roamed the earth, they have turned to Mother Nature to improve their health. Kombucha is an ancient folk remedy that is enjoying a huge resurgence in popularity. Purportedly discovered during the Qin Dynasty (221 BC) in China, 21st century peeps are reclaiming this sweet and sour tonic to aid in the digestion of our over-processed diet and to boost immunity in our increasingly toxic world.

So, what’s the dealio with the recall? In short, some Kombucha brands are testing at higher than permitted levels of alcohol to be legally considered a non-alcoholic beverage. All beverages that contain sugar ferment, including sodas and fruit juice. Since most of the time the fermentation results in less than 0.5% alcohol by volume – the legal limit set by the FDA for non-alcoholic beverages – it isn’t required to be listed on the label. Yet again, those who want you to be sick or addicted to their synthetic pills are pushing their fearful message to scare uninformed people away from discovering a path out of their illness and off the drugs.

A bit of simple Kombucha science to further understand the recall: Kombucha is a symbiotic, near-lichen comprised of yeast and bacteria that work together in symbiosis. They build a cellulose structure (zooglea = living skin), kind of like a condo but they live on separate floors. The fermentation process is 2-fold: first, the yeast consume the sugar and excrete alcohol; then, the bacteria consume the alcohol and excrete healthy B-vitamins and amino acids. Under normal brewing conditions, the resultant level of alcohol is below 0.5%. However, this changes when you introduce flavorings, such as fruit or ginger; the naturally occurring sugars in the flavorings reactivate the yeast, creating more alcohol.

It is this secondary fermentation that has caused the voluntary recall, and a great many brands of Kombucha are already back on the shelf (some never even came off) as they have found various solutions to the issue that satisfy the alcohol limits. Nearly all brands will be back and expect even more new brands to attempt to fill the temporary shortages, though if you brew at home, you are never without a 100% organic, raw, fresh supply of your very own. And it is SUPER easy to make Kombucha safely at home.

IMHO, Kombucha is intended to be taken as a medicinal elixir rather than as a replacement for water. In fact, you should increase the amount of water consumed when drinking Kombucha because the natural detoxification process requires it to flush the toxins from the system. Those who are accustomed to drinking Kombucha on a regular basis can handle larger amounts.

Humans have survived for thousands of years by learning to trust their instincts. We have lost our confidence, lost our direction amid a constant bombardment of misinformation, amid the artificially constructed world built around supply rather than demand. But if you start asking your instincts to guide you, it is amazing how quickly they return. Kombucha is one of nature’s many gifts that help support our heath on this exciting and challenging journey. Try it for yourself and see if it has a positive effect for you!