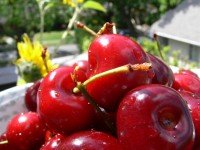 One of Hella Delicious’ facets is the desire to have global connection, while supporting the local movement. I like the local movement as it obviously is sensible and better for the environment as well as your economy, but honestly I doubt I could ever do a fully local diet. I love spices too much and think they are probably best grown in places like Indonesia, where many of them originally came from. To be honest a world where the currency is black peppercorns doesn’t seem that aweful to me, better than digging huge holes in the ground for sparkly gold or diamonds while killing the natives, right?

All that aside, we really need some help with posting, twittering, articles and photos. I would also love to get a collection of photos and videos of farmers markets around the world, I recently found a really nice one of the Mt. Hagen market. I would like also to look more deeply into other areas of the DIY culture, for example–I was researching community currencies at some point last year and have heard that they have been really taking off recently so I would like to focus the month of August on cleaning up and updating the website as well as looking around the globe at how different groups are creating their own rules for currencies. If anyone would like to do an article about their region I would love it!

Also if anyone has any other suggestions about what they would like to see on the website or design type changes or if you would like to advertise, please let us know. We will also do profiles for contributors and update the photo galleries (finally) and (hopefully) make the site easier to find your way around. A lot of information really gets lost!

Oh also, if anyone is interested in advertising, please let us know, we prefer to advertise within the Hella Delicious community as we don’t really want to advertise to you but it would be nice to make a bit of money with all the work we put into www.helladelicious.com. Hopefully spending the month of August looking into community currencies will give us some ideas for how to monetize the site a little. I have started using flattr which is a micro-finance type arrangement that might be useful but is still in it’s early stages.

Can’t wait to hear your feedback :).

P.S. I am currently working on a grain-free cherry pie recipe. The cherries have been fantastic in BC this year. In fact, I have probably eaten more cherries in the last month than I have in my entire life previously. So fantastic! I am going to go attempt a almond torte with cherry filling now. – yum