There was so much going on for Valentines Day this year that I didn’t have time to think about chocolates and roses. Instead, I was thinking about joining in the celebrations to welcome in the Year of the Tiger and eager to get to Chinatown before the whole show was over since rumors said the festivities would be closed down early due to the Olympics. In fact, our bus couldn’t get through downtown, as soon as we realised this we headed for the nearest skytrain station and squeezed ourselves in among the throngs of people and headed for the Chinatown/Stadium stop. 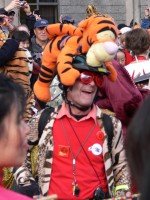 We got to Chinatown just in time to see the very end of the parade, completely missing the dragon (it turns out that the Chinese New Year festivities in Richmond are much more grand so we will be heading out that way next year!). I was just starting to fret that this was a bad omen for me. (I was especially eager to be involved in the celebrations being a tiger myself.) We turned a corner and as we passed the Sun Yat Sen Park, what should we hear but my favorite Carnival Band, all dressed up as tigers, grooving out in the middle of the square, people dancing and climbing on statues trying to get a good vantage point, and my day was immediately rescued. I recalled that I never much liked the parades so much as the cleansing Lion dance ritual that happens along Pender St, which no one, not even VANOC, could put a stop to. 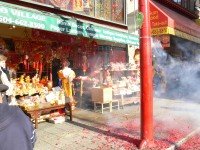 Loud crackling sounds among the crashing of cymbals alerted us to the dancing lions, who were being fed bits of lettuce as a reward for the work they were doing to prepare the stores for the New Year. Long strings of fireworks had been set off, clearing the space momentarily of spectators while throwing up a veil of smoke at the entrance of the store as the lion moved on to the next shop.

We soon had to leave the exuberant festivities welcoming in the Year of the Tiger as we wanted to pay our respects to the 137 women who have gone missing or been murdered over the past 40 years in BC. Chinese New Year this year was on February 14th which was also the 19th annual Women’s March done to honor and remember the women who have been killed or have disappeared. The energies of the crowd gathered around the Carnegie Community Centre, was respectful and sombre, quite different than the energies just a couple blocks away. 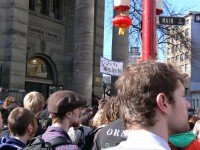 It is estimated around 4,000 people attended this march showing their solidarity with these women that BC is ignoring. Considering that it was Valentines Day, the first weekend of the Winter Olympics as well as Chinese New Year, this number is very significant and should have been taken as a clear signal to the Canadian government where people expect to see some action taken,

B.C.’s First Nations are unified and unequivocal that a public inquiry is critical to helping prevent more deaths and disappearances, but it appears that Abbott will not listen to the Union of B.C. Indian Chiefs, the Assembly of First Nations, advocates for native women, who are all saying that an inquiry is needed to help determine why so many aboriginal women have been, and continue to be murdered in this province.

Aboriginal Relations Minister George Abbott still insists it is not the time for an inquiry. Opposition critic Bob Simpson, repeatedly asked the government to commit to a public inquiry during Question Period at the legislature February 11, but the Minister and his colleagues refused to act. When Simpson asked the Aboriginal Affairs Minister to advocate for a public inquiry at the cabinet table, Abbott dismissed the request, saying that police investigations into individual cases would be sufficient. -Shane Simpson Community Newsletter March 2010 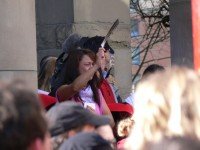 During the march eagles circled above the people, raised the spirits of the multitudes of people who had come together to pray for and remember these women.

Aboriginal activist Jennifer Allan explained to the Straight that the appearance of the eagles symbolize that prayers for the women who fell victims to violence will be brought up to the gods above. –source

Even though the government of BC has shown it’s lack of humanity, the eagles helped to provide a deeper symbol of hope and give us all the determination to continue to demand that this issue be addressed before any more women go missing. The Olympics was a big expensive party and now we will begin to understand the true costs.

To be honest I have long since given up on government and no longer wish to put any energy into trying to play their time-wasting games with their tree-hating stacks of paperwork that has to be completed for every simple little task, so none of this really surprises me. Valentines Day 2010 was a day that really gave me a deeper appreciation of the power of the energies that a group of people that come together in solidarity has. It is good to be aware of this, and to put your energies where you want them to go.

It was very difficult, during the two weeks of the Winter Olympics 2010, to not get caught up in the excited vibrations of the masses of people, and one First Nations young lady even told me that she was against the Olympics, but by the end of it, even she was caught up in the excitement. The whole city was just pulsating with the delirious energy of the throngs. By the end of the first week I was fed up with the whole thing (yeah my attention span for sports is quite limited, unless I am in a game) and could sit back and think to myself things like:

“Wouldn’t it be marvellous if this much energy was pumped into greening the world, or helping people in Haiti and Chile…I wonder how much money Canada sent to Haiti–was it anything like the 6 or 7 billion dollars spent on these two weeks in February?”