I figured since I have been living at a Coptic Orthodox center in the church compound I should probably write about what the Coptic Church is exactly. Although what I know of the Coptic Church is mostly from my observations and conversations I have had with people, I have only read one book on the subject so this is mostly my opinion.

Although I consider myself to be fairly educated, especially about Christianity as a whole, I did not realize until much too recently that the Middle East contained an indigenous Christian population which traces its routes to the first disciples. The Coptic Orthodox Church is one of those Christian populations and traces its roots to the apostle Mark. It currently makes up about 10% of the population in Egypt. 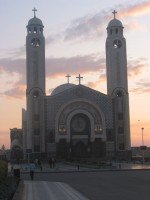 Like other churches prior to the protestant reformation, the Orthodox church is both hierarchical and contains highly symbolic elements in its worship and liturgy. The head of the Church is the Pope who is also the Patriarch/Bishop of Alexandria. From what I have gathered, this Pope is only the Pope for the Orthodox churches located on the continent of Africa, and I think those are limited to the North Eastern African countries. The other Middle Eastern Orthodox churches have Patriarchs, but no-one that they call the Pope. Underneath the Pope are the Bishops who live in the church compounds all over Egypt. I am not sure how many there are, but there must be quite a few. There is one in the city I live in, and another one in the bigger city which is only about half an hour from me by car. Underneath the Bishops are the Priests (Abuna’s, which means “our father”). These Priests are in charge of doing the Mass which normally happens every day and have various other responsibilities that are divided up amongst them for the running of the church and looking after the people in the community. Underneath the Priests are the Deacons, who are just regular lay people that the Priest chooses for their example of morality and dedication to the church and they mostly help out during the mass. All members of the Church are also encouraged to get involved in some way and do some type of service. There are all sorts of youth programs, and most mothers here have to work as well as the fathers in order to support the family, so the church also provides day care every day (which is located right next to my room). So there are also lots of opportunities for people to serve in whatever capacity they are able to.

Apart from this hierarchy, there are also the monks and the nuns. This is a difficult vocation to enter, and the people who want to be either monks or nuns have to go through a grueling trial period to make sure its really want they want and that they aren’t just running away from some responsibility or something. It is a life of total renunciation, and they go through a ritual which is the same ritual that the church performs at someone’s funeral. They are symbolically dead to the world. Which is interesting, because the Pope can only come from a Bishop, and the Bishop can only come from a monk, so it is possible I suppose for there being ulterior motives to some people wanting to be monks.

On the flip side, however, it seems as though a lot of the issues that protestants (myself included) have with churches that focus so much on hierarchy is the abuse of power which is possible. Although there is always a very high possibility of this with any kind of power, it seems as though the system in the Coptic church does a fairly good job of weeding out those who are seeking power to abuse it. The simple fact that the Bishops are chosen by a committee from amongst the monastic community means that they are chosen from people who seek to give up their lives for God. From what I can make out, they are chosen for kindness, for service, for wisdom, and for total devotion in their lives. All of the Bishops that I have met so far, although they are treated like royalty, with everyone kissing their hand and whatnot, are very kind and friendly people. And the lay people of the church legitimately love the Bishops. It is not just because they are the “Bishop,” but the people I have talked to actually love the Bishop for who they are as a person, not just as a title. Specifically with the Bishop that I live and interact with, I can understand why. He is extremely busy all of the time, he has many meetings every day and is always traveling between the cities that he is in charge of to make sure they are running smoothly. But he always has time to stop and crack a joke with the people around, or talk to the young boys he sees running around, asking them if they are staying out of trouble. He genuinely takes an interest in the lives of the people in his Diocese and wants to make sure that everyone is doing okay. So even though as a good protestant, I am personally not much into the hierarchy stuff, and I can’t bring myself to kiss anyone’s hand even though people tell me its just a respect thing, I do appreciate what it means for the Copts here.

The Coptic Church is also very concerned with community development projects, and from what I can tell, most of the organizations that are helping out the community members in smaller towns are run by the different Dioceses. The projects that they do are good as well, and include Early Childhood Education and training for mother’s, cheap or free legal services, helping widowed or single women establish micro-enterprises, and all the rest of the things that the international development community is encouraging towns to do around the world. On top of this, the nuns are also encouraged to do service in the community, and one of my friends who is a nun is always very busy. She is the person that cooks for the Bishop (and the rest of us here that live at the church) so I sometimes help her prepare stuff to cook and she speaks English so its nice to chat with someone that speaks English. Anyway, when she is not cooking for the Bishop one of her service jobs is to go around and visit the poor families in the Diocese and provide them with either food or clothes or money, depending on what they need. She visits up to 20 families a day, and this is one of the biggest expenses that the Coptic Church has, taking care of those that are struggling to take care of themselves (which are quite a few people here). Also a lot of the pharmacies (of which there are a remarkable amount in every town) are run by nuns.

One other aspect which is not really related, but which I just remembered that I thought a good idea, is that one of the Abuna’s duties is to meet with people individually. Each person is encouraged to have a spiritual father who they meet with once a week or so and talk to them about what is going on in their lives. It is like the Catholic practice of confession, except face to face, and it is more like a mentoring relationship. The person will meet with the same Abuna every week, so they can follow up on what was talked about the previous week, and build on a relationship that they already have. From the people that I have talked to, this practice has been very helpful for them, and they always look forward to the time they get to spend one on one with the Abuna.

I understand that most of the things I have said so far are positive aspects of the Coptic Church, and I also understand that most entities attempt to show their best face to newcomers, which I still am. So if there are things that are seriously wrong with the way the Church is run, people aren’t talking to me about it, and I haven’t really noticed much as of yet. There are some doctrinal things which I don’t understand, which maybe some of you could explain to me. Like the concept of the perpetual virginity of Mary. They don’t even call here Mary they just call her “The Virgin” (il-Addara) and I have asked them about the fact that Jesus had brothers, who supposedly weren’t also conceived by God, as well as some other things that the Bible says. They don’t seem to be able to explain those verses in the Bible, but they are certainly adamant that the verses don’t change anything. They also pray to saints and to Mary and ask them to talk to Jesus on their behalf, which I don’t understand. I personally prefer not having a middle-man/woman when I am trying to talk to someone because there is often more of a chance of miscommunication.

The whole experience is very interesting to me, and although I have studied a lot about different forms and denominations of Christianity it is fascinating being a part of such a completely different Christian community. I always ask as many questions of people as my limited Arabic allows me because it is so culturally different. This is my understanding so far of what some of those replies to my questions have been. However, perhaps I will need to revise this after being here for awhile more.

Click here to cancel reply.
« In Memory of Uncle Walter and Betty
The Year of Ubuntu »
We use cookies to ensure that we give you the best experience on our website.
If you continue to use this site we will assume that you are happy with it.