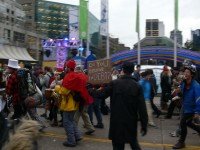 Little by little the curious goats re-emerged from the woods and came close to the dead beast. They found the small creature, took him, and reared him as their own. The little tiger learned to subsist on grass, to adapt his voice to the gentle language of the goats. The vegetarian diet kept him very slim and imparted to his temperament a remarkable meekness. One night when this young tiger among the goats lay awake while the others were sleeping, a great roar suddenly put the flock to flight, and he alone remained in the meadow, without a trace of fear. A fierce old male tiger walked slowly toward him and he gazed in utter amazement at the apparition facing him.

“What are you doing here among these goats?” the mighty intruder demanded, in a voice he could understand. The young tiger only bleated in response. The jungle tiger picked up the young one by the scruff of his neck and carried him off to a nearby pond and forced him to look at his image in its mirror-like surface that shone in the moonlight. “Look at these two faces. Can you see that your face is just like mine? We both have these fine stripes. Then why do you imagine yourself to be a goat, bleating in that funny tone and chewing on grass?”

The little one looked and shivered in wonder. Before he could respond, the older tiger carried him off to his den and offered him a piece of bleeding meat left over from a kill that same night. “Take it, eat it!” When the young one shrank back, the old tiger forced his mouth open and put some meat into it. To the little one’s surprise, it tasted strangely good. Amazed, he reached for more, enjoying every mouthful as the new food filled him with a glowing strength and feeling of pleasure. He stretched out his paws, lashed his tail, and opened his mouth with a mighty yawn, as though he was awakening form a long, long sleep. Then he threw his head back and gave a powerful roar. The older tiger had been watching him intently as the transformation had taken place. “Now do you know who you are?” he asked, and completed the initiation of his young disciple into the knowledge of his own true nature by saying, “Now we shall go off together into the jungle.”

I find this tale especially apt given the forces at play here in Vancouver, BC. The opening ceremony of the Olympics was on the 12th–feelings are extremely mixed but running very high with excitement in all cases. Anti-colonialists or Black Bloc protesters have already bashed in a window of The Hudson Bay Company reminding us that this land was never ceded by the indigenous tribes, so from the get-go us just being here occupying stolen land (me included) is illegal under International law.

Perhaps this year is the time when we will all wake up to the extreme and foolish decadence we are allowing to destroy our world. I think we will realise we no longer have time to ignore it. We have only to look to Easter Island to see what will happen to us if we keep playing our games of excess (be it rock carving, military, sports, food, praying, playing or just watching TV). If we wake up too late our chances of salvaging our world may be gone.