A Healthy Mind in A Healthy Body

Quotes in this post are from Nutrition: A Holistic Approach 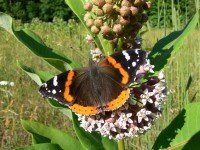 “We have made use of our thoughts to develop techniques which aim to build a civilization based on comfort. Those who notice how narrow and egotistical this self-serving use of thought is may also find, as they observe themselves, that their thinking has become shadowy and abstract; it can no longer lay hold on the reality of the cosmos. Such individuals may begin to wonder what would happen if they served thinking instead of making it serve them. What would be the result of making oneself a perceptive organ for the power of thought, of concentrating one’s whole being in the act of listening? One who practices this art will find himself able, with this selfless new thinking, to enter the realm of living metamorphosis, where thoughts grow and become expressions of the creative thinking of the cosmos. He comes into touch with objective reality, with essential being.” p 45

In 2005 I did a course in biodynamic agriculture in New Zealand which set me on the road to gaining a different perspective on interacting with the world in general. Goethe demonstrated interactions with plants that have long been forgotten in the mainstream, but which form the basis of Rudolf Steiner’s biodynamic agriculture. We are intimately tied to the world through our digestive systems. This is a physical as well as spiritual involvement and as such is extremely beneficial when treated with awareness and attention. Rituals amplify these interactions.

When we first moved to Neversink, NY in 2006 I spent a couple months freaking out as I knew that the majority of the food I was consuming was genetically modified or at least grown with all kinds of chemicals. We managed to get raw goats milk and free range eggs from the school-teacher down the road, but eventually I had to block out the fear I felt of much of the food I was eating. (I fled the US in 1999 when I first became aware of the lack of control we have over our food.)

As a result of blocking this out I began to develop a mental block to cooking and a mental de-sensitizing to the food I was eating. I hope this year, now that we are settled, to be able to find food sources that I can trust so that I can cook with assurance that the food I am eating is not poisoning me. Knowing that your food is coming from a farm where it is well loved and allowed to grow naturally adds a whole other dimension to cooking and allows you to do so with awareness.

I recently had a hair analysis done which showed high levels of pesticides and herbicides in my body (among other things). I developed a sensitivity to industrial chemicals from working in the food-service industry and using heavy duty oven cleaning chemicals and other industrial cleaners. Now I have trouble detoxing industrial chemicals from my cells. Which often causes an overload, giving me migraines and cyclical vomiting syndrome.

“I could easily be thought to subscribe to the view that ‘you are what you eat’. That is a mistaken interpretation of the facts presented. The personality or ego is the primary force in all questions of nutrition, and they are decided by the way the ego acts on bodily processes and masters or is mastered by them. Even the most carefully worked out diet will not help a man to ‘eat his way into heaven’. Rather is the reverse true: food is a support that can be made use of only to the degree that the individual spirit actively transforms it.” -p 74

Biodynamic Agriculture also includes, as ancient agriculture did, a knowledge of the phases of the moon and other planets and how they affect planting, harvesting and the growing of various plants. The gravitational pull of the large bodies in the heavens, such as the planets each has it’s own influence on how plants grow and what they are absorbing from the ethers. In an interesting comparison to how rainbows are formed from water, air and light, Rudolf Hauschka shows how starch is formed from these same elements in the bodies of plants. When plants assimilate the air (carbon dioxide) and the sunlight these elements are condensed into starch.

“A person who realizes that virgin starch is a condensed rainbow comes to a new sense of kinship with plant creation.” -p 75

The starch that is formed in the plant’s green foliage then goes through various changes until it is refined into sugars, these sugars develop into glycocides which create colorful blossoms and scent, in this way flowers are in a sense materialized rainbows. This example of the connection between rainbows and carbohydrates demonstrates how beautiful and mystical our world is, with levels of energy and gravitational pull that normally, because we can’t see it, we disregard or ignore it. This helps to put what we think we know in a different light, and gives us an alternative perspective on how to interact and tune into our world.