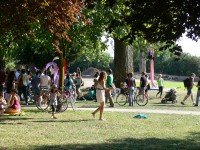 For some reason, that I am still not quite sure of, I have always felt rather offended when someone called me a hippie or compared me to hippies. I recently realized that I have been in denial and have taken the first step in learning to move out of this way of life–admitting that I am, in truth, a hippie.

What has finally prompted this breakthrough? Interestingly enough it came about while reading Vine Deloria’s book Custer Died for Your Sins: An Indian Manifesto

. I have been wanting to read this book for many years and finally got around to it last month. Towards the end of the book he discusses the inundation of hippies to reservations in the summer of 1966 and his description of them suddenly hit home for me. The passage follows… The italicized sections are characteristics that describe me in general.

Yet many hippies whom I met had some basic humanistic beliefs not unlike those of Indian people. Concern for the person and abhorrence for confining rules, regulations and traditions seemed to characterize the early hippie movement. When hippies began to call for a gathering of the tribes, to create free stores, to share goods and to gather all of the lost into communities, it appeared as if they were on the threshold of a tribal existence.

I remember spending a whole afternoon talking with a number of hippies who had stopped in Denver on the way west. They were tribally oriented but refused to consider customs as anything more than regulations in disguise. Yet it was by rejecting customs that the hippies failed to tribalize and became comical shadows rather than modern incarnations of tribes.

Indian tribes have always had two basic internal strengths, which can also be seen in corporations: customs and clans. Tribes are not simply composed of Indians. They are highly organized as clans, within which variations of tribal traditions and customs govern. While the tribe makes decisions on general affairs, clans handle specific problems. Trivia is thus kept out of tribal affairs by referring it to clan solutions.

Hippies, at least as I came to understand them, had few stable clan structures. They lived too much on the experiential plane and refused to acknowledge that there really was a world outside of their own experiences. Experience thus became the primary criteria by which the movement was understood. Social and economic stability were never allowed to take root.

It seemed ridiculous to Indian people that hippies would refuse to incorporate prestige and social status into their tribalizing attempts. Indian society is founded on status and social prestige. This largely reduces competition to inter-personal relationships instead of allowing it to run rampant in economic circles. Were competition to be confined to economic concerns, the white conception of a person as a part of the production machine would take hold, destroying the necessary value of man in his social sense.

With competition confined within social events, each man must be judged according to his real self, not according to his wealth or educational prowess. Hence a holder of great wealth is merely selfish unless he has other redeeming qualities. -p228-230

Anyway, as a result of coming to this awareness of these unfortunate characteristics of mine, I have come to the conclusion that I need to develop more structure, routines and rituals to my daily life. This is something I generally try to avoid like the plague and it has finally gotten to the point where I can see it has become a rather serious problem. I am unable to complete my goals, I often live in a dream world, I feel like I have some great ideas which never really ever come to fruition. Even my health suffers. Perhaps some self control and establishing some patterns and routines will help me to settle down, become more grounded and actually accomplish something.

Interestingly enough all of my horoscopes and advice from wise friends seem to point in this direction also (and have for the past few years–although I generally have ignored them and stubbornly continued down my own fantasy pathways). Let’s hope I can manage to make a break-through here–after all, as they say the first step is to admit you have a problem!

Click here to cancel reply.
« Reflections on Language and Culture: Egypt
Sports, Weddings and Language Experiences »
We use cookies to ensure that we give you the best experience on our website.
If you continue to use this site we will assume that you are happy with it.