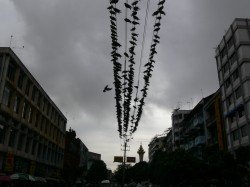 I recently got a recommendation to read the massive book Shantaram

by Gregory David Roberts and let me tell you it is worth every second. I feel as if I am right there with him in the slums of Bombay, fighting off feral dogs, and tending to the rat bites of the local children. If you haven’t read this book it is a must read. Here is a passage I just read, I am only about halfway through the book at the moment, but this struck me as very true, it is only one million evil men who are driving the destruction of earth and the species living upon her.

‘The world is run by one million evil men, ten million stupid men, and a hundred million cowards,’ Abdul Ghani pronounced in his best Oxford English accent, licking the sweet honey cake from his short, thick fingers. ‘The evil men are the power–the rich men, and the politicians, and the fanatics of religion–whose decisions rule the world, and set it on its course of greed and destruction.’

‘There are only one million of them, the truly evil men, in the whole world. The very rich and the very powerful, whose decisions really count–they only number one million. The stupid men, who number ten million, are the soldiers and policemen who enforce the rule of the evil men. They are the standing armies of twelve key countries, and the police forces of those and twenty more. In total, there are only ten million of them with any real power or consequence. They are often brave, I’m sure, but they are stupid, too, because they give their lives for governments and causes that use their flesh and blood as mere chess pieces. Those governments always betray them or let them down or abandon them, in the long run. Nations neglect no men more shamefully than the heroes of their wars.’ -p349

‘And the hundred million cowards,’ Abdul Ghani continued, pinching the handle of the teacup between his plump fingers, ‘they are the bureaucrats and paper shufflers and pen-pushers who permit the rule of the evil men, and look the other way. They are the head of this department, and the secretary of that committee, and the president of the other association. They are managers, and officials, and mayors, and officers of the court. They always defend themselves by saying that they are just following orders, or just doing their job, and it’s nothing personal, and if they don’t do it, someone else surely will. They are the hundred million cowards who know what is going on, but say nothing, while they sign the paper that puts one man before a firing squad, or condemns one million men to the slower death of a famine.’

‘So, that’s it,’ he concluded. ‘The world is run by one million evil men, ten million stupid men, and a hundred million cowards. The rest of us, all six billion of us, do pretty much what we are told!’

‘This formula–the one million, the ten million, the hundred million–this is the real truth of all politics. Marx was wrong. It is not a question of classes, you see, because all the classes are in the hands of this tiny few. This set of numbers is the cause of empire and rebellion. This is the formula that has generated our civilizations for the last ten thousand years. This built the pyramids. This launched your Crusades. This put the world at war, and this formula has the power to impose the peace.’ -p350