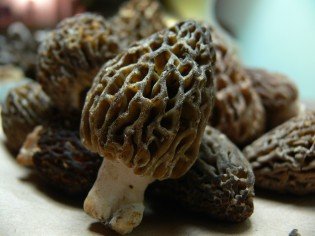 Spring is morel season, and Greg A. Marley in his book Chanterelle Dreams, Amanta Nightmares: The Love, Lore, and Mystique of Mushrooms, gets us primed for mushroom hunting with Clyde Christensen’s Foolproof Four: mushrooms that are easy to identify and have no look alikes. The first of these is morels (Morchella), the second puffballs (Calvatia, Lycoperdon), then the sulphur mushroom (Polyporus sulphureus) and shaggy mane (Coprinus comatus) is the fourth. Marley gives a personal account of his mushroom walks, favorite ways to cook and store each mushroom, time of year to look for them, the sort of weather they like as well as which environment they prefer or which trees they grow in symbiosis with.

It is very helpful that the book also includes a selection of color photographs of mushrooms to assist with identification. Aside from the mushroom identification, Greg Marley goes into other often forgotten areas, for example, in his discussion on truffles he delves into old forest preservation and the inter-dependencies of various species involved. Flying squirrels rely on truffles for food, truffles rely on such creatures to reproduce. In the last section of the book, he even has a description of how to grow a mushroom garden with helpful tips on how to set up mushroom friendly areas of your yard, how to inoculate a branch, as well as where to get other equipment.

There are lots of interesting tid-bits and little known facts about mushrooms provided:

…mushrooms, with their relatively high protein content and vitamins, are a good source of food. Russians began referring to them as “Lenten Meat” when the Tsarist-era Rusian Orthodox Church required believers to fast more than 175 days per year. -p9 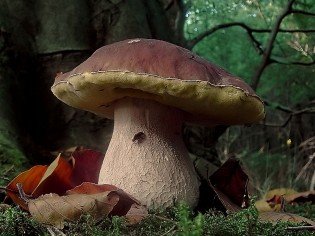 He also goes into detail about psycadelic mushrooms and talks about his concerns in that area but the importance of knowledge being available to identify mushrooms as well as what can happen if taking a mistaken mushroom. In Europe, mushrooms poisoning is fairly common and doctors are very well trained in removing the toxins from the body before kidney failure. In the US it is less likely to be something that is commonly treated by physicians.

He talks clearly and frankly about the dangers of mushroom hunting, but also very clearly states that the perceived risks are higher than they really are, especially if you follow a few basic guidelines, which he lays out in detail.

Deaths by poisonous mushrooms are rare, in spite of growing concerns that mushroom poisoning is on the increase. The perceived risk far exceeds the reality. Though medical providers see several thousand people each year due to concerns regarding mushroom poisoning, almost none of those people die and very few require medical intervention beyond activated charcoal and anti-emetics, if medical intervention is needed at all. -p91

The thing to be aware of with wild mushrooms is that different people react differently. Whether you will react or not depends on the health of your gut, your immune system, how many environmental toxins your body is already dealing with, if you have been drinking alcohol, if you have allergies and various other things. After reading this section of his book, we had friends over for dinner and soon got to talking about mushrooms, one of the guests was highly reactive to mushrooms and getting to be more so in recent years. As I heard more and more mushroom run-in’s from her, (which were all from mushrooms that her friends were eating with no problems), I was reminded of all of the things I have learned about the gut and the beneficial micro-organisms. We are all different and have varying levels of optimal gut health. It is important, therefore, to always start with small amounts when first consuming wild mushrooms. Another thing to remember is that some mushrooms have to be cooked in order to remove their toxins and become edible.

Did I mention the great mushroom recipes he provides? I especially appreciate them as they are traditional and include lots of delicious butter (goes great with mushrooms!). This is a true gem of a book.

He talks about the ancient religions of Northern Europe and looks into the mythology of Santa Claus with his red suit and reindeer that fly. Reindeer are big fans of the Amanita Muscaria: 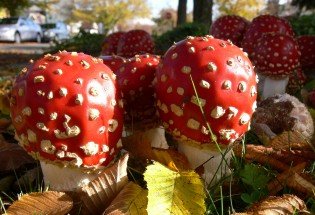 Under the influence of the fly mushroom, the normally docile reindeer become quite frisky and difficult to manage and stories abound of their leaping and cavorting across the tundra after a meal of the bright red fruit. Reindeer not only seek out the mushrooms to eat, but also will seek out the urine of other reindeer or the urine of humans who relieve themselves after eating fly agaric. The mushroom’s psychoactive chemical is excreted in urine and the reindeer can smell it. -p150

Mushrooms are behind many religious beliefs and rituals around the world:

The Aztecs’ use of the name teonanacatl, which is translated as “God’s flesh,” reflects the belief that the hallucinogenic mushrooms were part diety, God’s flesh, or a gift from the gods. -p165

Not only is this a book chock full of intimate information on a wide variety of mushrooms, helping the novice begin to develop relationships with the various fungi, but it is very enjoyable to read. It is one of those books that I love to read really slowly, so that I have plenty of time to really get to know the information and hopefully embody it a little. My next mission is to get a good mushroom guide for the North West and find some good spots to go mushroom hunting. Some call it “the silent hunt’. I definitely recommend this book. Thanks Chelsea Publishing!

Like the Amanita Mushroom image? I have posters available via zazzle: buy a fly mushroom poster.